After offering up our picks for the best films of the first half of the year, we enter the second half with a strong release slate. Arriving this July is a stellar set of documentaries, a few promising wide releases, new films from some of the century’s most prolific directors, and much more. Check out my picks below.

15. Eyimofe (This Is My Desire) (Arie and Chuko Esiri)

Before an eventual Criterion release, Janus Films will bow the debut feature by Nigerian-raised, New York-educated twins Arie and Chuko Esiri, which recently played at Berlinale, New Directors/New Films, and more. David Katz said in his review, “Fatih Akin’s The Edge of Heaven and Wong Kar Wai’s Chungking Express have been directly cited by the filmmakers as inspirations for Eyimofe, and I would also mention Amores Perros for its interleaving structure and top-to-bottom dissection of a megalopolis, teeming with such a bevy of unhappy people. But the sometimes plain and unadorned visual style fails to keep pace with the story’s thematics; the film’s overlaps and differences to Mati Diop’s Atlantique are also worth noting.“

Where to Watch: Theaters (July 23)

Legendary actress Isabelle Huppert is partaking in quite a bit of fun for a new French crime comedy. Mama Weed, directed by Jean-Paul Salomé, finds the star playing a French-Arabic translator for the Paris police anti-narcotics unit who gets caught up in the drug game to pay for the mounting bills to take care of her aging mother. Opening last fall in France to a successful box office, the film will now arrive in the U.S. this month.

13. Being a Human Person (Fred Scott)

With his latest film About Endlessness finally arriving after some pandemic delays (and making for one of the year’s best thus far), there’s more Roy Andersson on the horizon––not a new film by, but rather a documentary created on the set of his latest work. Fred Scott’s Being a Human Person takes an in-depth look at the Swedish master’s meticulous production design and unique approach to filmmaking. If you have yet to catch up with Andersson’s work, Film Forum will also be holding a sidebar of his Living trilogy.

Where to Watch: Theaters (July 2)

One of the most influential figures in dance has been given the documentary treatment. As Dan Mecca said in his Sundance review, “Has any choreographer mattered more to American dance than Alvin Ailey? The documentary Ailey, directed by Jamila Wignot, makes a good case that there has not. Comprised of amazing archival footage, peer interviews, and choreographer Rennie Harris prepping a modern-day performance in honor of the artist, Wignot paints a full picture of a complicated man. Born in the middle of Texas during The Great Depression, old recordings of Ailey recount his picking cotton with his mother (his father was non-existent in his life), then later on seeing Katherine Dunham (and her male backup dancers) perform live. The shock of watching somebody that looked like him produce such wonderful art emboldened him to pursue the work himself.”

Where to Watch: Theaters and VOD (July 23)

To call a Quentin Dupieux film amusingly strange is rather obvious, but his latest work is one of his most entertaining in this regard, bouncing back to a bit more lighthearted territory after the dark-tinged maniacal nature of Deerskin. Mandibles follows two idiots who find themselves in the possession of a giant fly and are desperate to earn a buck, and David Katz said in his Venice review, “Perhaps we’re comedy-starved in today’s cinematic landscape, but Dupieux’s rollicking adventure generates rare laugh-out-loud moments and even a few applause-worthy bits. “

Where to Watch: Theaters and VOD (July 23)

10. Enemies of the State (Sonia Kennebeck)

One of the best docs from last year’s TIFF slate. Jared Mobarak said in his review, “This ambiguity is where Enemies of the State becomes a must-see because it exposes how skeptical we’ve become about the truth. As soon as you admit systems can be manipulated for selfish gain, there’s no denying that it isn’t happening right now in ways that make you the victim. Donald Trump epitomizes this phenomenon because he’s akin to God to his sycophants. They won’t even look at proof of his lies because they’ve decided that anything refuting his words has already been fabricated. So when DeHart earns the backing of other whistleblowers and the media, his story gets spun as one of a maligned hero to everyone that believes the government can’t be trusted. But what if he knew that? What if that was his plan?”

Where to Watch: Theaters and VOD (July 30)

9. The Works and Days (of Tayoko Shiojiri in the Shiotani Basin) (C.W. Winter and Anders Edström)

If one is looking to cool off this summer for the price of a single movie ticket, you don’t get much better value than the new eight-hour feature The Works and Days (of Tayoko Shiojiri in the Shiotani Basin), a Japanese-Swedish feature from C.W. Winter and Anders Edström. Shot over the course of 14 months, featuring 47 inhabitants in the mountains of Kyoto Prefecture, Japan, we’re curious what awaits in this sprawling Berlinale winner.

Where to Watch: Theaters (July 16)

Winner of a directing award at Sundance earlier this year, Sabaya was one of the best docs of the festival. Isaac Feldberg said in his review, “Tense and gripping, Hogir Hirori’s documentary Sabaya never positions itself as a thriller. There’s no need. Barring a few cards of scene-setting exposition, this vital dispatch embeds viewers with a rescue operation in the Middle East, and does so with a degree of first-person access that’s not just instantly bold: it’s nerve-janglingly scary.

Where to Watch: Theaters (July 30)

7. The Witches of the Orient (Julien Faraut)

After rethinking the parameters of the sports documentary with John McEnroe: In the Realm of Perfection, director Julien Faraut has returned with The Witches of the Orient, which premiered at Rotterdam earlier this year. Following a group of Osaka textile workers who formed a Japanese women’s volleyball team in the late 1950s, they became an Olympics-winning international sensation, feminist role models, the subject of a wildly popular comic book, and a still-influential anime. Rory O’Connor said in his Rotterdam review, “Around these fun little experimentations is a classic, satisfying sporting story and Faraut knows better than to mess too much with the formula (the plucky grafting underdogs, a team formed in an Osaka shipping company, did indeed come from nowhere to achieve unlikely feats). Yet there’s a diverting spikiness to Witches, and Faraut plays it in an atypically subdued key––even daring to wonder if all that sweat and effort was worth it.”

Where to Watch: Theaters (July 9) and Virtual Cinemas (July 16)

While he may not have wholly returned to his glory days, M. Night Shyamalan has seen a career rebound these past few years, and his next project is quite intriguing. Bringing together Gael García Bernal, Vicky Krieps, Rufus Sewell, Alex Wolff, and Eliza Scanlen, Old is set on a tropical beach whose inhabitants start aging rapidly. Marking one of the few studio titles with our attention, Shyamalan has shown a keen sense for visual language and pacing throughout his career and we can’t wait to see what he has in store here. – Jordan R.

Where to Watch: Theaters (July 23)

After getting a Disney-sized budget yet still retaining small-scale sensibility with Pete’s Dragon, David Lowery is once again increasing his scope with The Green Knight. An adaptation of epic Middle English poem Sir Gawain and the Green Knight, one in which Terrence Malick himself was once developing, the story follows a knight of King Arthur’s Round Table who goes on a quest to face the Godly mysterious warrior, the Green Knight. Starring Dev Patel, Alicia Vikander, Joel Edgerton, Sarita Choudhury, Sean Harris, Kate Dickie, Barry Keoghan, and Ralph Ineson, this R-rated epic marks Lowery’s longest film yet at 2 hours and 10 minutes. We can’t wait for every second of it.

Where to Watch: Theaters (July 30)

Now working at a pace that nearly matches another director a few spots down this list, Steven Soderbergh has returned only about half a year after his previous film with a new crime drama. No Sudden Move, set in 1954 Detroit, features a bevy of enticing faces with Don Cheadle, Benicio Del Toro, David Harbour, Ray Liotta, Jon Hamm, Amy Seimetz, Brendan Fraser, Kieran Culkin, Noah Jupe, Craig muMs Grant, Julia Fox, Frankie Shaw, and Bill Duke leading its cast. It had a strong response from the Tribeca premiere and is already widely accessible as you read this.

3. Summer of Soul (…Or, When The Revolution Could Not Be Televised) (Amir “Questlove” Thompson)

Questlove’s debut feature Summer of Soul was deservedly a triumph at Sundance, and the archival documentary (which also intersperses new interviews) now arrives during the most opportune season. Jake Kring-Schreifels said in his review, “The biggest block party of 1969 took place over six weeks in central Harlem. Clustered together into the rocky confines of Mt. Morris Park (now Marcus Garvey Park), 300,000 people spent their summer grooving to a free outdoor concert series that featured some of the world’s best gospel, blues, and R&B singers alive. At the intersection of the country’s racial and social revolution, the “Harlem Cultural Festival” offered a cathartic and electric musical experience for those in attendance, combining song and spoken word that inspired and unified. It was also largely forgotten. Which makes Summer of Soul (…Or, When The Revolution Could Not Be Televised) both a documentary and a rectification of history.”

Where to Watch: Theaters and Hulu (July 2)

2. The Woman Who Ran (Hong Sangsoo)

Following the premiere of The Woman Who Ran at Berlinale last year, Hong Sangsoo has since completed two new features that we hope will soon appear in the United States. In the meantime, his latest work arriving stateside is lovely in its serene simplicity. Rory O’Connor said in his review, “The Woman Who Ran opens on a lovely shot of hens. The camera then pulls back to show the garden of a middle-class apartment block where a woman named Youngsoon (Seo Younghwa) tells another, Youngji (Lee Eunmi), about her hangover. The lighting is natural; the performances and sentiment are, too. Hong Sang-soo’s cinema is one of repetition and anyone familiar will not take long to discern The Woman Who Ran as his own. He rinses; he washes; he repeats.”

Where to Watch: Theaters and Hulu (July 2)

The best documentary I saw on last year’s fall festival circuit, Her Socialist Smile provides a fascinating look at an oft-unheralded side of Helen Keller. “You may have known that Helen Keller was a comrade, a life-long socialist and member of the Industrial Workers of the World; in Her Socialist Smile, John Gianvito assembles Keller’s political addresses and writings into a portrait of a warrior for social justice and a passionate, insightful proselytizer of Marxist thought,” Mark Asch said in his review. “She instigated a Braille translation of Bakunin and advocated for a general strike during the first Red Scare. Now, in a time of national self-criticism, when seemingly no American monument is safe from revisionism, Helen Keller emerges from Her Socialist Smile to appear even more inspiring, relevant, and righteous than in the official narrative—appears, perhaps, the only truly based person they teach you about in elementary school.” 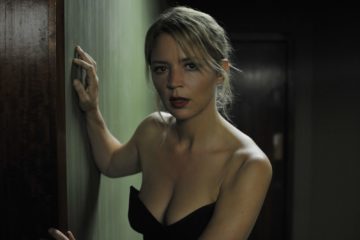