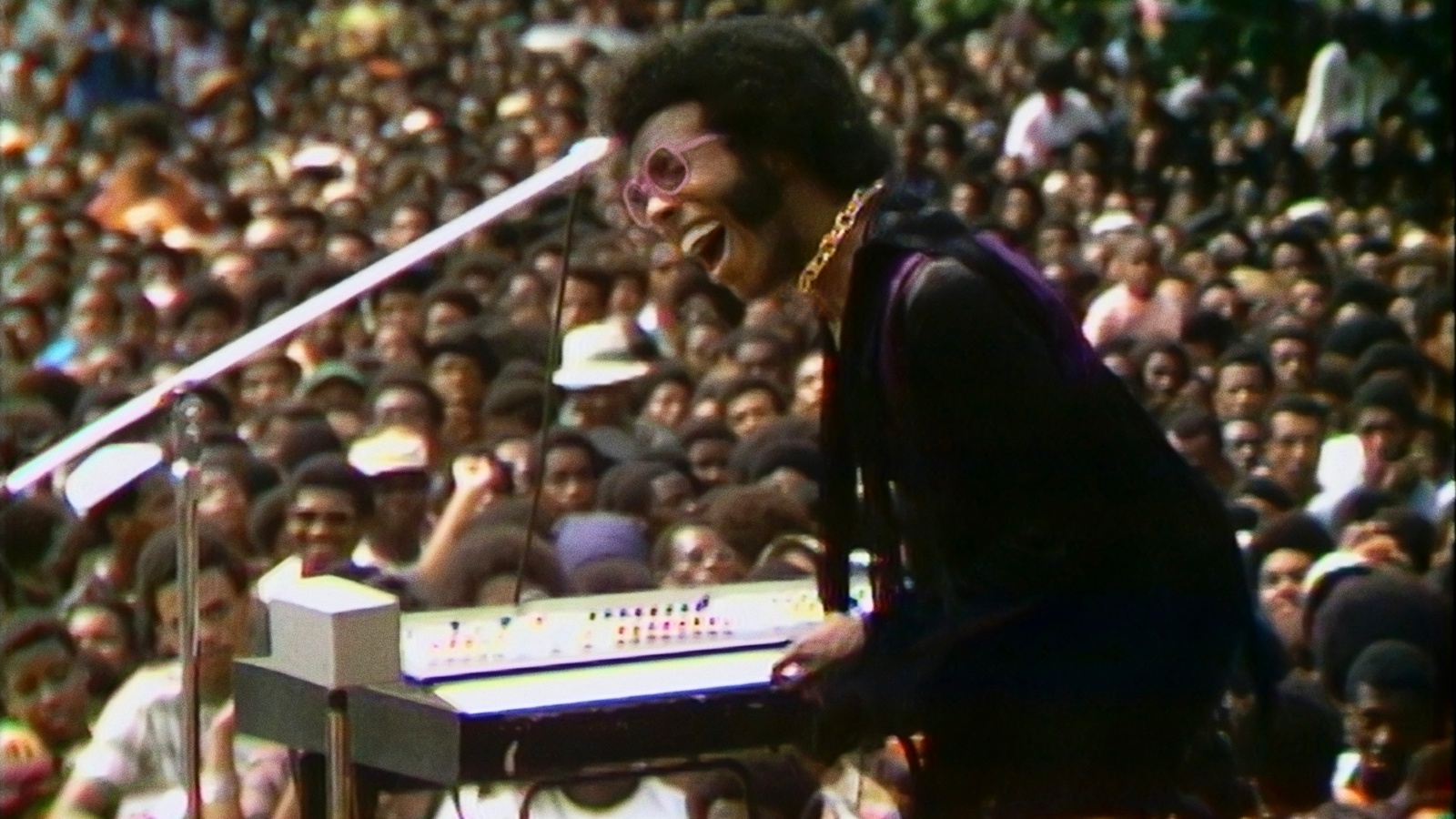 The biggest block party of 1969 took place over six weeks in central Harlem. Clustered together into the rocky confines of Mt. Morris Park (now Marcus Garvey Park), 300,000 people spent their summer grooving to a free outdoor concert series that featured some of the world’s best gospel, blues, and R&B singers alive. At the intersection of the country’s racial and social revolution, the “Harlem Cultural Festival” offered a cathartic and electric musical experience for those in attendance, combining song and spoken word that inspired and unified. It was also largely forgotten.

Which makes Summer of Soul (…Or, When The Revolution Could Not Be Televised) both a documentary and a rectification of history. Making his directorial debut, Amir “Questlove” Thompson, best known as the drummer and joint-frontman of The Roots, has brought this voided explosion of music back to colorful life. For 50 years, the opening title cards state, the footage of this massive festival—just 10 blocks north of Central Park, taking place at the same time as Woodstock—sat untouched in a basement. Upon its discovery, Thompson culled through more than 45 hours of footage from four camera angles to create a revelatory tribute to a distant time that crackles with an energy and spirit that feels like it happened yesterday.

In many ways, it’s a miracle. Interspersed with crucial historical context, Summer of Soul provides a showcase of all-star talent, archived video in pristine condition featuring performances from Stevie Wonder, B.B. King, Gladys Knight and the Pips, Nina Simone, Sly and the Family Stone, and numerous other legendary acts of the time. Thompson speaks with the festival’s performers, leaders, and attendees, who marvel and turn emotional at the footage. This was more than just music. For the sea of smiling Black faces extending blocks in every direction, this was a cathartic release of grief and pain and oppression.

Lesser documentaries might have stuck strictly to the music, but Thompson treats each performance as an opportunity to uncover anecdotes and biographies about bands and Harlem and the culture around it. This is filmmaking as curation. The festival was possible because of Tony Lawrence, a club promoter and lounge singer, who petitioned the NYC Parks Department to allow him to produce and emcee the event. He found sponsorship from Maxwell House coffee, used Black Panthers for extra security, and got liberal-minded mayor John Lindsay to make an appearance. Artists from 5th Dimension speak about how the festival allowed them to embrace their vocal identity and let “our people know what we’re about.” Meanwhile, Mongo Santamaria and Ray Baretto helped represent the Spanish Harlem population, diversifying these day-long jam sessions and turning them into melting pot spirituals.

Thompson nestles the most riveting moment about halfway through the documentary. In the wake of Martin Luther King Jr.’s assasination, the latest in a decade of high-profile murders, and in the midst of a Black pride transformation, Reverend Jesse Jackson took the stage for prayer and healing. Having witnessed King being shot, he reflects on the preacher’s untimely death before introducing his favorite gospel hymn, “Take My Hand, Precious Lord.” Mavis Staples and Mahalia Jackson share the vocals, and each takes turns belting out the chorus. It’s life-giving, transcendent stuff. You feel their anger, their sadness, their soul. It’s the kind of hair-raising performance that elicits a collective gasp, and it almost feels cruel that this documentary, which premiered virtually during Sundance’s opening night, won’t get a sold-out audience to hold its breath.

Much like the concerts, Thompson keeps the pace moving. Each scene contributes to the kaleidoscopic nature of the music—ranging from funk to Afro-Latin to jazz to Motown—bursting from the stage. The music remains in the foreground (Thompson’s edits have an inspired and intuitive rhythm) so that when bulletins about the United States landing a man on the moon cross the screen, it feels like a footnote. Those in attendance share a collective shrug about the monumental achievement. They want the government’s money spent on their struggling communities and to bask in the life happening within it. “Harlem was heaven,” as one resident points out. There was no place its people would rather be, and no other news that could distract from their musical barbecue.

Thompson said he began this project in a state of disbelief. The concert’s videographers and producers attempted to sell the concert series to buyers under the name “Black Woodstock,” but found no interest. It’s hard to fathom. Musa Jackson, who grew up in Harlem, was only a kid when he attended the festival. Upon seeing the footage, he tears up in front of the camera. He’s finally witnessed evidence to support his vague memory. After a summer of racial and moral reckoning, which reintroduced many to forgotten parts of traumatic Black history, Thompson has produced a more joyful unveiling. That’s what makes Summer of Soul feel bigger than a documentary. It’s better defined as an archeological excavation, a confirmation of distant recollection, returned and restored. You have to wonder how many other dusty canisters like it are still lying around.

Summer of Soul (…Or, When The Revolution Could Not Be Televised) premiered at Sundance Film Festival.