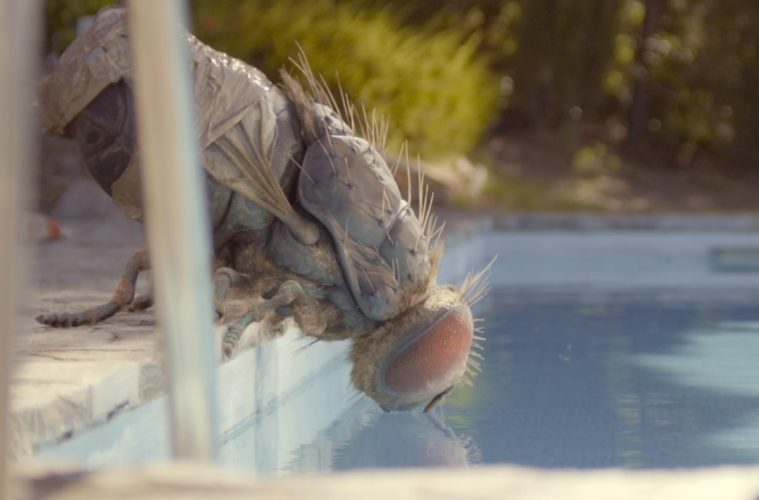 Like the giant fly in Mandibules, director Quentin Dupieux has been buzzing and provoking us for roughly the past decade, trying to build a reputation as a new French surrealist auteur. Many were won over by last year’s Deerskin, but his latest bizarre creation truly confirms his talent.

His two best-known features, Rubber and the aforementioned Deerskin, can be summed up in a simple high-concept phrase: respectively, the “killer tire film” and the “killer jacket film.” In surrealist logic, the evolutionary chain clearly goes from tire to scream (Reality) to jacket and now to fly. Rather than something out of Cronenberg’s beloved remake, this fly is a charming, almost Spielbergian creature––far less dangerous than its human cast members. The film is notable for finding different sources of humor, puerile as they may be, than his usual theatrical violence.

That humor is more bracingly un-PC that what’s usually tolerated in the anglophone film world. Our two idiot-protagonists, stupide et plus stupide, are Manu (Grégoire Ludig) and Jean-Gab (David Marsais). Manu looks and dresses like the failson of Jeff Bridges’ The Dude and a young Gérard Depardieu. Jean-Gab is marginally more refined, with his Danny McBride perm and a Hawaiian shirt. The plot is essentially following two idiots who find and attempt to domesticate a giant fly. Either that appeals to you in its moronic way or it doesn’t. This time, I was charmed.

The opening act is pro-forma stoner-bro comedy. Then, with a hilarious Adèle Exarchopoulos in tow, this gallic-Guy Ritchie film stumbles into a mellow, sunlit world not removed from François Ozon and Luca Guadagnino. Over the course of the fairly brief runtime, two male friends attempt a short criminal job and their scheme takes a digression when Manu is mistaken for a former high school lover by an attractive young woman (India Hair). They are then waylaid for half the plot at her holiday villa, all the while attempting to conceal their gigantic insect friend. A peek at Mandibules’ sense of humor: on inspecting their hosts’ plush kitchen, Manu exclaims, “Ah, rich girl fridge!”

Perhaps we’re comedy-starved in today’s cinematic landscape, but Dupieux’s rollicking adventure generates rare laugh-out-loud moments and even a few applause-worthy bits. It’s a shame Mandibules won’t attempt to make its reputation in the traditional way, in a film festival run at cult or midnight slots. Ever cine-literate, Dupieux’s technique and film references are more eclectic than most American comedy––one sequence is akin to Peckinpah and Melville, and cineastes charmed by Bruno Dumont’s black comedies Li’l Quinquin and Slack Bay will also be satiated. It’s Dupieux’s most polished, expensive, and well-made film, and, not coincidentally, also his best.