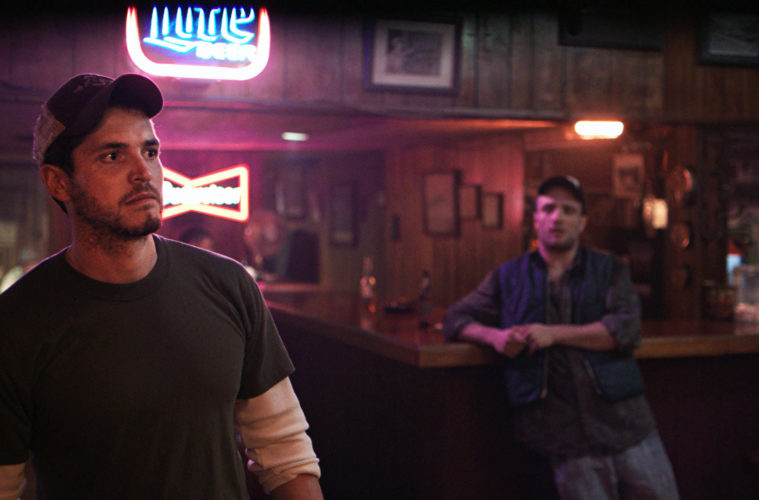 Has there been a great feature made about the opioid crisis in America? Director Braden King is determined to answer the question “yes” with The Evening Hour, written by Elizabeth Palmore and based on the novel by Carter Sickels. And while he bites off a bit more than he can chew here, there’s a good deal that resonates.

First Reformed‘s Philip Ettinger stars as Cole, a nursing home aide who moonlights as a drug dealer. Only, he seems to have something of a moral code about the meds he’s slinging. Sure, he’s keeping a lot of townspeople addicted but he’s doing it responsibly, legitimately supporting some who can’t afford pills they need and keeping others safe from the much-worse Everett (Marc Menchaca). He carries on a half-assed relationship with Charlotte (Stacy Martin) and a general sense of calm. This all crumbles once Terry Rose (Cosmo Jarvis), a friend from the past, returns to town. Cole’s old pal has a cock-eyed plan to take over the drug trade in town, much to the chagrin of Everett.

Things get further complicated by the reappearance of Cole’s wayward mother (Lili Taylor, legend) and a local bartender (Kerry Bishé) with a tragic past all her own. Let’s take this quick moment to acknowledge that Bishé (who is not in this film nearly enough) commands the frame at all times, a movie star waiting to shine.

This is a drama full of effective performances, though Michael Trotter–who plays Reese, Cole’s sometimes supplier–is the standout. Sporting memorable tattoos and a ridiculous haircut, Reese is the kind of supporting character an actor dreams to play. Frankly speaking, he steals scenes from Ettinger wholesale. One wishes every detail was as fully-formed as Reese is in The Evening Hour. As Terry’s plan falls apart, all of the plot machinations collide a bit. Jarvis has a lot on his shoulders playing Terry, a conflicted foil, and does not fully succeed.

Cinematographer Declan Quinn keeps things beautiful throughout, a welcome constant no matter how cluttered the narrative space gets. And while The Evening Hour runs long at nearly two hours, King observes the complexities of an opioid-addicted environment better than most. Through Cole do we understand that while the drugs are harmful for this community, they’ve also become necessary to the economy. As our hero realizes he must make things right, he is also aware that his actions will create a dangerous vacuum for many of the people he legitimately cares about. There are no easy answers, and those making The Evening Hour do not presume to have them. That’s an honesty hard to come by.