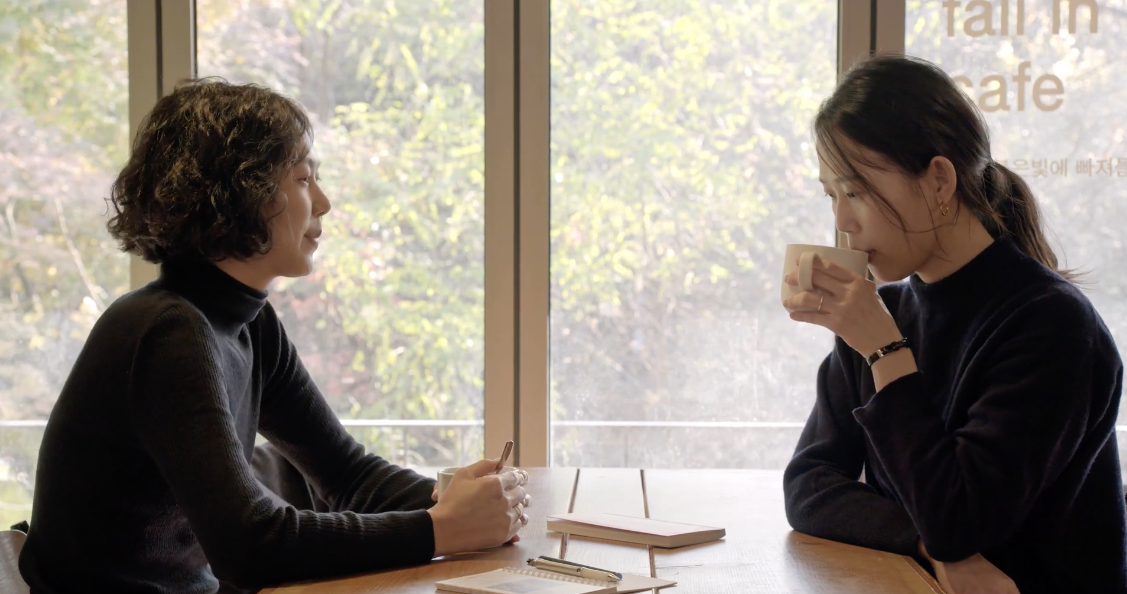 The Woman Who Ran opens on a lovely shot of hens. The camera then pulls back to show the garden of a middle-class apartment block where a woman named Youngsoon (Seo Younghwa) tells another, Youngji (Lee Eunmi), about her hangover. The lighting is natural; the performances and sentiment are, too. Hong Sang-soo’s cinema is one of repetition and anyone familiar will not take long to discern The Woman Who Ran as his own. He rinses; he washes; he repeats.

Some things, however, do change. Since the premiere of Right Now, Wrong Then in 2015, Hong has gradually moved from the melancholic male protagonists that defined his early work, and Woman feels like another natural exercise in that process. His artistic partnering with Kim Min-hee has been key to this–a no-nonsense and wonderfully nuanced actress who took her first Hong role in Right Now, then appeared in all but one of the seven films he’s made since.

Kim takes the lead again here as Gamhee, a woman who claims not to have spent a day without seeing her husband since they married five years previously (naturally, he never appears). Hong’s short and bittersweet movie follows Gamhee as she meets three friends: first Youngsoon, who we met in the garden, for dinner; then Suyoung (Song Seonmi), who has recently moved into a trendy apartment block; and lastly Woojin (Kim Saebyuk), an old flame who she serendipitously encounters at a cinema.

Hong’s style continues to disarm, not least his eye for deadpan observational humor. One early scene sees Youngji dryly deal with a neighbor who’s taken issue with her leaving food out for local stray cats. The man’s frustration is deflected until he finally gives in and walks away, revealing the cat who’d been watching on throughout–the director brilliantly treats the feline to its own signature Hong zoom. (You kind of have to be there.)

Hong’s film takes pleasure in these moments between human and beast: first the hens and cats; later, in a typically boozy dinner scene, as Gamhee stuffs her mouth with meat while remarking on how she’s always wanted to be vegetarian. It also finds the director at his most self-referential–and while that nudging awareness can occasionally play like a trite in-joke, it seldom fails to endear. (Remarking on the work of a writer they know–one of the only men to appear onscreen–Gamhee argues that “he just repeats himself, how can that be sincere?”)

This glances at some contemporary anxieties–the screen-time he affords to Youngsoon’s elaborate self-locking doors and Suyoung’s admission of having to be an artist to get her apartment, both speak to some concern for closed communities–but Woman Who Ran looks and feels like a pleasant farce in comparison to much of Hong’s recent output (On the Beach at Night Alone, Grass, The Day After). Even by design it is lighter on its feet–Hong’s score is not short on levity, nor is the clean and sunny cinematography of Kim Su-min–but this is nothing if not agreeable.

The film’s heart lies in the conversations between these women as they reminisce on more frivolous times and open old wounds. The ending appears at first to wink to the close of Right Now, Wrong Then–with Kim relaxing back into a red cinema seat–but then even more explicitly to On the Beach at Night Alone and the quietly cathartic moment when Kim lay on the sand as waves calmly crashed before her. When Woojin asks Gamhee what she thought of the film she responds, “It was peaceful.” Too true.

The Woman Who Ran premiered at the Berlin International Film Festival.