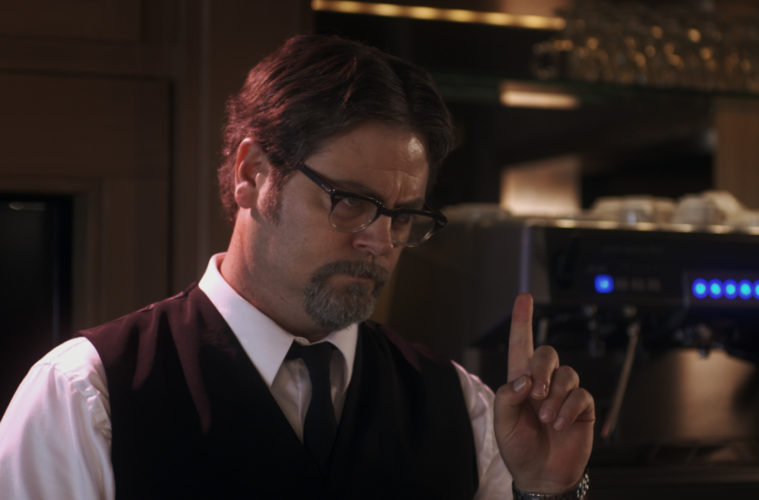 Nick Offerman & Alison Brie Toke Up In ‘Somebody Up There Likes Me’ Promo; Picked Up For March 2013 Release Movie studios, take note. Here’s how you announce a film is being made available to an audience. With today’s announcement that Tribeca Films have picked up Bob Byington’s comedy Somebody Up There Likes Me for a March 2013 video-on-demand and theatrical run, some of the stars of the film (and other acquaintances) got together to celebrate, or something to that effect.

In the below video one can find star Nick Offerman (Parks & Recs‘ Ron Swanson) with wife Megan Mullally and Community‘s Alison Brie (the latter is not involved in the film) partaking in some celebratory festivities and trying to remember details of said film. It’s hilarious and best of all, a bit different from most stale announcements. We quite liked the film, also starring Keith Poulson and Jess Weixler, at SXSW saying, “Byington is fully in control and has crafted the most detached comedy of the year thus far. In some ways he is able to achieve a spot-on truth.” Check out our full review here and teaser and press release below.

New York, NY – July 25, 2012 – Tribeca Film today announced it has acquired all North American rights to indie director Bob Byington’s deadpan comedy Somebody Up There Likes Me, starring Keith Poulson, Nick Offerman, and Jess Weixler. Produced by Hans Graffunder (Knight of Cups, To the Wonder) and Nick Offerman (“Parks and Recreation”), the film turned heads earlier this year when it world premiered at South by Southwest Film Festival in Austin – Byington’s home-base.

Somebody Up There Likes Me marks a new, more scripted approach to filmmaking for Byington, whose signature freeform style defined films such as RSO (Registered Sex Offender) (2008) and Harmony and Me (2009). The endearing dry humor that made him a household name from Austin to Brooklyn, however, has not been lost. Indiewire calls it “a surreal comedy about the cycle of life” and “consistently silly and poignant at once.”

Tribeca Film plans a theatrical Spring 2013 release day and date with on-demand platforms where it will be available in 40+ million homes through a variety of video-on-demand offerings, as well as iTunes, Amazon Watch Instantly, VUDU, Xbox and Samsung Media Hub. A strong U.S. and Canada Festival run is set for pre-release.

Byington creates an offbeat energy by brilliantly pairing established actors and non-actors in this comedic fable about a man watching his life fly by. Max (Keith Poulson), along with his best friend Sal (Nick Offerman, “Parks & Recreation”) and the woman they both adore, Lyla (Jess Weixler, Teeth), stumble through thirty-five years of seemingly mandatory but unfulfilling entanglements. Featuring an original score from Vampire Weekend’s Chris Baio, stunning animated sequences from Bob Sabiston (A Scanner Darkly), produced by Offerman and directed by cult auteur Bob Byington (Harmony and Me), the experience of life sneaking up on you while time appears to stand still has never been more surreal and charmingly entertaining.

“Somebody Up There Likes Me displays all the quirkiness, personality, and distinction that defines independent filmmaking,” said Geoffrey Gilmore, Chief Creative Officer of Tribeca Enterprises. “Infused with a biting, dry sense of humor and filled with wonderful performances from a talented cast, Bob Byington’s latest film reaffirms his reputation for being one of the most wonderfully idiosyncratic directors at work today. Although the destination is familiar, the path that Byington charts is unexpected, strange and utterly unique.”
“Very gratified that Tribeca responded to the film, and that Mr. Gilmore, who is a cinema icon, would put energy into releasing the film. Pleased to have made a film with a great team, and to be releasing the film with a team that is on par,” said director Bob Byington.

“Little films like ours are made exponentially more buoyant by the tender ministrations of a company like Tribeca. Finding ourselves in their tasteful clutches makes me as happy as a clam at high water,” said actor/producer Nick Offerman.

What do you think of the promo? Looking forward to the film?