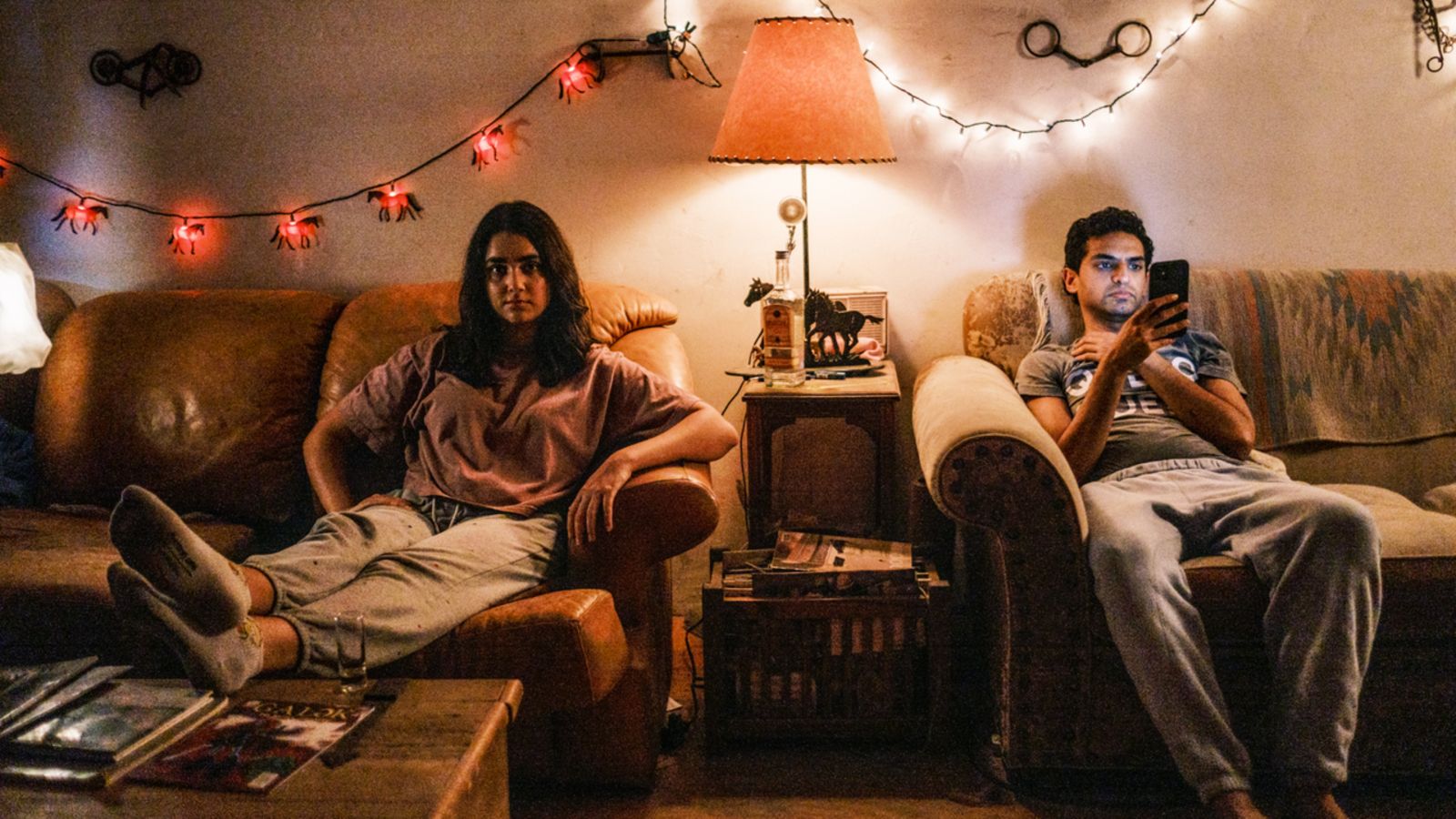 As cities across the world were forced to issue mandatory lockdowns at the start of last year’s COVID-19 pandemic, some Internet commentators light-heartedly pointed out that quarantine felt like a narrative trope right from a rom-com. So it’s not surprising to see this premise come to life in the heartfelt (if sometimes clunky) 7 Days, a funny and emotionally stirring debut from director and writer Roshan Sethi. It’s a contrivance that could have fallen into traps of predictability very quickly, but Sethi keeps the concept fresh by cleverly infusing it with a twist—a pragmatic set-up for an arranged marriage that quickly unravels in a world similarly spiraling out of control.

The film opens with a warm series of videos featuring real, long-time Desi couples who have been asked to talk about their arranged marriages. Each relay how they met, setting the tone for our story between Ravi (Karan Soni) and Rita (Geraldine Viswanathan), who are on their first date in a park, scheduled by their mothers via dating app. The two are wearing masks, immediately dropping viewers into a world that’s just been changed by COVID-19. While they briefly discuss the virus during their date, repercussions become real for Rita and Ravi very shortly. Returning to Rita’s apartment, Ravi discovers that his rental car, which he was counting on to drive himself home, has been cancelled due to the pandemic. A shelter-in-place order has also been announced. There’s no choice for Ravi but to stay over with someone he’s only just met.

Of course, being forced together in such tight quarters so quickly reveals some unflattering truths about our two leads. Rita, who had presented herself as a polite, teetotaling, vegetarian Indian girl on the date, is actually a bit of a vulgar slob, aimless in life and entangled in an unsatisfying affair. And Ravi, straight-laced and uptight, is distressed that she doesn’t live her life according to her mother’s rules and expectations, as he does. (And that she doesn’t watch any Bollywood films!) He wants too much control over his life, she wants none at all—personalities so opposite that they clash almost immediately. But conflict, after all, is where characters do their best growing. 7 Days is most joyous and triumphant when we get to watch Rita and Ravi open up to each other and, over the course of the movie, slowly change each other for the better.

The confines of quarantines are not without its downsides, and the plot has very little space to go, literally and figuratively. While there are beautiful and affecting scenes between the two leads, such as when Ravi encourages Rita to cook her first meal, or when Rita gets Ravi drunk and emboldens him to perform an impromptu stand-up routine, they can feel disconnected from each other. Because the plot is driven forward by little other than the passing of time, we as the audience sometimes feel stuck in Rita’s apartment—appropriate given the film’s circumstances, but in ways that are (I think) unintentional. Part of this is caused by the slightly unequal weight given to its leads. Though both are complex and multi-faceted characters, 7 Days gives Ravi a bit more to work with: more screen time to explore his feelings, a little bit more emotional growth, and because of this, he’s the more interesting of the two to watch. But plot devices strand Ravi to do much of this work alone, and without a scene partner to bounce off, the movie’s back half starts to lose steam.

With COVID-19 operating as the movie’s central plot driver, there is no avoiding mention of the pandemic in 7 Days. Without giving away too much, I want to applaud the movie for incorporating the seriousness of the disease, its resulting physical and psychic toll on those affected. Some of its most tear-jerking, poignant scenes examine the impact COVID-19 has had on its patients and their loved ones. At the same time, this level of gravitas does feel somewhat out-of-place in a light-hearted comedy, and created a tonal dissonance that I’m still not sure how to feel about.

Ultimately what stands out about 7 Days is its sharply scripted humor and leads’ incredible chemistry. Watching Rita and Ravi bond over the course of a week and push each other out of their comfort zones was such a rewarding experience that it eclipsed all qualms. Soni and Viswanathan, who were also stand-outs in TBS’s Miracle Workers, are both so effortlessly funny and charming as romantic co-leads, and Sethi understood exactly how to utilize their magnetic screen presence. It also shouldn’t be ignored that arranged marriage is often vilified in Western culture, so it’s refreshing to see it celebrated with such care and aplomb. For any rom-com aficionado, 7 Days will be an enjoyable cinematic treat.