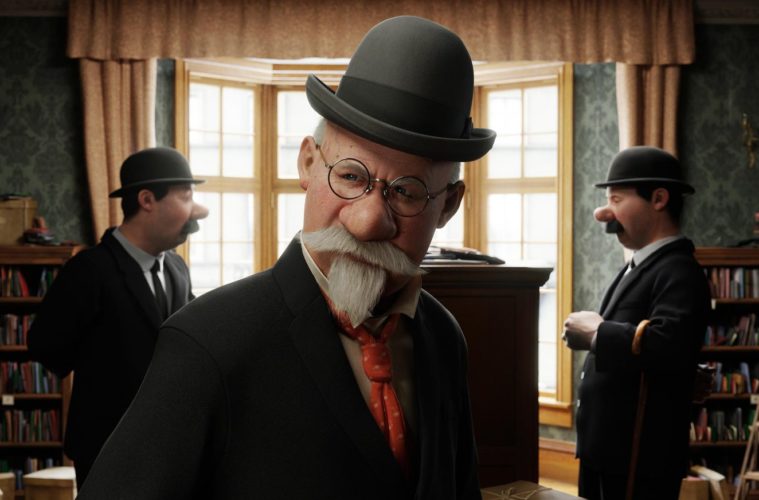 Hi-Res Images From Spielberg’s ‘The Adventures of Tintin’

If anyone can turn a franchise largely unknown outside of Europe into a Stateside crowd-pleaser, it would Steven Spielberg. /Film brings us some beautiful high-resolution frames from the Peter Jackson-Spielberg motion-capture 3-D collaboration, The Adventures of Tintin: Secret of the Unicorn. We’ve already seen a few pics, and it looks like Spielberg and company have managed to largely avoid that freaky Uncanny Valley effect. (And I know some of you out there were kind of turned on by Zoe Saldana‘s Neytiri in Avatar… but, uh, no comment other than – go to a bar and talk to a girl.)

So here we go – Tintin (Jamie Bell) and Captain Haddock (Andy Serkis, thank God), stuck in a desert for reasons that will be probably be made clear once we have an actual trailer. (Although don’t hold your breath – on Saving Private Ryan, the DreamWorks marketing people had to beg Spielberg for more than a few frames for the trailer… which they then played in slow motion just to have something other than a line of dialogue and titles.)

And now here’s Tintin and Barnaby (Joe Starr) in an encounter straight out of something like The Maltese Falcon (nice lighting here):

And finally, the twins Thompson and Thompson (Simon Pegg and Nick Frost, and again a hallelujah), with the insidious-seeming Silk (Toby Jones) front and center.

Now, given that all of these shots are lacking any kind of context whatsoever and the plot is hazy, I have to say this looks pretty nice. I’m actually a fan of Robert Zemeckis’s pioneering The Polar Express and I also think Beowulf was very underrated. And these frame captures look nicer than either of those motion-capture flicks, so I’m willing to suspend any kind of judgment… until we see a trailer.

What do you think of these shots? Have you Googled Tintin yet?