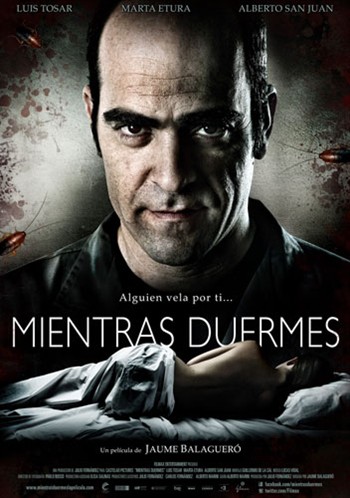 You would think Catalan director Jaume Belaguero, best known as co-creator of the [REC] franchise, would have hands full these days. As solo-director of the upcoming, hotly anticipated [REC]4: Apocalypse, he certainly has a lot of work ahead of him. But with that film slated to hit theaters in 2012, it won’t be the next project audiences see from him. Since the trailer is in Spanish, a brief synopsis is in order.

Cesar (Luis Tosar) works as a doorman in a Barcelona apartment building. Happiness eludes him and he feels the need to reaffirm his reasons for living on a daily basis. He goes about his day to day work mainly unnoticed by the residents of the building, but he pays close attention to them. He knows all the intimate details of their lives, everything about them, especially one of them. Clara is a happy-go-lucky young woman, who always looks on the positive side of things. Her cheery attitude to life makes Cesar’ skin crawl. He won’t be happy until he has wiped that smile of her face once and for all, because Cesar feeds off other people’s pain. He delights in the unhappiness and anguish of others and he loves nothing more than to plant the seed of misery and watch it grow. In Clara he has found the perfect target, and he will go to extreme lengths to make her life miserable. But Cesar is starting to get a bit too cocky, and soon his carefully thought out plans will start to unravel… Luckily for him, he has one last ace up his sleeve.

Even if you don’t speak Spanish, this is a fantastic trailer for a promising thriller. Tosar looks downright malevolent when his character finally drops the cheery facade and gets to the dirty work, and with a quick shot of the doorman washing blood off his rubber gloves, the trailer promises things will get dirty.

Belaguero seems to be drawn to horror/thrillers set in apartment buildings. What do you think makes that setting so ripe for genre pictures?