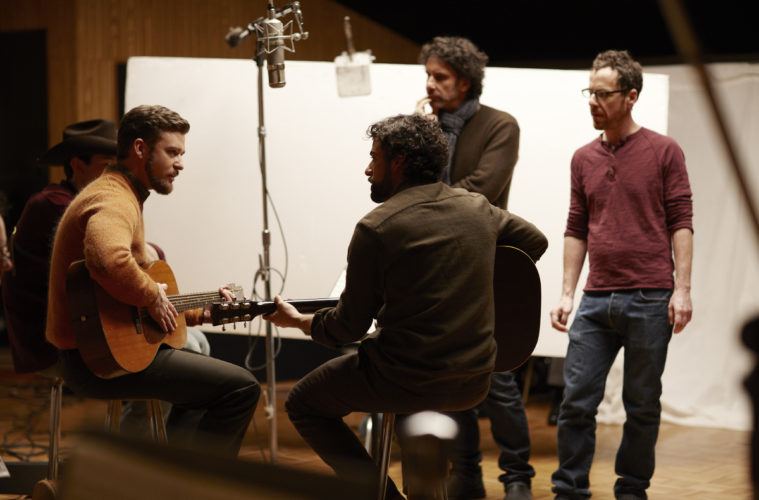 With less than a year to go until we see Coens‘ next feature, the 1950’s-set Hail, Caesar!, we’re starting to get more details about the project, which kicked off production last November. Featuring the top-notch cast of Josh Brolin, George Clooney, Channing Tatum, Tilda Swinton, Ralph Fiennes, Jonah Hill, Frances McDormand, Christopher Lambert, Scarlett Johansson, and many more, we previously knew it followed a single day in the life of a studio fixer who is presented with plenty of problems to fix.

Speaking to Marc Maron, co-star Alex Karpovsky recently revealed, it’s a “really funny script, kinda more wacky and zany than their last movie, more Hudsucker Proxy.” We’ve now got more information as composer Carter Burwell and sound mixer Skip Lievsay sat down for a talk at the 2015 Tribeca Film Festival this week. “It’s a musical comedy that takes place on a Hollywood backlot, so you pass through all these pictures that are in production there,” Burwell says (via THR).

With the variety of films within films being shot at the studio, it’ll feature a number of musical sequences, one being a “a tap-dance water number.” Speaking about the tone of the film, Burwell says, “I wouldn’t actually call it a ‘musical comedy’ — there are movies within the movie, and those movies might have comedic music, but the movie we’re making is actually not comical. I haven’t written the music yet, but I’m quite certain it’s actually going to be quite the opposite. It’s going to be rather serious, and it’s about faith. It’s not about the music.”

So while Karpovsky’s comments don’t directly correlate with those from Burwell, we’d chalk it up to the various different tones on display in the vast number of genres we might see at the backlot. Regardless, if it’s like most films from the Coens, they are experts at blending wackier comedic elements with darker undertones, and we certainly can’t wait to see the results.

What do you think of the new details?