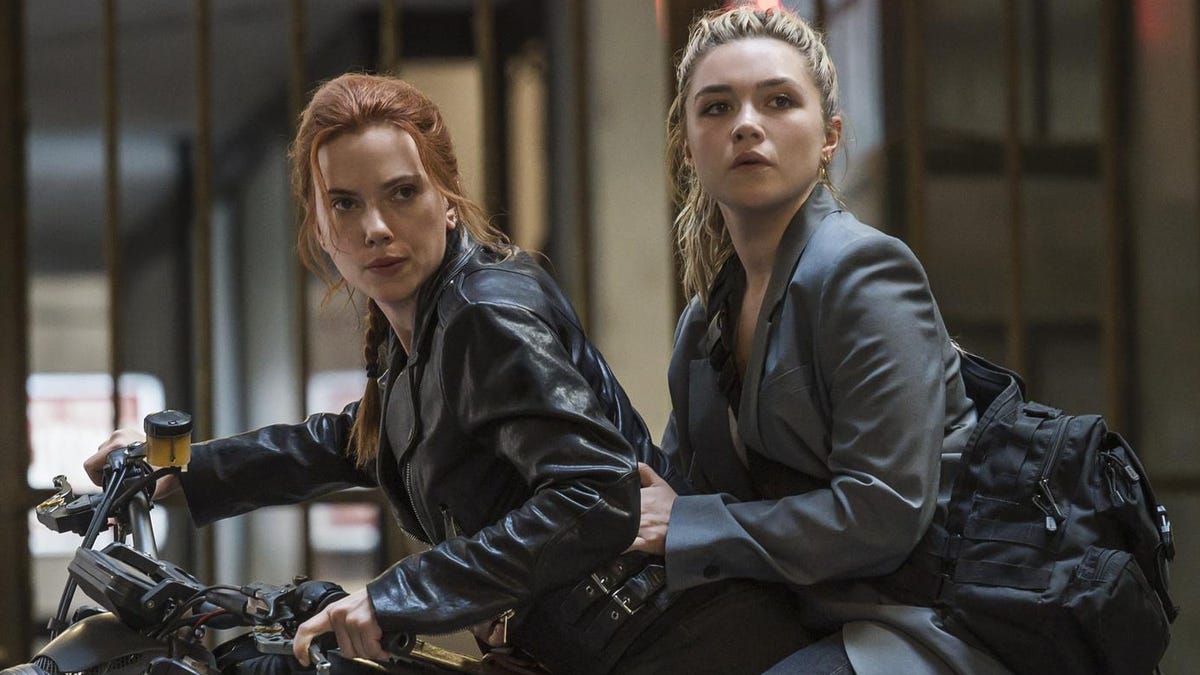 It’s been over four years, and what feels like a lifetime of online debate, since the release of Wonder Woman, a female-led superhero film that was praised as a victory for representation. This year, Black Widow—the standalone film for the maligned female MCU character—is released with much less fanfare; it seems like it’s been delayed past relevancy.

The film picks up sometime after the events of Captain America: Civil War, with the Avengers split into two factions and our Natasha Romanov (Scarlett Johansson), the Russian super-spy-turned-American-Avenger, on the lam. She’s drawn back into her past by a mysterious missive from her younger sister, Yelena (Florence Pugh), from whom she was separated in childhood. Both girls were reared under the tutelage of General Dreykov (Ray Winstone), a megalomaniac who uses chemical and psychological means to brainwash young girls into becoming ruthless agents (his “widows”). Reuniting with the only family they’ve known, Johansson leads a group of spies who get sent deep undercover in Ohio circa 1996 to shut down Dreykov.

As a standalone MCU film, Black Widow benefits from some narrative coherence, unlike Avengers entries that are stuffed to the brim with characters and plot. In its first two acts, the Cate Shortland-directed tentpole is fashioning itself as a high-tech, Soviet flavored espionage film. And there are flashes of the nimble fight choreography and travelogue quality of Bourne and Bond films (without the immersive disorientation of the former or the silly glamor of the latter). But it can’t resist an overdone and incomprehensible third act that sees our heroines tumbling from a floating monstrosity heading towards the ground in a greyish sludge of shattered glass and flame. And this isn’t really a spoiler—so many Marvel films end this exact way. The infamous “Red Room,” where the widow’s spirits are crushed and their fighting skills perfected—and which is referred to countless times throughout the film—is only seen briefly in shots intercut with the main action. The climax is bombastic but numbing; we have so little sense of scale and place that it’s hard to feel anything when all comes crashing down.

The film enlists more prestigious talent into the Marvel machine, including Julia Louis-Dreyfus, Rachel Weisz, and Florence Pugh. The lattermost is a scene-stealer, bringing some genuine brio to the weak jokes, and next to her, Johansson seems a little tired. Maybe we are all starting to feel Marvel fatigue, despite (or because of) a list of upcoming releases as long as my arm. It seems unlikely there will be a sequel to Black Widow since, in the larger world of the MCU, Black Widow is unquestionably dead. It’s an anticlimactic, unintentionally melancholy swan song for a character who was a franchise workhorse, doing much—lacking a better term—emotional labor for the more famous Iron Man and Captain America.

There is surprisingly little girl-power rhetoric here, as if the film itself was weary of years of female superheroes discourse. There is one weak clap-back when their fake father Alexei (David Harbour) asks his irritated “daughters” if it’s their time of the month, to which Yelena responds that the widows can’t get their periods because they are forcefully given hysterectomies. The widows are aptly named; they are stripped of the capability to reproduce, menstruate, and, from intense psychological conditioning, love. They are prematurely old and left to redefine what a woman’s life means without these rites of passage. Like many action heroines, notably the Bride in the Kill Bill films, they are stripped of key features of womanhood to make them better fighters, i.e. more like men. Unlike Wonder Woman, who was raised with a family, nation, and purpose, the widows are orphans—their identities fragmented, their only family ersatz. It’s a provocative, poignant plotline that gets lost in the muck.