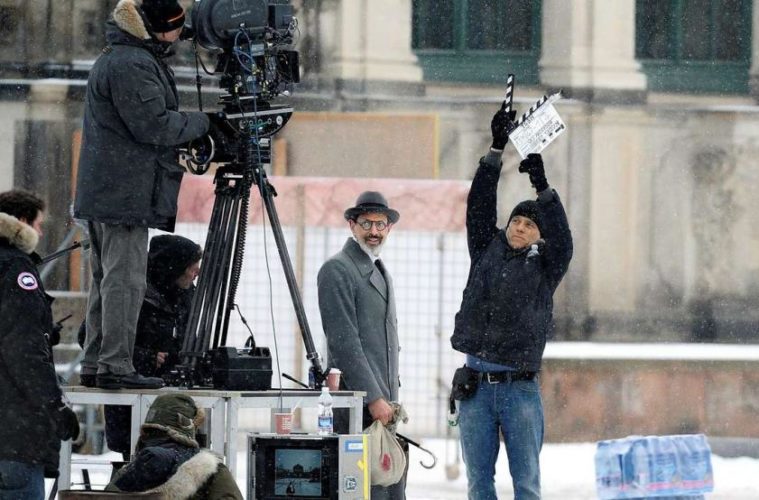 While shooting has been going on in and around Berlin, Germany since 2013 kicked off, we’re in the last month of production on Wes Anderson‘s The Grand Budapest Hotel and the first looks at our cast have finally arrived. For his Moonrise Kingdom follow-up, the director has once again assembled a top-notch group of actors, including Bill Murray, Jeff Goldblum, Saoirse Ronan, Mathieu Amalric, Ralph Fiennes, Jude Law, Adrien Brody, Edward Norton, Jason Schwartzman, Bob Balaban, Willem Dafoe, Tilda Swinton, Owen Wilson, F. Murray Abraham, and Harvey Keitel.

A few of them have been revealed today, as above and below we can see a bearded Goldblum, as well as a suited up Wilson, Fiennes sporting a purple jacket, Brody with his gun drawn (and is that Norton directly below us, in the mix with Brody and Wilson?). We’re also given a peek at the elaborate sets Anderson is playing with this time around, including inside the titular hotel. I’ve also included a video featuring Dafoe on a motorcycle in some sort of action scene, as well as other areas of the production. Inspired by the work of Billy Wilder and Ernst Lubitsch, one can see more details on the story here, and check out the photos and video below for what’s surely one of our most-anticipated films of 2014. The Grand Budapest Hotel will arrive in 2014.