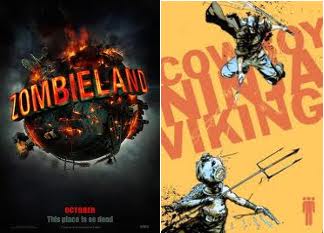 Based on the graphic novel by AJ Lieberman and Riley Rossmo, Cowboy Ninja Viking is a Cowboys & Aliens–style mash-up about an assassin (the titular cowboy/ninja/viking) called on by his creator to take down his colleagues, called “Triplets,” all of them the product of multiple personality tampering. Judging from the premise, this is right up Reese & Wernick‘s proverbial alley.

After several false starts in TV, Rheese and Wernick rocketed up the A-list with the horror-comedy Zombieland. They have apparently turned in their script for Deadpool, based on the Marvel vigilante/superhero last seen portrayed by Ryan Reynolds in X-Men Origins: Wolverine. They are also working on a sequel to G.I. Joe and Rhett Reese recently released his novel, Anxiety, which you can preview here.

Does Cowboy Ninja Viking sound as much fun as Zombieland?