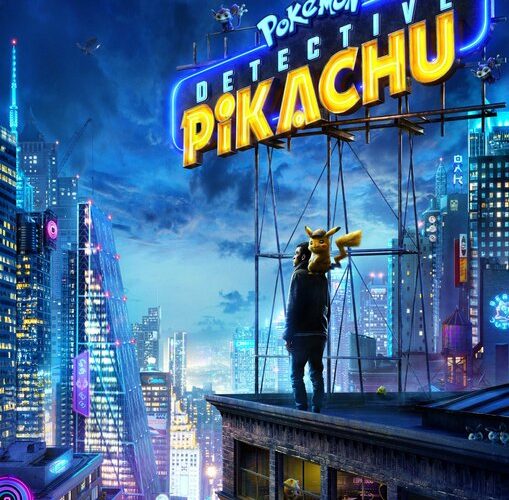 It’s almost shocking that nobody made a live-action Pokémon movie considering the card game’s heyday was back in the 1990s while the anime and video games still ruled kids’ televisions. That’s not to say the property ever disappeared. Nintendo couldn’t have turned “Pokémon GO” into an international smartphone phenomenon without strong brand recognition spanning multiple generations. But what was there to lean on narratively? The creatures themselves can’t say anything but their names and the human characters are kids trying to catch them in the wild to then battle a la the cards. While you could get away with something as simple as that, there wouldn’t be the type of lasting power necessary for box office glory. For that you would need a hook—something Detective Pikachu provides.

The game’s first mini iteration arrived in Japan circa 2016 with the full product hitting shelves last year. What made it primed for cinematic adaptation was the fact that writers Tomokazu Ohara and Haruka Utsui used Pokémon as a world with which to create something wholly unique upon. They scrapped usual hero Ash for new lead Tim Goodman: a twenty-something who wanted to be a Pokémon trainer before life steered him towards more pragmatic goals. While this fictitious class of animal is still found in the wild where he lives like any other, the fresh wrinkle is a metropolis (Ryme City) built atop the foundation of equal co-existence between Pokémon and humans without battles. Like any urban co-habitation (think Alien Nation), that nexus point breeds drama.

Director Rob Letterman’s Pokémon: Detective Pikachu (as cobbled together from numerous drafts credited to himself, Nicole Perlman, Dan Hernandez, Benji Samit, and Derek Connolly) therefore needs a reason for Tim (Justice Smith) to go to Ryme. Not only is tragedy an effective method of making people do what they don’t want, it’s also the perfect means towards cultivating a mystery to solve. In this case it concerns the death of his detective father Harry by the telekinetic force of a rogue Mewtwo (an ancient and rare species). Because his Pokémon partner Pikachu (Ryan Reynolds) somehow survived the accident to return home with a case of amnesia as Tim arrives, maybe police reports were wrong. Harry might still be alive and they’re the best shot at discovering the truth.

While the film treads into noir territory with darker themes of genetic mutation and heightened violence orchestrated by the son (Chris Geere’s Roger) of Ryme City founder Howard Clifford (Bill Nighy), this is a PG-rated kids film. The tense moments of action are therefore often diffused with the cuteness factor of letting rabid monsters return to their goofily docile ways once the drug they’ve inhaled dissipates. Alongside that is the comedy inherent to an odd couple pairing like Tim and Pikachu’s based on the former’s staunch desire to leave and the latter’s loquaciously disjointed tangents—dialogue humans shouldn’t be able to understand. So Reynolds runs his mouth like always as Smith tries to not look completely insane to a world watching him converse with a (supposedly) non-verbal pet.

Add the over-exuberance of a blogger aspiring to become a hard-hitting journalist who’s willing to expose her station’s owner’s (Roger) own transgressions (Kathryn Newton’s Lucy Stevens) and circumstances prove ripe for laughter (the trio of Tim, Lucy, and Pikachu is packed with big personalities) and suspense (they’re ostensibly kids caught in way over their heads with a dangerous conspiracy). Their inability to trust anyone pushes Harry’s lieutenant (Ken Watanabe’s Yoshida) away while their sole ally in Howard is stuck in a wheelchair and unable to help in the field. They must instead rely on kind-spirited Pokémon, cajole unsavory figures into providing them information, and avoid the Mewtwo that remains on the loose. Through twists and turns, the truth trickles in to transform this fantasy adventure into sci-fi thriller.

So a lot is happening beneath the surface to keep us on our toes even if none of it is too surprising in the long run (this is a kids’ movie remember). The filmmakers do well to avoid creating a dense puzzle that will only alienate youngsters when leaning on the Pokémon for comic and narrative relief can keep things moving. So rather than hinging chase scenes on subterfuge to deflect attention through confusion, Letterman and company utilize the powers at their disposal to make the ride as important as the destination. Let the Aipoms use their hand tails to grab hold of limbs and scare their prey. Let Psyducks’ headaches explode into a force bomb that disables anyone within its radius of effect. Let the Pokémon play.

For that reason I do think fans of the franchise will get more out of Detective Pikachu simply because what these characters can do becomes Easter egg fodder they can anticipate and enjoy beyond the constraints of the plot. There’s that extra level someone like me can’t engage with besides the inherent humor of fluffy critters screaming their names with enough emotional gravitas to transcend any language barrier. It’s okay, though, because that superficial, aesthetic entry point gives the retread mystery worth nonetheless. Hearing Reynolds and Smith bicker while one is doing so as a pint-size yellow mouse/bunny is frankly all we need to be entertained. The world building is but a cherry on top with magical weirdos such as Dittoes merely sweetening the bowl further.

There’s also some interesting political frameworks touching upon autocratic rule, the entitlement of the rich, and the enslavement of the “other” that’s able to infer upon our current state of affairs without overshadowing the cartoonish effect of good versus evil with heavy-handed proselytizing that will go over children’s heads anyway. It instead plays simply as a dividing line to make the point that forcing an autonomous life to act against its will can never be tolerated—that corrupt leaders do tend to create scenarios wherein fear sows mistrust towards those they seek to control. And as the villains devolve, heroes rise to the occasion with a can’t-quit attitude cherishing the lives of innocents above their own immortality. They willingly sacrifice themselves for others rather than others for themselves.