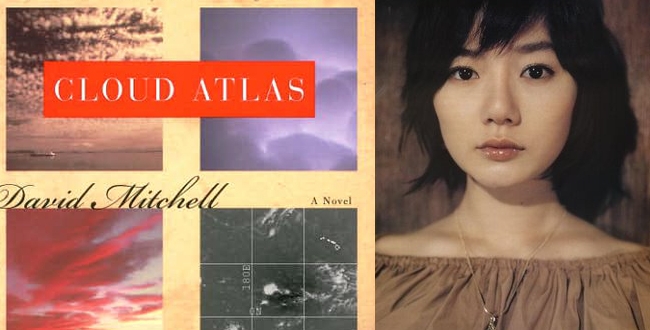 Cloud Atlas, the epic film to be directed by both The Wachowskis (The Matrix films, Speed Racer) and Tom Tykwer (Run Lola Run, The International), based on the novel by David Mitchell, already has Tom Hanks and Halle Berry attached to play what may be multiple roles. The narrative consists of six tales told by six leads across six distinct moments in time throughout the history of the world and into the future.

Hugo Weaving, Ben Whishaw, Susan Sarandon and Jim Broadbent are also on board to star in the film. Now South Korean actress Bae Doona (The Host, Sympathy For Mr. Vengeance) is on board [Filmonic]. Donna will play Sonmi~451, a clone who once worked as a server at a futuristic fast-food chain and is now being interviewed before her execution for rebelling against the Totalitarian South Korea she lives in. This is the 5th tale in Mitchell’s 6 tale set-up, Sonmi the lead.

Weaving let slip that each story’s lead would play a role in the corresponding stories, so expect Donna to pop up throughout the film.

A reluctant voyager crossing the Pacific in 1850; a disinherited composer blagging a precarious livelihood in between-the-wars Belgium; a high-minded journalist in Governor Reagan’s California; a vanity publisher fleeing his gangland creditors; a genetically modified “dinery server” on death-row; and Zachry, a young Pacific Islander witnessing the nightfall of science and civilisation — the narrators of Cloud Atlas hear each other’s echoes down the corridor of history, and their destinies are changed in ways great and small.

Or not. Either way, how can you not be interested? The most expensive German production of all time (the entire film will shoot in Berlin at Babelsberg Studios) at a projected $100 million budget, the funding just got upped by $50 million, making the grand total somewhere around $150 million.

Production is slated to begin this fall.

Do you know Cloud Atlas? Bae Donna? Have you read the novel?