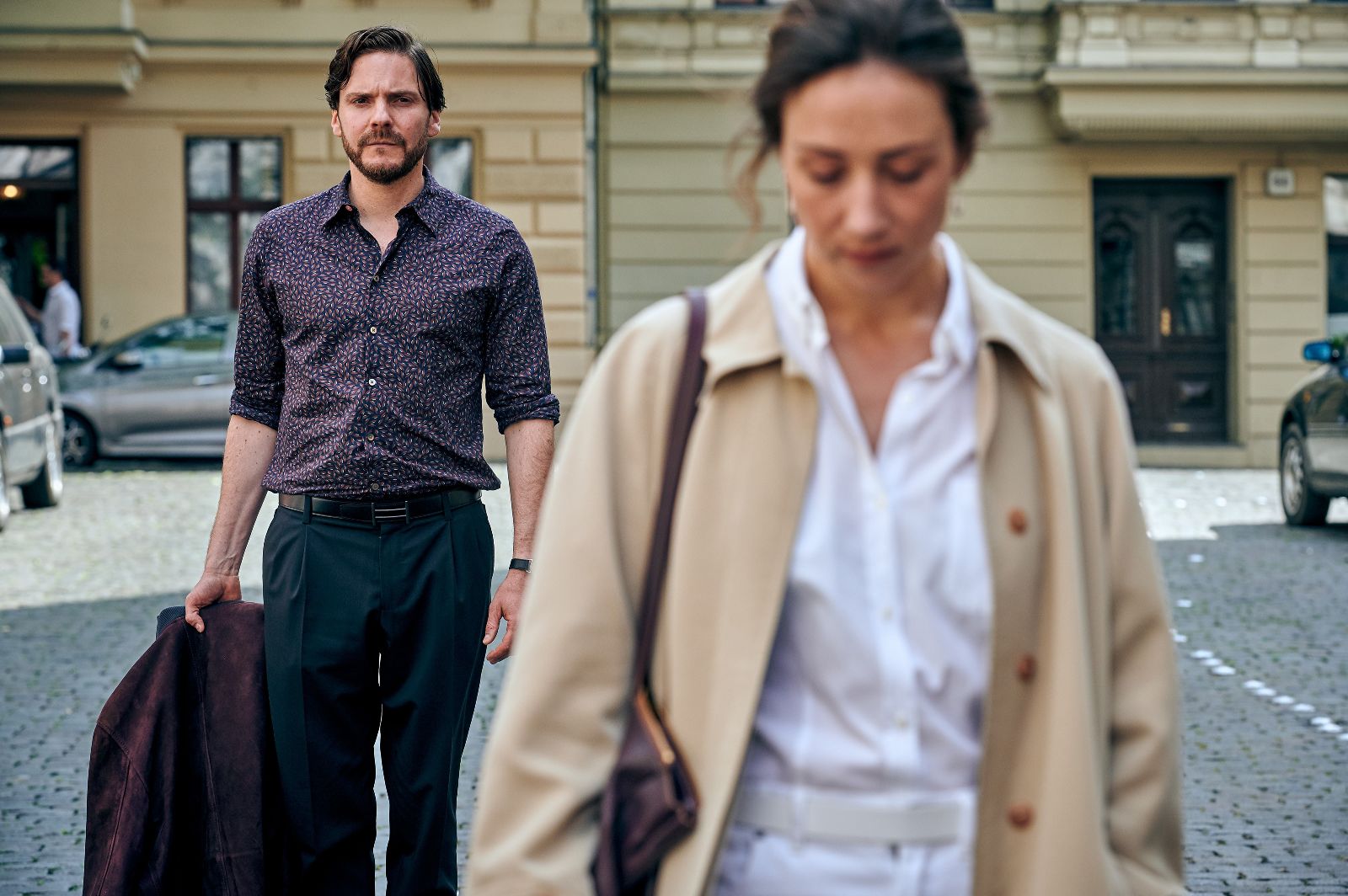 In Next Door, a famous actor living in the penthouse of a renovated Altbau in Berlin––complete with his own private elevator––has his life flipped upon confronting a seemingly unassuming neighbor at his local bar. The director is Daniel Brühl, probably the most recognizable German actor to emerge since the country’s reunification and even in villainous roles a generally endearing onscreen presence. Next Door is his first feature (Brühl gets credit as director and star) and swings for the fences in its attempts to address the idiosyncratic generational, geographical class divides of his adoptive city. It doesn’t quite come off.

Brühl was born in Barcelona (his mother is Catalan) and grew up in Cologne, the furthest West of Germany’s major cities. His breakout role came in Wolfgang Becker’s Good Bye Lenin!, a 2003 film by a West German director with romanticized notions of the East. The main character of Next Door mirrors most of that: a German from Cologne, a famous actor who came to prominence in the early ’00s by acting in a film that romanticized the East. His name is Daniel and he is played by Brühl.

There are only a few ways this level of meta can go. We have seen the bare-my-soul type (e.g. JCVD), but there is also the less palatable knowing-wink and self-flagellation we see here. Brühl’s film contains a bit of both, to be fair, yet he leans much more towards the latter. En route to its sociopolitical themes, Next Door takes passing shots at acting (apparently anyone can do it), superhero films (fair enough, but I’m sure a certain someone was well compensated for Captain America: Civil War), and celebrities engaging in performative social justice (you get the idea). The film is not without charm, and Brühl has crafted a nice aesthetic that capably (if rather obviously) borrows from Quentin Tarantino, who cast him in Inglourious Basterds (the opening credits, for one, are mustardy yellow and appear to be ITC Bookman, the quintessential Tarantino font).

Brühl shot Next Door in Prenzlauerberg, where he currently lives––the pleasant but infamously bougie district just north of Alexanderplatz and the TV tower, whose iconic globe is glimpsed from Daniel’s window. Much of the film takes place in his local Eckneipe, the Berlin equivalent of a dive bar and one of the only local places where you likely never hear English spoken (he goes because the establishment’s filter coffee reminds him of his mother, an odd Freudian touch that Brühl doubles down on with bar’s name “Zur Brust,” meaning “to the breast”). The script is effectively a little potboiler (archetypal of QT) and a two-hander wherein Daniel is constantly supposed to leave for the airport (on the way to a superhero script read) but keeps getting drawn back into a conversation with a neighbor, Bruno (Peter Kurth), who Daniel begins to suspect was in the Stasi.

The film’s verbal table tennis goes from veiled self-criticism about Brühl’s own career to larger questions about the city’s changing landscape––Bruno’s father used to rent the now-swanky penthouse where Daniel lives but was forced out by developers, a very real Berlin concern. Brühl is picking at the German capital’s open wound, and in the era of films like Parasite and Miranda July’s Kajilionaire, any story about a city where millionaires quite literally live on top of people of far smaller means will gesture towards the zeitgeist. Brühl’s film, however, feels strangely obsequious: too patronizing in its portrayal of the have-nots, too flippant with the haves. Contrary to the setup’s illusions, Brühl distances and thus absolves himself by making Daniel a nasty caricature–arrogant, speaking in brooding actorly tones, eager to pose for selfies and flirt with fans. Had he played it straight, Next Door might just have been vital.

Next Door premiered at the Berlin International Film Festival.