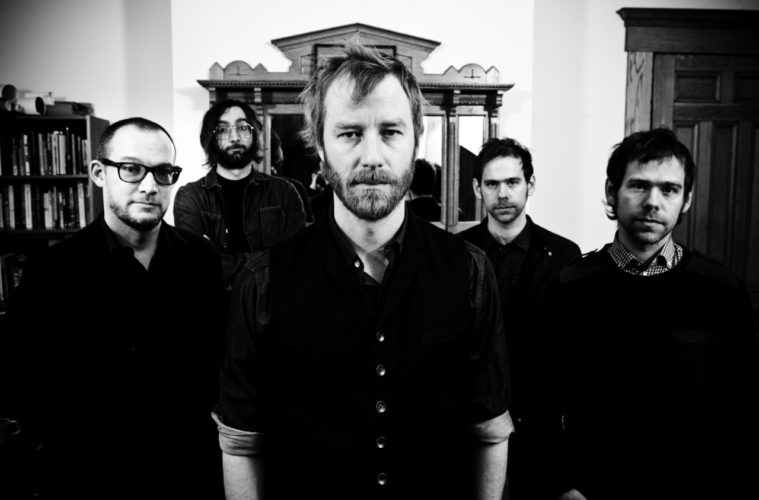 After being featured in such films as Warm Bodies, Warrior and Nick and Norah’s Infinite Playlist, and even writing an original tune for the drama Win Win, the Brooklyn band The National are finally getting the concert tour documentary treatment, and the film is coming sooner than expected. Announced today, Mistaken for Strangers (the title taken from a track off their stellar album Boxer) will be the opening film of the 2013 Tribeca Film Festival in New York City.

Directed by Tom Berninger (brother of frontman Matt), the film chronicles their last tour, for the album High Violet. With an April 17th premiere at Tribeca, the band is set to perform a concert afterward and then release a new full-length album in May. As major fans of the band, we’re greatly looking forward to seeing this one. Check out a video of them performing Bloodbuzz Ohio below, along with a still of the film below and the official press release. New York, NY (February 28, 2013)—The Tribeca Film Festival (TFF) today announced that the world premiere of Mistaken for Strangers, executive produced by Academy Award-nominated filmmaker Marshall Curry and produced by Matt Berninger, Carin Besser and Craig Charland, will open the 2013 Tribeca Film Festival, presented by American Express. Director Tom Berninger chronicles his experience on tour with his brother, The National’s frontman Matt Berninger, in this funny and affecting film, which will also play during the Festival’s 12th edition. The premiere, taking place on Wednesday, April 17, will be followed by a special performance by The National. The Festival will run through April 28.

Mistaken for Strangers follows The National on its biggest tour to date. Newbie roadie Tom (lead singer Matt Berninger’s younger brother) is a heavy metal and horror movie enthusiast, and can’t help but put his own spin on the experience. Inevitably, Tom’s moonlighting as an irreverent documentarian creates some drama for the band on the road. The film is a hilarious and touching look at two very different brothers and an entertaining story of artistic aspiration.

“Mistaken for Strangers exemplifies the independent spirit and vitality that Tribeca is excited to showcase every year,” said Geoff Gilmore, Chief Creative Officer. “We are thrilled to open with a film that embodies the journey of an independent filmmaker, and is at its core a highly personal and lighthearted story about brotherly love. It will be a great night of both indie film and music.”

“We’re really happy to premiere this movie at Tribeca, as New York has been home to us for these past 15 years,” Matt Berninger said. “I was happy to give my brother whatever access he needed. I just didn’t expect this movie to include shower scenes.”

“When my brother asked me along on tour as a roadie, I thought I might as well bring a camera to film the experience,” explained director Tom Berninger. “What started as a pretty modest tour documentary has, over the last two and a half years, grown into something much more personal, and hopefully more entertaining. It’s a huge thrill to be showing this movie at the Tribeca Film Festival.”

The National band members include Matt Berninger, Bryce Dessner, Aaron Dessner, Bryan Devendorf and Scott Devendorf. In 2010 the band released High Violet, which sold more than half a million copies worldwide. A brand new studio album from The National is slated for a May release on 4AD with a world tour to follow.

Are you a fan of the band?