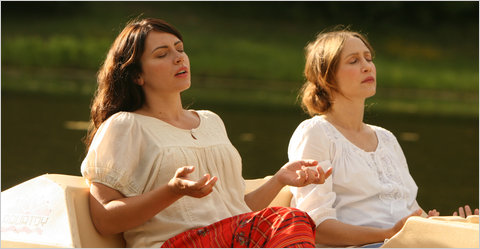 The Film Stage is headed to Sundance this year and the festival has just announced its line-up. With over 10,00 entries here is what they narrowed it down to. Most initially notable is Vera Farmiga‘s directorial debut, Higher Ground (pictured above). There is a clear lack of stars as NYTimes notes, so the excitement of discovery is back in full swing. The fest will also announce 6 more out-of-competition categories tomorrow. Check out the full list below via the official site.

Gun Hill Road (Director and screenwriter: Rashaad Ernesto Green) – After three years in prison, Enrique is back in his beloved Bronx, back in the arms of an estranged wife and back in the life of his teenage son, who is stumbling towards a transformation that will put the bonds of their embattled family to the test. Cast: Esai Morales, Judy Reyes, Harmony Santana, Vanessa Aspillaga.

Higher Ground (Director: Vera Farmiga; Screenwriters: Carolyn S. Briggs and Tim Metcalfe) – A frustrated young mother turns to a fundamentalist community for answers, but after years of dogma and loss, she must find the courage to ask the questions that will help her reclaim her life. Cast: Vera Farmiga, Joshua Leonard, John Hawkes, Dagmara Dominczyk, Norbert Leo Butz.

Homework (Director and screenwriter: Gavin Wiesen) – Quirky, rebellious George has no ambitions other than to cut his next class. But one day, one girl gives him the perfect reason to figure out who he really is. Cast: Freddie Highmore, Emma Roberts, Michael Angarano, Elizabeth Reaser with Rita Wilson and Blair Underwood.

The Ledge (Director and screenwriter: Matthew Chapman) – Perched on a ledge, a man says he must jump by noon, while a cop races against time to get to the bottom of it. Cast: Charlie Hunnam, Liv Tyler, Patrick Wilson and Terrence Howard with Christopher Gorham.

Like Crazy (Director: Drake Doremus; Screenwriters: Drake Doremus and Ben York Jones) – A young American guy and a young British girl meet in college and fall in love. Their love is tested when she is required to leave the country and they must face the challenges of a long-distance relationship. Cast: Anton Yelchin, Felicity Jones, Jennifer Lawrence, Charlie Bewley, Alex Kingston.

Little Birds (Director and screenwriter: Elgin James) – Amidst the stark landscape of the Salton Sea, two 15-year-old girls test the limits of their friendship when one follows the other to Los Angeles, only to discover that the boredom of home may be better than learning to survive in the big city. Cast: Juno Temple, Kay Panabaker, Leslie Mann, Kate Bosworth, Kyle Gallner.

Terri (Director: Azazel Jacobs; Screenwriters: Patrick Dewitt and Azazel Jacobs) – Orphaned to an uncle who is fading away, mercilessly teased by his peers and roundly ignored by his teachers, Terri is alienated and alone. When the dreaded vice-principal sees something of himself in Terri, they establish a friendship which opens Terri up to the possibility that life is not something to be endured, but something to be shared, and even enjoyed. Cast: Jacob Wysocki, John C. Reilly, Creed Bratton, Olivia Crocicchia, Bridger Zadina.

Beats, Rhymes and Life (Director: Michael Rapaport) – The story of the rise and influence of one of the most innovative and influential hip hop bands of all time, the collective known as A Tribe Called Quest.

BEING ELMO: A Puppeteer’s Journey (Director: Constance Marks) – The Muppet Elmo is one of the most beloved characters among children across the globe. Meet the unlikely man behind the puppet – the heart and soul of Elmo – Kevin Clash.

Buck (Director: Cindy Meehl) – In a story about the power of non-violence, master horse trainer Buck Brannaman uses principles of respect and trust to tame horses and inspire their human counterparts.

Connected: An Autoblogography about Love, Death & Technology (Director: Tiffany Shlain; Screenwriters: Tiffany Shlain, Ken Goldberg, Carlton Evans and Sawyer Steele) – Connected is an exhilarating stream-of-consciousness ride through the interconnectedness of humankind, nature, progress and morality at the dawn of the 21st century. For centuries we’ve been declaring independence. With insight, curiosity, and humor, the film explores whether it’s time to declare our interdependence.

Crime After Crime (Director: Yoav Potash) – Debbie Peagler is a survivor of brutal domestic violence incarcerated for her connection to the murder of her abuser. Two decades later a pair of rookie land-use attorneys cut their teeth on her case, attracting global attention to the troubled intersection of domestic violence and criminal justice.

Hot Coffee (Director: Susan Saladoff) – Following subjects whose lives have been devastated by an inability to access the courts, this film shows that many long-held beliefs about our civil justice system have been paid for by corporate America.

How to Die in Oregon (Director: Peter D. Richardson) – In 1994 Oregon became the first state to legalize physician-assisted suicide. How to Die in Oregon gently enters the lives of terminally ill Oregonians to illuminate the power of death with dignity.

If a Tree Falls: A Story of the Earth Liberation Front (Director: Marshall Curry) – The Earth Liberation Front is a radical environmental group that the FBI calls America’s ‘number one domestic terrorist threat.’ Daniel McGowan, an ELF member, faces life in prison for two multi-million dollar arsons against Oregon timber companies. But who is really to blame?

The Last Mountain (Director: Bill Haney; Screenwriters: Bill Haney and Peter Rhodes) – A coal mining corporation and a tiny community vie for the last great mountain in Appalachia in a battle for the future of energy that affects us all.

The Redemption of General Butt Naked (Directors: Eric Strauss and Daniele Anastasion) – A brutal warlord who murdered thousands during Liberia’s horrific 14-year civil war renounces his violent past and reinvents himself as an Evangelist, facing those he once terrorized.

Resurrect Dead: The Mystery of the Toynbee Tiles (Director: Jon Foy) – An urban mystery unfurls as one man pieces together the surreal meaning of hundreds of cryptic tiled messages that have been appearing in city streets across the U.S. and South America.

Sing Your Song (A film by Susanne Rostock) – Most people know the lasting legacy of Harry Belafonte, the entertainer; this film unearths his significant contribution to and his leadership in the civil rights movement in America and to social justice globally.

Troubadours (Director: Morgan Neville) – A musical journey tracing the lives and careers of James Taylor and Carole King, pillars of the California singer/songwriter scene, which converged in and around LA’s Troubadour Club in the late 1960s and early 1970s.

We Were Here (Director: David Weissman) – A deep and reflective look at the arrival and impact of AIDS in San Francisco and how individuals rose to the occasion during the first years of this unimaginable crisis.

All Your Dead Ones (Todos Tus Muertos) / Colombia (Director Carlos Moreno; Screenwriters: Alonso Torres and Carlos Moreno) – One morning, a peasant wakes to find a pile of bodies in the middle of his crops. When he goes to the authorities, he quickly realizes that the dead ones are a problem nobody wants to deal with. Cast: Alvaro Rodríguez, Jorge Herrera, Martha Marquez, Harold Devasten, John Alex Castillo. World Premiere

The Cinema Hold Up (Asalto Al Cine) / Mexico (Director: Iria Gómez Concheiro; Screenwriters: Iria Gómez Concheiro and Juan Pablo Gómez) – Four childhood friends in Mexico’s Guerrero colony toy with the idea of robbing a cinema. Each hopes that the heist will hurtle them past life’s obstacles, only to realize that the caper risks the only thing they have: their friendship. Cast: Gabino Rodríguez, Juan Pablo de Santiago, Ángel Sosa, Paulina Avalos. World Premiere

The Guard / Ireland (Director and screenwriter: John Michael McDonagh) – A small-town cop in Ireland has a confrontational personality, a subversive sense of humor, a fondness for prostitutes and absolutely no interest whatsoever in the international drug-smuggling ring that has brought a straight-laced FBI agent to his door. However, a surreal chain of events pulls him into the action. Cast: Don Cheadle, Brendan Gleeson, Mark Strong, Liam Cunningham, David Wilmot, Fionnula Flanagan. World Premiere

The Salesman (Le Vendeur) / Canada (Director and screenwriter: Sébastien Pilote) – Car salesman Marcel Lévesque operates by the rules of a bygone era, turning on the charm to make his quota. But the increasing decline of his fading industrial town threatens to plummet this peddler of dreams into an unfriendly reality. Cast: Gilbert Sicotte, Nathalie Cavezzali. World Premiere

Tyrannosaur / United Kingdom (Director and screenwriter: Paddy Considine) – For Joseph, a man plagued by self-destructive violence and rage, a chance of redemption appears in the form of Hannah, a Christian charity shop worker with a devastating secret of her own. Cast: Peter Mullan, Eddie Marsan, Olivia Colman. World Premiere

An African Election / Ghana, Switzerland, U.S.A. (Director: Jarreth Merz) – The 2008 presidential elections in Ghana, West Africa, serve as a backdrop for this feature documentary that looks behind the scenes at the complex, political machinery of a third-world democracy struggling to avoid civil war and establish stability for good. North American Premiere

The Blackpower Mixtape 1967-1975 / Sweden, U.S.A. (Director: Göran Olsson) – From 1967 to 1975, Swedish journalists chronicled the Black Power movement in America. Combining that 16mm footage, undiscovered until now, with contemporary audio interviews, this film illuminates the people and culture that fueled change and brings the movement to life anew. World Premiere

Family Portrait in Black and White / Canada, Ukraine (Director: Julia Ivanova) – In a small Ukrainian town, Olga Nenya, raises 16 black orphans amidst a population of Slavic blue-eyed blondes. Their stories expose the harsh realities of growing up as a bi-racial child in Eastern Europe. World Premiere

The Flaw / United Kingdom (Director: David Sington) – Within a few months in 2008, several American financial institutions failed, and before you knew it the U.S.A. was in the red. An imaginative blend of archive, animation and personal stories delivers a devastating indictment of the unfettered capitalism which has led to crippling, catastrophic income inequality in the land of the free. North American Premiere

Hell and Back Again / U.S.A., United Kingdom (Director: Danfung Dennis) – Told through the eyes of one Marine from the start of his 2009 Aghanistan tour to his distressing return and rehabilitation in the U.S., we witness what modern “unconventional” warfare really means to the men who are fighting it. World Premiere

Position Among the Stars (Stand Van De Sterren) / Netherlands (Director: Leonard Retel Helmrich) – The effects of globalization in Indonesia’s rapidly changing society ripple into the life of a poor Christian woman living in the slums of Jakarta with her Muslim sons and teenage granddaughter. International Premiere

Project Nim / United Kingdom (Director: James Marsh) – From the Oscar-winning team behind Man on Wire comes the story of Nim, the chimpanzee who was taught to communicate with language as he was raised and nurtured like a human child. World Premiere

Senna / United Kingdom (Director: Asif Kapadia; Screenwriter: Manish Pandey) – The story of the legendary racing driver and Brazilian hero Ayrton Senna takes us on the ultimate journey of what it means to become the greatest when faced with the constant possibility of death. North American Premiere

What do you think of the initial line-up?