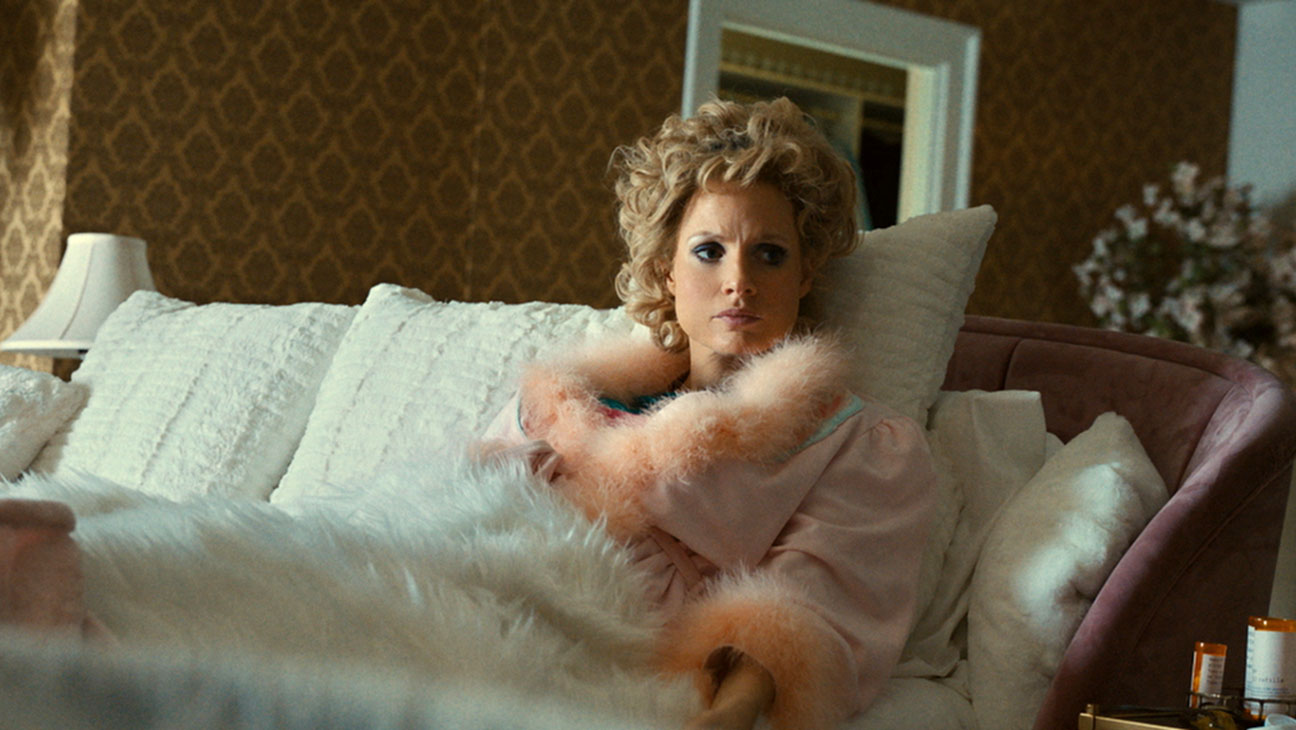 When we first see Jessica Chastain as Tammy Faye in Michael Showalter’s new film, she has a Bible in her hands. She’s young, she’s ready to take on the world as an evangelist, and—most importantly—Chastain looks and sounds precisely like her. Based on the 2000 documentary of the same title, The Eyes of Tammy Faye finds Chastain in exceptional form, embodying not only the kind of religious figure one would see on TV decades ago but, in some regions of the United States, currently on air day and night.

Showalter’s light drama pairs Chastain with Andrew Garfield as her husband, Jim Bakker, a preacher who can be spotted as a con man the first time we see him Bible-thumping before a small crowd in an auditorium at an even smaller Christian college. Nearly 50 years ago, the Bakkers started traveling around the United States with Bibles and puppets. They had a dream to save souls and make money while doing it. The former goal falls more in line with Tammy, a singer and kind-hearted woman who refused to denounce anyone for their sexuality (for several reasons a key point in Showalter’s film). The latter more aptly describes Jim, someone who shows a clear willingness and excitement for being on camera.

Its narrative follows the couple as they rise as TV evangelists, forming their own network, garnering 20 million viewers a day, and then their subsequent, inescapable fall from grace and fame. Linear yet jumping from year to year, the film finds a fair amount of fun, allowing the couple to laugh along with us, barely allowing them to become the butt of the joke. It’s far from a mean film, sympathetic towards Tammy’s plight as a woman forced into the shadows by her somewhat fraudulent (in multiple senses of the word) husband.

Whatever the story’s interest, The Eyes of Tammy Faye becomes a space for Chastain to spotlight her chameleon abilities. Even as Garfield gives a very (now perhaps customary) weird and commendable performance beside her, she wins every scene, moment, and line-reading, upstaging other actors by sheer believability alone. As the diet coke, pills, and money continue to flow, one wants her to be happy and be able to do what she thinks she’s meant to do: love people. And Chastain’s portrayal of Tammy Faye contains an endless amount of charm and love.

Showalter decides not to take any clean shots at the Bakkers, painting them without the absurdity, mockery, or scorching cynicism that could have been included. It keeps the film as lighter fare, lacking bite and skewed positively towards people who had a lavish lifestyle by the sheer faith of unsuspecting viewers who were expecting to be “saved.” Instead they gave their money freely to an ever-expanding operation filled with people who cared more about the cash than Christianity. There’s a sadness in that, regardless of one’s religious or spiritual beliefs; Showalter chooses not to explore that side of their operation, instead giving scenes to Tammy’s burgeoning music career. Despite the enjoyment and odd sensuality of those minutes, they feel lost in a bloated runtime, which hopes to cover an excess of information.

The Eyes of Tammy Faye will appeal to a massive audience; there’s value in that. Showalter made a bright, fun, pleasing film, colorful in both character, tone, and picture. I just wish it had a bit more criticism, a little more outrage, in its bones.

The Eyes of Tammy Faye screened at the Toronto International Film Festival and opens on Friday, September 17.