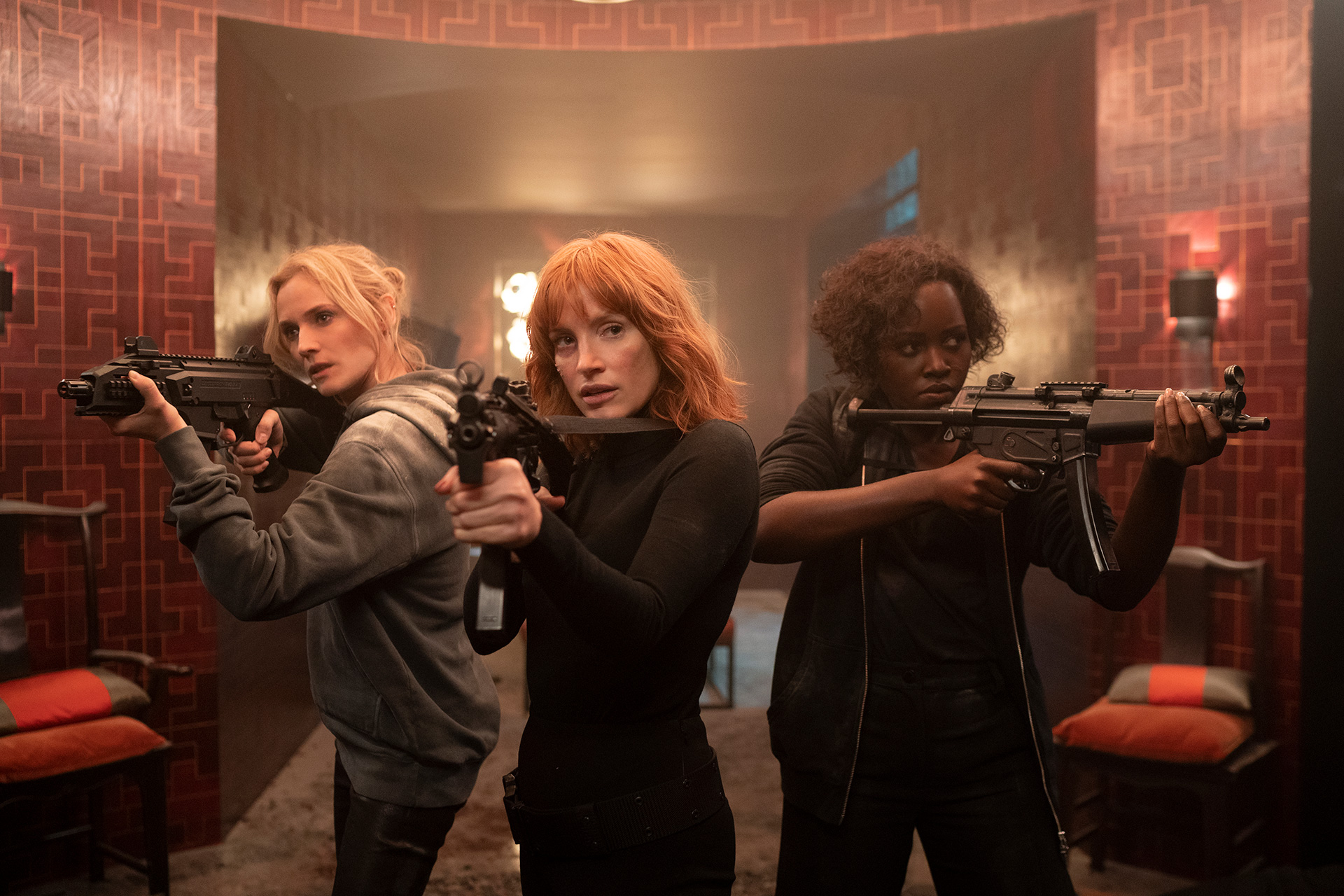 Nobody is talking about the Colombian wunderkind who single-handedly coded a drive that can backdoor any encrypted electronic device in the world from a single terminal. I know there’s zero need to talk about him since being the only person who can create and/or replicate something as valuable as his little hard drive isn’t long for a world where scarcity on such black-market weapons increases price, but still. Dude was just a twenty-something son of a drug warlord (with infinite time and resources) who was raised in a new generation with a soul as immoral as his dad’s. Just think about what he might have done if born in a position to cure hunger. Unfortunately, money makes money and money corrupts genius. Rinse and repeat. Such a waste.

But I digress. Director Simon Kinberg and co-writer Theresa Rebeck don’t bother letting anyone talk about this guy because he’s insignificant to their plot. It doesn’t matter who created the MacGuffin or how. It only matters that it was created and now threatens to bring about the apocalypse. The same goes for the characters they’ve given life to on the periphery of their leading quintet of bad-ass women. Whether altruistic spies, father figures, best friends, boyfriends, or husbands, every single one of the men running around The 355 are ticking timebombs awaiting their blaze of glory to push our heroines to the edge of sanity for vengeance. And it’s not accidental. A late tongue-in-cheek line, “We really do need men to explain everything.” proves it.

If you’re truly making this film from an off-the-cuff conversation about doing a Mission: Impossible-type story centered on women (Jessica Chastain and Kinberg shared one while shooting his debut Dark Phoenix, sadly blocking a more-qualified woman from the director’s chair), you might as well include the clichés. That means fridging a love interest right after the long-awaited consummation. It means having someone choosing to do right by humanity tragically die in another’s arms. And it means leaving loved ones behind despite knowing they’ll inevitably have a gun pointed to their heads for leverage. Rebeck and Kinberg bake it all in here from the opposite gender. Is the result any different than the many other M:I retreads with roles reversed? No. You’re only telling on yourself if you disagree.

Does that mean The 355 is good? That’s a different question altogether. Since most of those retreads starring men aren’t, this doesn’t automatically get a pass. I personally thought it was fine, though. The plot is obvious with every twist and turn proving easy to decipher, but the execution is effectively drawn regardless. And the rapport shared between its stars—the main draw anyway—does prove itself to be worth the price of admission. You’re here to see them kick ass, foil clandestine operations, and orchestrate their own. You’re here to see them beat up on guys twice their size, make mistakes so they can set them right, and see just how destructive the climactic battle will be before they narrowly escape with the device and their lives.

This is a popcorn flick through and through. The January release date isn’t great considering the cast (Chastain leads as a take-no-prisoners CIA operative named Mace with Diane Kruger’s German one-woman BND wrecking crew Marie, Lupita Nyong’o’s renowned MI6 hacker Khadijah, Penélope Cruz’s out-of-her-depth Colombian agency psychoanalyst Graciela, and Bingbing Fan’s enigmatic—let the film reveal her status as friend or foe—Lin Mi Sheng), but this fare walks a thin line between summer blockbuster and straight-to-the-bargain-bin VOD. Just ask Bruce Willis. To keep the theatrical release despite a year delay due to COVID (the streaming release on Peacock happening 45-days later, notwithstanding) is a victory. That the whole passes the entertainment test to keep us invested as terrorists vie to control our extinction is a nice bonus.

Think of the laundry list of archetypes this plotline needs and you’ll find each one included. Mace never wanted attachments and yet she cannot deny the appeal of falling for her best friend and field partner Nick (Sebastian Stan). Marie is always being second-guessed because her father turned traitor, her boss protecting her and helping her survive as the lone person she can trust. Khadijah packed her bags after a mission gone wrong, but some things are bigger than the quiet life built in the aftermath—especially when they ultimately put that life at risk. And Graciela just wants to help one of her patients (Edgar Ramírez) who has found himself in an impossible situation before going back home to her kids. Best laid plans and all that.

I’ll say one thing about Kinberg and Rebeck: they’re ruthless when it comes to satisfying the plot’s needs. Their body count is extensive and not just with faceless heavies meant to take a bullet the second they arrive on-screen. They’ve made a point to distill decades of cinematic women lost-too-soon to fuel their tormented “heroic” men’s rage into a cathartic switcheroo with all the emotionally manipulative results and over-the-top winks that demands. Does it sometimes derail the effective cat and mouse chases? Yes. But what they do is no different than what we’ve seen countless times before. We only believe it is because we know there’s an agenda at play. That’s not the filmmakers’ fault, though. Blame the industry for refusing to greenlight this version forty years ago.

So, take The 355 at face value and enjoy the ride. Kruger and Nyong’o elevate the material to a level it probably doesn’t deserve with Chastain and Cruz following closely behind. And because we get to see them all going after the device for their respective countries before teaming up off-the-books to finish the job, we’re able to see them in action against each other almost as much as they are targeting a shadowy organization led by Jason Flemyng. Chastain and Kruger provide the brute force, Nyong’o deftly infiltrates the invasively sprawling technology that surrounds us every day, and Cruz keeps it all grounded with personal stakes. They’re the incorruptible agents lost in a sea of corruption willing to die for your protection. Sequel potential abounds.

The 355 opens wide on January 7 before tentatively streaming on Peacock February 22.