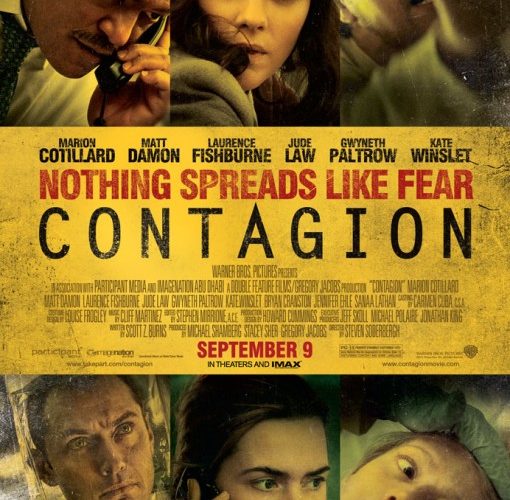 After teaming up for a very funny take on a true story with The Informant!, screenwriter Scott Z. Burns and director Steven Soderbergh decide to give life to a fictionalized take on a very real threat. In Contagion, government suits may assume a weaponized terrorist attack is the cause of a disease running amok, but we know the truth early. With patient zero a cute blonde businesswoman from an international corporation having a good time with clients at a Hong Kong casino, our annihilation may not begin with a malicious act at all. Our worst nightmare comes true as a single cordial touch of the hand spreads an epidemic strong enough to take out one percent of the entire world’s population. We’re shown no one is immune to death, whether those helping find a cure or looting the nearest bank. Our immune systems are a work in progress and unfortunately Mother Nature administers her own impromptu test trials for quality assurances.

The monkeys won’t be spared either. We need them in order to find a suitable vaccine for human use. The scientists tasked with finding a solution—CDC, WHO, over-achieving lab techs—must first isolate the disease by experimenting on our primate kin. From there they have to manufacture it, infect test subjects to discover how it infiltrates and evolves, and wait for the afflicted to die in order to calculate the exponential growth of its spread. All this is done before they can even fathom creating a way to stop it, a process that itself takes weeks to weed through in order to crown a winner needing another 90 days to ready for administration. Because of this, the fear takes us first, closely followed by violence and greed. The sick no longer pose the most imminent danger as the healthy devolve into heathens devoid of humanity, watching those close by fall down dead without even batting an eye.

Burns and Soderbergh understand this aspect to the chaos and allow it to permeate the plot. One could say it overtakes the disease as the main crux, our failing morality during the direst of situations showing how our race deserves to die. With an incubation period lasting barely 5 days, at least contracting this mutated amalgam of bat and pig strains will be a quick end—a slight weight off the shoulders as your throat closes, head pounds and a fever of 101 degrees leaves you immobile from seizure and fatigue. To combat it we must stay indoors, avoid physical contact and draw arms against those willing to kill for their own survival. We watch the news and hope those entrusted with our lives find an answer soon. Heroes are born and crucified, all while we continue touching our faces two thousand times a day and forget the infinite number of surfaces we share. Contagion shows us the myriad things we touch, the camera lingering on the tiniest glances of flesh on metal—the first step towards lying forever in a bio-hazardous mass grave. The reality of our own demise is palpable in the film’s precision, our inability to prevent it scarier than the predator itself. Scientists hope to contain facts and hide the truth until a cure is found, but people talk and loved ones tell loved ones until a telephone game meant to save lives ends up destroying more. And with the time stamped days flashing in subtitle on the bottom of the screen, we know exactly how fast our end can come. Strangers become killers and victims unwittingly as the masses are overrun by fear and anxiety. This is the real zombie infestation: an authentic look at the walking dead. One touch, one breath, one doorknob and the whole world crumbles to the ground.

It’s the kind of subject matter ripe for a taut thriller that will continue pushing the gas pedal before you have time to gasp for air. The filmmakers throw us into the mix from the start, following their Index Patient as her indiscretions and responsibilities seal her race’s fate. It’s Beth Emhoff’s (Gwyneth Paltrow) trek around the world from Hong Kong to Chicago to Minnesota that sparks the wildfire’s uncontrollable burning. It continues to Japan, England, and more as hundreds infected turn to thousands and higher until one out of every twelve people become statistically unable to see his/her next birthday. Such a global story needs a global reach and Soderbergh makes it happen with a pared down version of the formula he used on Traffic. No actor sees more than maybe thirty minutes of total screen time and no one is more worthy of life than the next. People take risks and others stay isolated—either way, though, that first cough may just be the beginning of the end.

In what to me is a fast-paced race against the clock, the all-star cast assembled does their best to flesh-out their characters despite limited exposure. We watch the CDC wrestle protocol and compassion with Laurence Fishburne, Jennifer Ehle, and Elliott Gould all standing out. Marion Cotillard and Chin Han show us the power of innocence over law as a dying village risks everything to survive. Kate Winslet’s epidemic responder copes with the disease’s scale as she does the footwork to investigate whiles Jude Law’s salacious blogger tries to warn the world about what is happening, his desire for a byline soon becoming a cash grab for their faith—love the Sheperd Fairey-esque ‘Prophet’ posters. Every facet of the process is touched upon as the randomness of our existence shows we aren’t the most powerful creatures on Earth after all. But it’s a father trying to save the only family he has left that we latch onto entering the hot zone. Matt Damon’s Mitch Emhoff is the first to watch a loved one die and also the only man helpless to see the world’s pain due to his improbable immunity. If ever there was a case to prove immortality as a curse rather than a gift, Emhoff’s suffering is all the evidence you need. While everyone runs around, sways opinion, invents miracles, and steals remorselessly, this man is looking behind the curtain into the soul of humanity and discovering it to not be as wonderful as he’d hoped. Just as driven for answers as those in hazmat suits, we relate to his plight the most. Riveted to our seats, we wonder whether he’ll end up the lone survivor walking a planet ravaged by an incurable Biblical-scale genocide.