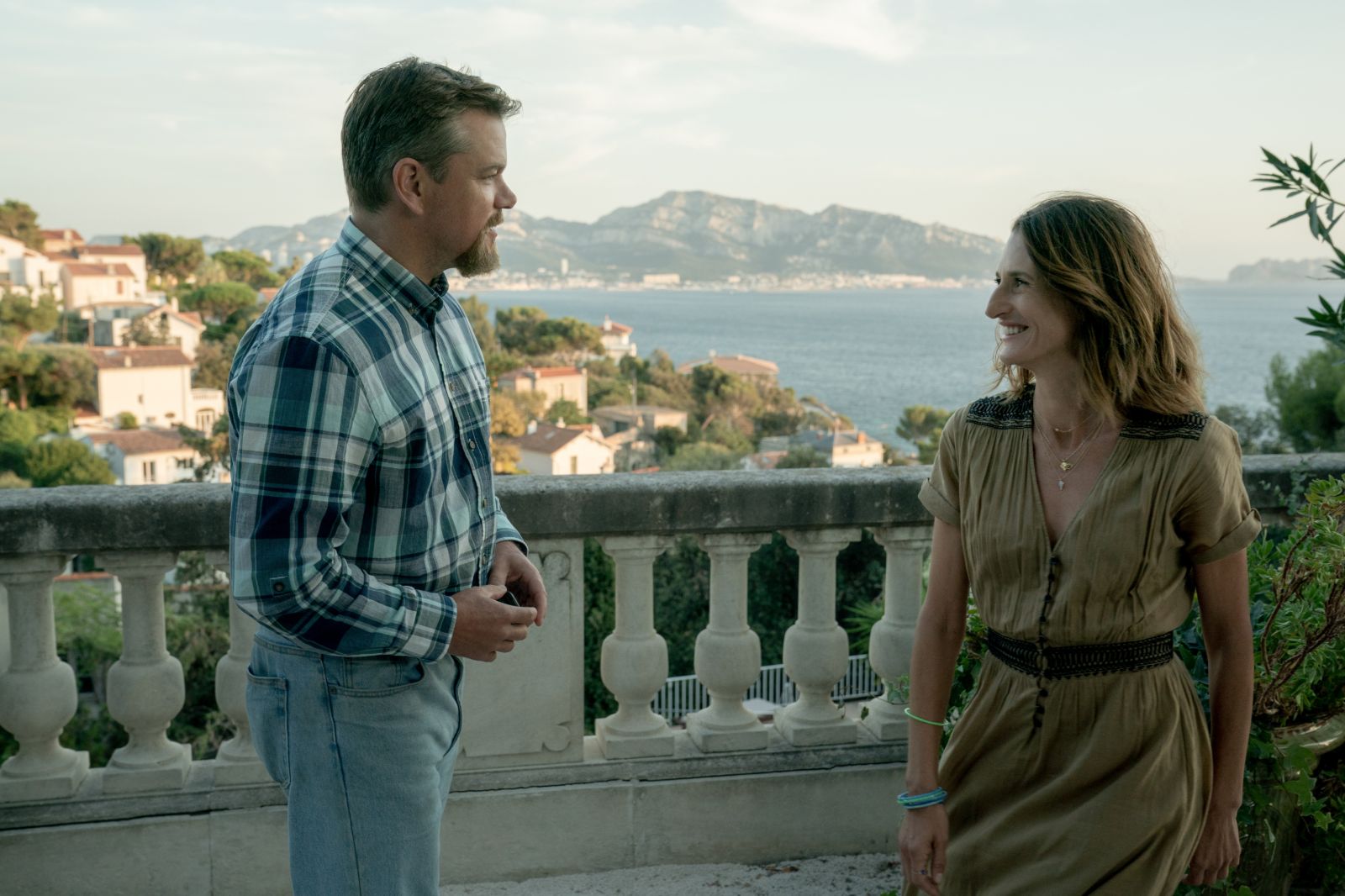 Is it possible to stand out and disappear at the same time? Matt Damon makes a convincing case study in Stillwater. As roughneck Bill Baker, he wears the signifiers of a blue-collar Oklahoman—a thick goatee, a camo-colored baseball cap, an eagle-clutched skull tattoo, a sturdy pair of jeans. He strides with a cowboy’s gait and talks in muttery, southern tones. After a long day of working construction, cleaning up houses wrecked by tornadoes, he chews on a cigarette and pulls his pickup into the local Sonic drive-thru. At home, he says a small prayer, quietly eats his hot dog, and falls asleep on the couch.

It’s a transformation—in look and presence—that occurs so immediately and comprehensively that it seems like an optical illusion. At first glance, he comes across as a Middle America cosplayer, treading close to the edge of parody. But the intrigue of Damon is in the way he flirts with expectations and appearances, and then watching how he silently subverts them. He’s the kind of movie star who has always been content doing the work of a character actor—he’s not afraid to burrow into somebody’s humanity and idiosyncrasy, even if it means cloaking himself in glasses, bad haircuts or dad bods. In other words, it doesn’t take long for Damon to translate the rhythms and textures of Bill’s vulnerable, solitary life into something more than artifice and stereotype.

That’s not to say you won’t laugh at him. There’s something inherently comical watching Damon tuck in his plaid shirts and stare blankly, arms crossed, on an international flight. Despite the title, most of director Tom McCarthy’s multi-genre mashup takes place in Marseille, France, where Bill travels to visit his daughter, Allison (Abigail Breslin), in the fifth year of a prison sentence for the alleged murder of her girlfriend, Lena, whom she met while studying abroad. The story is based loosely on the 2007 murder of Meredith Kercher, with Allison a light proxy for Amanda Knox, but McCarthy is more interested in the paternal point of view.

With four years left to serve, Allison has come across new evidence that might exonerate her, and asks her father to contact her attorney to examine the findings for an appeal. But the rumored information, which could potentially implicate a teenager named Akim, doesn’t have the weight to persuade a judge, so Bill haphazardly takes on the case himself. It’s an impossible task and a brash decision—a desperate attempt to correct his previous parenting mistakes—that begins an odyssey through a foreign city with uncertain detours and language barriers. This is a fish out of water tale in the way you envision a guppy navigating the Sahara desert.

Luckily, Bill finds help in Virginie (Camille Cottin), a local theater actor who offers to help board and translate for him. Though initially hesitant to help such a scandalous endeavor, she can’t resist her genuine kindness and curiosity for such a stubborn, Subway-eating American. In much the same way, her eight-year-old daughter, Maya (a scene-stealing Lilou Siavaud), can’t resist Bill’s fatherly presence around the house, where he offers handyman and babysitting services in exchange for Virginie’s efforts. It’s an unlikely dynamic that strikes the movie’s most sentimental cords, offering Bill a second chance at fatherhood, and at supporting a new family as he reclaims his own.

In that sense, it’s funny to think about this role being better-suited for Ben Affleck, who has made a recent habit of infusing the burdens and history of his personal and parenting life into his performances, supplying another element on which to layer his hardships and regrets. (It’s only a little bit ironic that the posters for Stillwater and last year’s The Way Back feature sepia-toned washes of concerned-looking, bearded men.) But McCarthy is resourceful enough to find an extra dimension in Damon. As Bill rides shotgun through Marseille’s winding roads and alleys, chasing Instagram leads and teenage hearsay with abandon, it’s evident that Jason Bourne’s highly-trained skills and metropolitan sensibilities have all but evaporated. Damon doesn’t need his own baggage to cast his performance into further relief—he just needs his filmography.

McCarthy has credited Mediterranean noir writers Andrea Camilleri, Massimo Carlotto, and Jean-Claude Izzo with inspiring this thriller, and much of Bill’s early determination mimics the investigative rigor on display in his 2015 Best Picture-winner Spotlight. But throughout its second act, Stillwater plays more like 2007’s The Visitor, McCarthy’s sophomore feature that pits together an old, white professor and an undocumented, multi-racial couple into a Manhattan apartment. In that movie, what starts as a culture clash between illegal immigrants and an elderly man becomes a gentle and moving bond, and McCarthy examines the subtle and powerful ways that people enter and exit our lives, leaving behind memories and the opportunity to change because of them.

That same dynamic is a welcome tangent in Stillwater, mostly because it’s the richest part. McCarthy co-wrote the script with Thomas Bidegain, Marcus Hinchey, and Noé Debré, and it’s obvious the French structure of the movie pivots away from the procedural to something slower and deeper. It spends time with its trio—and occasional quartet, when Allison earns a day of probation—and relishes the potential for Bill’s new lifestyle. He must answer Virginie’s inquiries about his voting records (“Did you vote for Trump?” she asks at one point) and gun ownership, and confronts her objections to the racist attitudes the pair encounters throughout their investigations. You want to keep living inside this part of the movie—to follow the tension underlying Bill’s apolitical ambition to free his daughter and his aloofness to the moral reckonings happening around him—and not the one that dashes the plot into a couple of puzzling, conclusive twists.

Indeed, there is more to unpack than McCarthy is willing to undertake here. After all, Stillwater is a movie that showcases a white man—immune to the racism around him—on the hunt for an Arab man, with little focus on the Arab woman whose death has brought him abroad in the first place. That might be a reductive description, something akin to the logline of Taken, but it underscores the challenge in depicting Bill’s endeavor as something more than American disruption. It takes an actor like Damon, channeling nuance and pathos and self-awareness, to take issue with those broader oversights and still find room for compassion, even when he’s the butt of the joke. “I’m a dumbass,” Bill says at one point, and you have to respect his honesty.