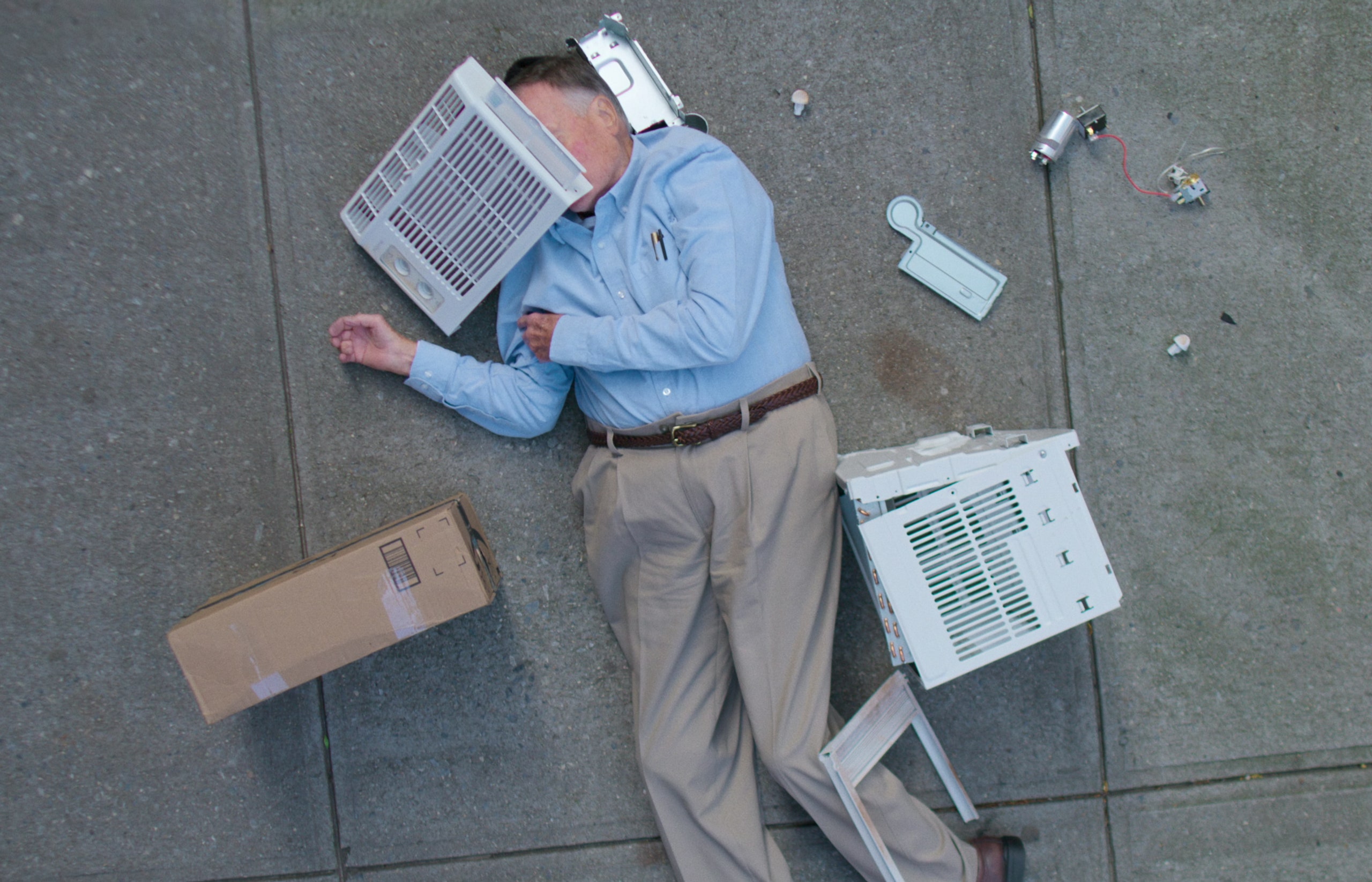 Any professional dealing with routine levels of stress and trauma is bound to develop a morbid sense of humor–and the funny horror-comedy 12 Hour Shift might become a cult classic amongst nurses. Written and directed by Brea Grant and set in a small rural hospital in Arkansas in 1999, the film finds cynical ER nurse Mandy (Angela Bettis) about to start what she thinks is a routine twelve-hour shift. Her definition of routine involves a scheme to poison patients with bleach while shift supervisor Karen (Nikea Gamby-Turner) harvests their organs for a local black market dealer. Things don’t go as planned when Mandy’s cousin by marriage, Regina (Chloe Farnsworth), shows up loaded after partying in a parking lot and forgets to take the kidney she’s supposed to pick-up. – John F. (full review)

Quentin Dupieux’s Deerskin can essentially be summarized as Divorced Guy Energy: The Movie. A ribbing of masculinity that alternates between bone-dry and morbid humor to great effect, it may come across as an easily discernible film ideologically. Yet its placement in the Special Presentations section of the Toronto Film Festival rather than the more apt Midnight Madness programme perhaps speaks to it as a truly confusing object on at least the basis of overall comedic effect. – Ethan V. (full review)

In The Disciple, a dedicated student of traditional North Indian music must grapple with the nagging feeling that he might not be quite good enough. The film is the latest from Chaitanya Tamhane, an Indian filmmaker who made a big splash in Venice in 2014 when his debut feature Court—a naturalistic film that quietly and comprehensively lampooned the Indian criminal justice system––won the Horizons award for best film. He was 27 at the time, still relatively young, yet some called it a masterpiece. Now at 33, Tamhane has followed it with a story about a person who hopes, perhaps in vain, to achieve such acclaim. We suggest approaching with a degree of caution if such doubts sound eerily familiar. – Rory O. (full review)

Where to Stream: NYFF’s Virtual Cinema (through Sunday at 8pm ET)

You cannot just watch part of Craig Roberts’ latest film Eternal Beauty. You might think you could since it’s seemingly as schizophrenic as its lead character Jane (Sally Hawkins), but that chaos is premeditated so that it can find tonal and thematic sense by the end. I was about twenty minutes in when “hate” started to solidify as a reaction to what I saw because it felt like Roberts was poking fun at the disease—purely using Hawkins’ monotone delivery and erratic actions for laughs. If I had stopped then, however, I wouldn’t have been exposed to the glimpses into her past or the trauma she’s suffered or the dramatic weight that comes with realizing nothing on-screen is trustworthy. I wouldn’t have discovered exactly how empathetic Roberts’ depiction truly proves. – Jared M. (full review)

There’s only one universal truth shared amongst all humans: one day, we will die. For some, this cold, uncomforting reality can lead to paralyzing anxiety as we think of who and what we’ll leave behind. For others, it’s a call to action to live every day with receptive empathy towards others and a curiosity to explore what the world has to offer. As already proven in her masterful directorial debut Cameraperson, Kirsten Johnson clearly falls into the latter category. With her brilliant follow-up Dick Johnson Is Dead, leave it to the director to create an exploration of death that is fun, bittersweet, and bursting with colorful imagination. In her portrait of her (spoiler warning!) still-alive father, she carries the same self-reflexive wit and vision as her prior film but takes it in a whole other direction. – Jordan R. (full review)

It doesn’t take long to explain a film like Hopper/Welles in relative detail. In 1970, Dennis Hopper took a break from editing The Last Movie and flew to Los Angeles to be interviewed by Orson Welles. Welles was working on what would later––much, much later––become The Other Side of the Wind. During a boozy candlelit dinner party, surrounded by a small group of friends, Welles’ cameras rolled on Hopper for a little over two hours as they discussed politics and filmmaking. This is exactly what we see. – Rory O. (full review)

Where to Stream: NYFF’s Virtual Cinema (through Saturday at 8pm ET)

I Carry You With Me (Heidi Ewing)

After directing documentaries for the last two decades, Heidi Ewing makes her narrative debut with this graceful look into the real lives of Iván García (Armando Espitia) and Gerardo ZaVe (Christian Vasquez), one which earned her Sundance’s NEXT Audience Award and Innovator Award. It’s a fitting honor from the festival because the film was born in Park City over drinks in 2012. Iván and Gerardo joined Ewing at the festival to support her project Detropia. There the couple told Heidi the story of their childhood, how they fell in love, and immigrated to New York City. She developed a fictionalized version of their story with actors depicting them as children and young adults, along with the real Iván and Gerardo appearing as themselves. – Josh E. (full review)

Where to Stream: NYFF’s Virtual Cinema (tonight only at 8pm ET)

Cassandra (played by Amy Nostbakken and Norah Sadava) reminds her mother (Maev Beaty’s Elaine) that we (humans) used to only live until forty. I think we often forget this fact—subjectively rather than objectively. The disparity between my generation and my parents’ is a veritable canyon as far as notions of domesticity, parenthood, and identity as a whole. Boomers were married with two kids by the time they exited college and now it’s not unusual to wait that long just to pick a major. We don’t move as fast as we used to both because we don’t have to and perhaps because we shouldn’t. And we certainly shouldn’t believe we have just one chance to get it right. It takes years to find a single semblance of self that’s worthy of unleashing upon the world let alone the series of reinventions necessary for our very survival. – Jared M. (full review)

Where to Stream: Seventh Row (available worldwide through Sunday only)

Assembled from a single couple’s trove of home movies—50 reels, nearly 30 hours, of 16mm footage captured at home and on vacation from the 1940s to the 1960s—My Mexican Bretzel is another challenge to a couple of bad, but lingering assumptions. First, that Generations Y & Z are uniquely prone to self-documentation; and second, that the quality of consumer-grade photographic equipment has meaningfully improved over the last, oh, 75 years. This is one of those photographic reveries that immerses you in a past at once tinglingly present-tense and poignantly conscious of posterity. – Mark A. (full review)

Where to Stream: NYFF’s Virtual Cinema (through Saturday at 8pm ET)

In a world where the hot-button issue of abortion has been a divisive point of political pull in which the majority of those in power will never have to grapple with the decision their entire lives, how do we shift our perspective to find the empathy towards those that are directly affected by when, how, and who can undergo the procedure? We can start with Never Rarely Sometimes Always, Eliza Hittman’s deeply moving chronicle of a teenager’s struggle to terminate her pregnancy. By steering clear of overtly political messages and naturalistically centering our perspective solely in the mindset of Autumn (Sidney Flanigan) through this journey, I can’t imagine a soul that won’t be inspired to give more careful consideration to those in similar situations. – Jordan R. (full review)

The Salt of Tears (Philippe Garrel)

Philippe Garrel’s modus operandi since 2013’s Jealousy has been unfussy, melancholic, black-and-white tales of Parisian men in the throes of romance, typically under 75 minutes. His latest, The Salt of Tears, which played in competition at the Berlin Film Festival, stretches to 100 minutes, but retains much of the lo-fi monochrome aesthetic, here centering on a cocky, shaggily attractive 20-something whose predilection for spurning women won’t win admirers from the MeToo generation. – Ed F. (full review)

Where to Stream: NYFF’s Virtual Cinema (through Sunday at 8pm ET)

A cramped setting, an onslaught of clever dialogue and a twisty plot go a long way in Scare Me, an impressive little movie from writer/director Josh Ruben, who also stars. North of New York City, secluded in a cabin in the woods, two writers weather a power outage by telling each other scary stories. Relative strangers at the start of the night, Fanny (Aya Cash) is a successful horror novelist and Fred (Ruben) is not. An incredibly impressive sound mix (and some minimal creature effects) aid our leads in their storytelling, each writer bounding about the cabin to convey the thrills and twists within. The location feels perfect for film, including a creepy second floor and a considerable amount of shadow that creates an ominous aesthetic. – Dan M. (full review)

Swimming Out Till the Sea Turns Blue (Jia Zhangke)

Of all the monumental parts that tend to constitute the films of Jia Zhangke–the shifting socio-economic landscapes; the departing mountains; Zhao Tao–none has been as prevalent or essential as time. He is a director with one eye on the then and one eye on the now (and occasionally one on the future). Time is once again key to his latest work, a documentary titled Swimming Out Till the Sea Turns Blue, in which Jia uses both the writings of Ma Feng and a series of interviews with celebrated authors from his native Chanxi to cast an eye over China’s shift from rural to urban living; the implications of that change if not the more state-censorship-sensitive aspects. The mood, as ever, is one of reminiscence. – Rory O. (full review)

Where to Stream: NYFF’s Virtual Cinema (through Tuesday at 8pm ET)

A dark back-alley drowned in shadow; towering concrete walls on either side; on the top right a row of headstones overlook; the glimmer of a walking stick emerges in the distance, and then a funeral procession. 15 minutes later a women disembarks from an airplane and is greeted not by family but by the airport’s cleaning staff. “There is nothing for you in Portugal, Vitalina,” they say. Welcome—or perhaps welcome back—to the world of Pedro Costa, the austere Portuguese director behind Colossal Youth (2006), In Vanda’s Room (2000), and other haunting works with which to grapple. – Rory O. (full review)

By the Book
The Prison in Twelve Landscapes
The Loveless