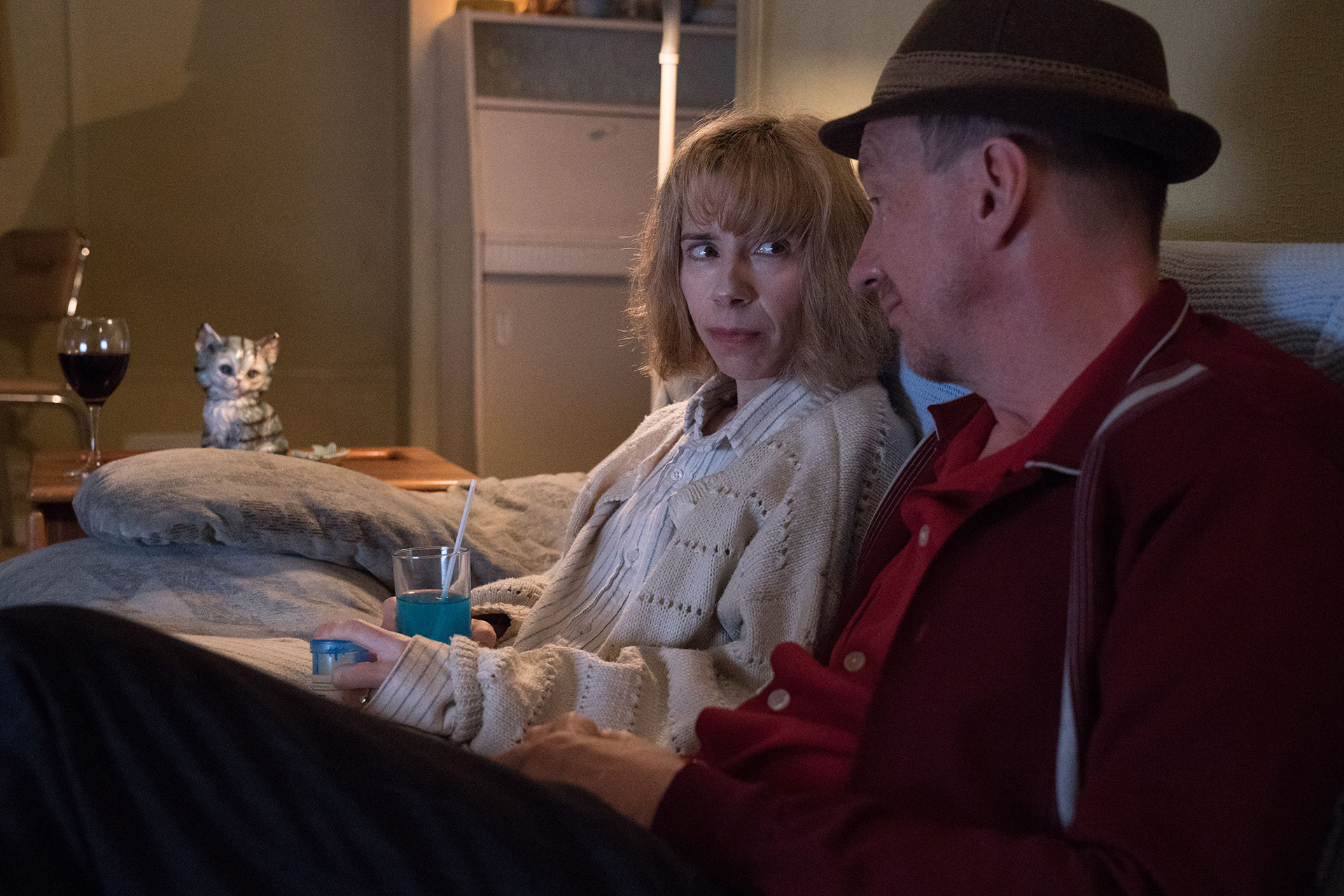 You cannot just watch part of Craig Roberts’ latest film Eternal Beauty. You might think you could since it’s seemingly as schizophrenic as its lead character Jane (Sally Hawkins), but that chaos is premeditated so that it can find tonal and thematic sense by the end. I was about twenty minutes in when “hate” started to solidify as a reaction to what I saw because it felt like Roberts was poking fun at the disease—purely using Hawkins’ monotone delivery and erratic actions for laughs. If I had stopped then, however, I wouldn’t have been exposed to the glimpses into her past or the trauma she’s suffered or the dramatic weight that comes with realizing nothing on-screen is trustworthy. I wouldn’t have discovered exactly how empathetic Roberts’ depiction truly proves.

It’s not about laughs (at least not solely). This is a very personal project for Roberts due to Jane being based upon someone from his own past. He spent three years reworking drafts and meticulously planning every scene down to the color palette before finally getting his A-list British cast in front of the cameras and that effort shows. His finished product becomes this wild ride through Jane’s psyche as she takes her medication, stops taking it, falls in love, and once more experiences the pain of devastating heartbreak (getting stood up at the altar many years ago in her youth was the main catalyst for her psychotic break). We move between reality and delusion so frequently that it becomes difficult to separate them. And that’s the point.

Unlike most films about schizophrenia that either use “normal” characters to provide an outside perspective on the subject’s illness or pretend the illness doesn’t exist until a reveal shows how someone we’ve thought was real isn’t, Roberts lets Jane be our guide. So we’re not supposed to be able to differentiate between reality and delusion since she herself cannot do the same. That’s why her nephew looks at photos of her as a former beauty queen (Morfydd Clark) and says there’s no resemblance. Maybe it is a photo of young Jane. Maybe it’s a photo of some random model Jane now believes to be herself. Maybe she was a beauty queen who got stood up at the altar or maybe that was her younger sister Nicola (Billie Piper).

Your sense of reality (and that of her family, rounded out by Penelope Wilton’s Mom, Robert Pugh’s Dad, and Alice Lowe’s eldest sister Alice) therefore has no room in this film because it also has no room in Jane’s mind. We’re at her mercy as far as what matters whether or not it’s an event that actually occurred or one that she only imagined has. Is the man’s voice (Robert Aramayo) that tells her he loves her over the phone that of an actual former fiancée or simply a masculine voice created to bolster that illusion? His desire for her to tell Alice’s son Jack (Spencer Deere) that he’s actually their child renders both plausible, but plausibility doesn’t make the potential danger from doing so any less destructive.

It’s a voice like the ones that arrive as radio DJs asking Jane to go against her instincts, spinning her around to both confront her depression and succumb to it. Her doctor’s (Boyd Clack) question, “Who are you?” isn’t merely a joke to giggle about as she tells him she’s certain that she’s Jane since a previous visit’s question might have earned another answer. And if that’s the case, who’s to say the people we meet in her life aren’t who she says they are either? Maybe her domineering mother smacked Alice in the face. Maybe Jane saw Alice’s husband Tony (Paul Hilton) kissing another woman. Maybe an old acquaintance (David Thewlis’ Mike) as delusional as her declares his love. Or maybe Jane never left the mental hospital.

We therefore laugh at the moments that exist in the contrast between her and them. We laugh because Jane laughs and we laugh because the others don’t. Case and point: Christmas. Jane brings a pile of wrapped gifts to her parents’ house only to tell them she bought each for herself so as not to be disappointed by what they always give. She has the receipts for them to reimburse her and subsequently opens each as if it’s the first time she ever set eyes on what lies within their packaging. That joy juxtaposed with their frustration (Nicola) and confusion (Mom and Dad) is priceless fodder for authentic comedy. The circumstances are sad, but the results aren’t. And we need that lightness to cope with the darkness coming.

Because there’s no getting around the fact that Jane is a broken soul or that Roberts won’t hide this stark reality. She’s trapped inside a mind that too often betrays her—one that’s walled off into sections holding her past self and present self hostage from the other, each only visible via a tiny hole punched through the plaster. So while we smile at the good times, we also lament the bad. One moment Jane is feeling great and then the phantom ring of a telephone interrupts her happiness the next. One moment she’s getting out to visit Alice and then she’s locked inside her flat, compulsively tearing small pieces of wallpaper the next. And she doesn’t know how one becomes the other. It just happens without warning.

So while Eternal Beauty is oftentimes funny, it’s almost always dramatically profound and emotionally complex. Roberts centering his script upon the truth that “normal” doesn’t exist is why it can become all those things at once. Rather than relegate Jane as “outcast,” she’s here to show the others that they too can wear their pain and depression on their sleeves instead of burying it deep within to retain society’s idea of sanity. The notion that Jane embraces her schizophrenia as a superpower (Roberts’ words) can itself be damaging since it still singles the disease out as the “other” and his use of a painting as evidence of universal sadness is a bit on-the-nose, but the film’s heart is big enough to prop up intent above implementation.

It helps too that the formal execution of the visual style and fluid progression between scenes separated by physical environments as well as psychological ones is otherwise impeccable. Add its stellar cast with an equally heartbreaking and inspiring lead performance from Hawkins and it’s easy to lose yourself to the journey regardless of whether you feel secure about your footing within it. There’s something special to the fact we’re never safe because it reminds us how we aren’t in context with our own lives either. That’s not to diminish the severity of Jane’s struggles, though. Her ability to recognize who she is despite them doesn’t negate them either. It merely shows how self-acceptance provides power far beyond others’ traditional “stiff upper lip” posturing. Our imperfections give us strength.