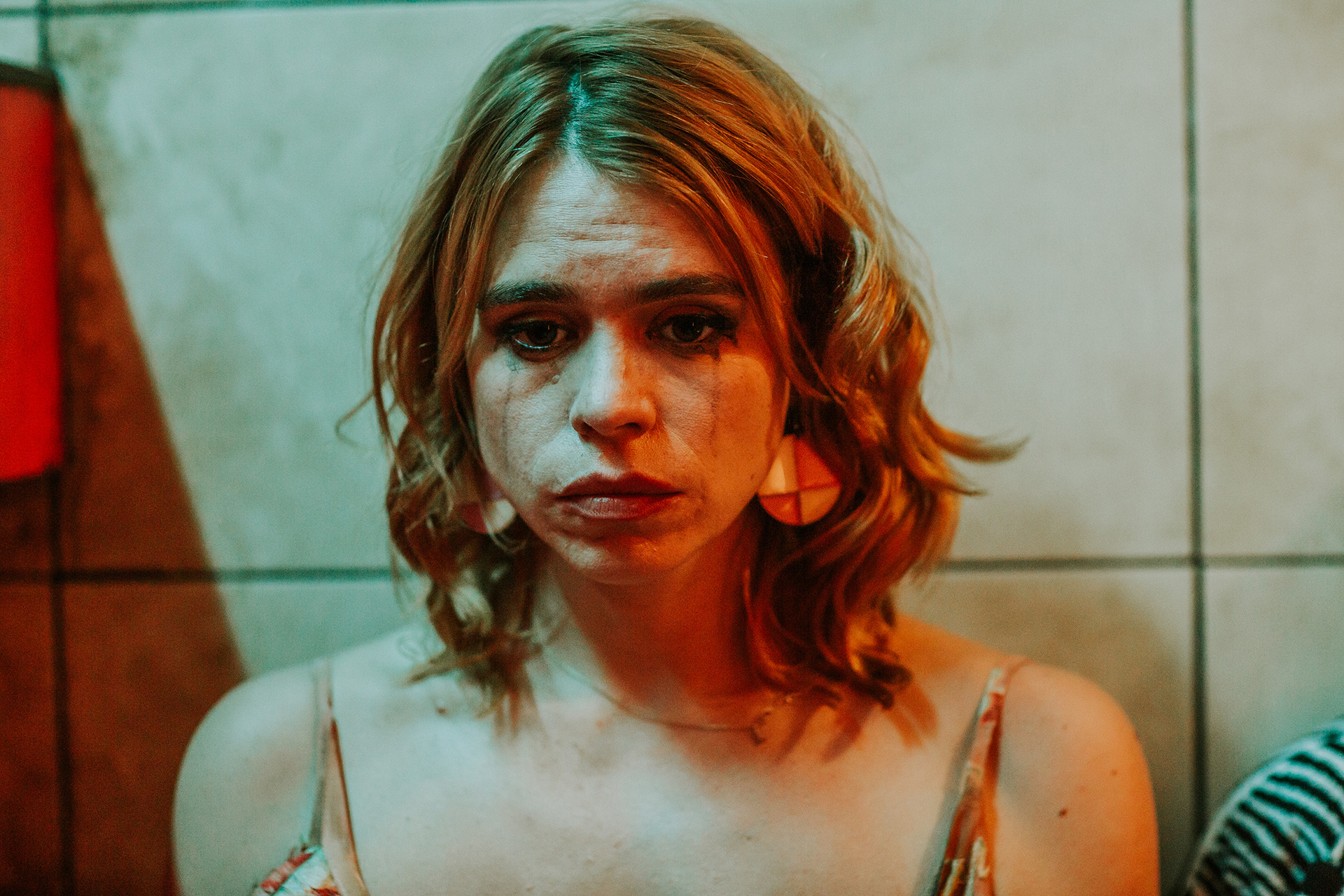 I love this line from the director notes of Rare Beasts: “When you live through nihilism/cynicism/hopelessness, your view of the world is not necessarily as it is, but rather your projection [of it].” Billie Piper’s speaking about the frank tone and dialogue of the heightened world she’s constructed as writer-director-star, but she could also be referring to the lens through which we now view our world via social media. One might say Piper has chosen the trending topic of “romantic love” and visualized the sort of doomscroll we’d find on Twitter for the topic pitting feminists versus chauvinists, progressives versus traditionalists, and the self-righteous versus the confused. It’s uncensored, honest, and crude. It’s relatable, deplorable, and hilarious. And it’s a singular vision of emotional schizophrenia.

Mandy (Piper) is at its center. A single mother (to Toby Woolf’s Larch) who currently lives with her mother (Kerry Fox’s Marion)—after she left her father (David Thewlis’ Vic) with nowhere else to go—Mandy is trying to cut through the bullshit that surrounds her on every point of the political and cultural spectrum. She’s an atheist feminist dating a religious “man’s man” (Leo Bill’s Pete) who laments that women these days don’t know how to be good wives. Not that she has any interest in being a wife right now. Hearing him say such things makes her wonder aloud whether he’s going to rape her—it’s the sort of thing a rapist would say. Dinner conversation turns to blowjobs, God, and whatever else with ease.

Does she love him? Yes. Does he love her? Yes. Do either like the other? Well, some characters might say it doesn’t really matter. That’s what a modern-day relationship is: depression, self-loathing, and an increase of anxiety, as though the normal amount dripping from our pores wasn’t enough. Look too closely and you’d probably say they hate each other before realizing that’s kind of the appeal. Mandy cannot escape the crippling sense of dread that’s made her writing so dark and sad that her boss threatens to fire her; Pete craves it. Pete is the epitome of a misogynist who feigns “nice guy” demeanor before letting his volatile temper flare into a fit of verbal rage, yet Mandy smiles swooningly in response.

Piper is stirring the pot with provocative hypocrisies and taboo, putting us inside the head of a woman struggling to traverse an existence that’s nothing but screams. Screams from a boyfriend who’s simultaneously excited and disappointed in her. Screams from a hyperactive son devoid of the tools to tell her that she’s abandoned him. Screams from a boss who inches closer and closer to the edge of kicking her to the curb, only to stop short and remark that’s she’s simply too attractive to let go. Screams from the inside of her head trying to convince herself that she has worth and can masturbate if she wants without having to finish a chore first. Screams from a chorus of contradictory women just as weighed down as she.

It’s not going to be for everyone; that level of frankness never could. It’s often awkward to sit through, too—especially when it concerns a family needling each other with expert precision to elicit a combustible reaction. And everyone is always talking over everyone else. Mandy could be answering one person’s question while someone asks another. The longer she takes answering the first, the more impatient the second is at repeating their query. Temper tantrums abound regardless of age—isn’t every middle-aged man’s sanctimonious response to his wounded pride akin to a seven-year-old writhing around on the ground?—and the pervasive bluntness has just as much chance of ending with a slap to the face as a kiss on the lips. Its unpredictability ultimately makes us anxious.

Piper is spot-on calling it “the panic attack feeling of life.” It’s Vic blaming Marion for her current lot rather than taking responsibility for stifling her dreams before moving on. It’s Larch’s incessant blinking when that panic sets in and all the adults yelling at him to stop because of how it permeates their defenses via embarrassment, shame, and unearned airs of entitlement. (Woolf is amazing, by the way, despite being asked to handle psychological turmoil well beyond his years where performance and content are concerned in order to match the sheer gravitas of the other scathing caricatures onscreen.) It’s the way every blow-up that would usually happen in private explodes in public as if nothing is amiss. That’s just how we interact now. Everything is at eleven.

So love isn’t blind in this equation. It’s destructive. These characters push each other’s buttons in petty ways to judge the response. Sometimes that response is a lie wherein they take a breath to understand the gravity of the situation and check their id at the door. That’s not to say the truth doesn’t also have the same effect at times, though—sometimes the impulse is the lie because emotions are running too high to articulate complex sentiments in a way that also cuts deep when the latter seems more important in the moment. These are the instances where everything stands still to highlight a genuine smile stripped of ulterior motives. We see it between both Vic and Marion and Mandy and Larch once each, but it’s enough.

They’re the moments when the characters log-off, touch grass, or whatever euphemism we’re using now to describe disconnecting from the steady stream of chaos online. We’re all guilty of it—both of being the people who berate others out of context because we’re locked in a binary system of “good vs. evil” that possesses zero gray and of being those who dare admit to what it is they want, no matter how it contradicts the manifesto they’ve written in their profile. Piper will reveal the strings of a stage set to slow things down or turn extras into kangaroo-court jurors to throw shoes on instinct instead of reason. She’s throwing convention to the wind to expose love and life’s glorious mess—whether you’re ready or not.

Rare Beasts opens in limited release and VOD on August 20.