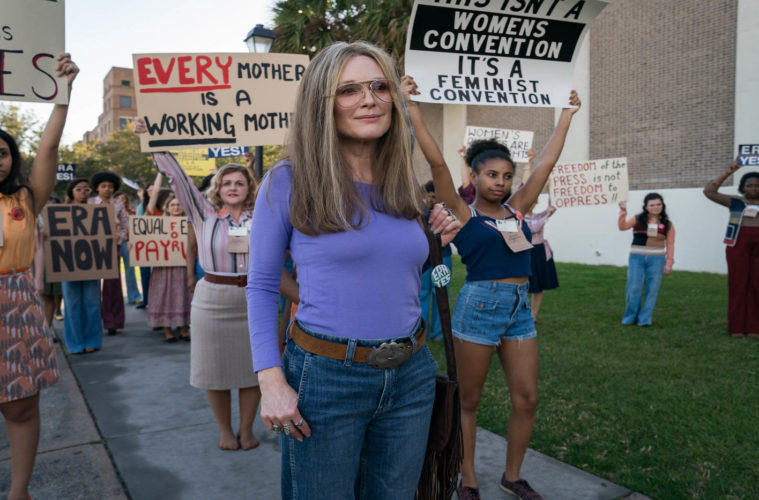 It’s hard to imagine someone better suited to take on the legacy of Gloria Steinem than Julie Taymor. Her first directorial effort in a decade, The Glorias offers a strange alchemy of straightforward biopic and style-driven inspiration. Overall, it’s tame work from the filmmaker, clear-eyed in her love for her subject.

One will recall Frida, Taymor’s other picture based on the life of a hero. That film plays a bit more energetic than this one. The Glorias is based on Steinem’s autobiography My Life on the Road, multiple actresses (Lulu Wilson, Ryan Kiera Armstrong, Alicia Vikander, and Julianne Moore) taking on the title role at different points in her life. Timothy Hutton continues his string of impressive supporting turns, here playing Gloria’s transient father Leo.

Taymor structures her story with a disjointed timeline, frequently cutting back to a bus ride featuring all incarnations of Gloria, who serve as an internal chorus of sorts. Vikander’s Gloria wonders out loud why she chose to say nothing in response to some bit of misogyny, to which the older, wiser Moore has a response. Many of the now-iconic moments in Steinem’s life are checked-off, from her riveting account (“A Bunny’s Tale) of working as a bunny at the Playboy Club to her co-founding of the influential “Ms. Magazine” alongside many impressive female colleagues. There’s an extended sequence exploring Steinem’s relationship with Wilma Mankiller (Kimberly Guerrero), the first woman elected as Principal Chief of the Cherokee Nation, that is essential.

Colorful asides populate the proceedings, including a nifty animated sequence that brings to life the famous cover art from the inaugural issue of the magazine. And while some of these flourishes appear limited by budget, they do well to break up the standard storytelling devices at work. Vikander is the highlight here, presenting a version of Steinem that feels like less of an impression and more of an embodiment of the activist made whole, a product of her own mistakes, her own experiences.

Bette Midler is a delight as Bella Abzug, while Janelle Monáe briefly shines (as always) playing Dorothy Pitman Hughes. It is Lorraine Toussaint, however, who nearly runs away with the whole movie. Her rendering of multi-hyphenate activist Flo Kennedy is exciting in a way few “based on real person” performances are. Truly, this is Taymor’s gift as a filmmaker. Along with the visuals and the vibrant color palette, she earns incredible work from incredible performers.

Everything is a bit messy, and perhaps that’s the intention in examining such a full life. Frankly, one wishes The Glorias was a bit more radical in its presentation. As it stands, the film gets the job done. Gloria Steinem deserves to be discussed and admired. Her work propelled the progressive movement in ways big and small. A quite lovely epilogue offers an optimistic view of the future. We need that now more than ever.