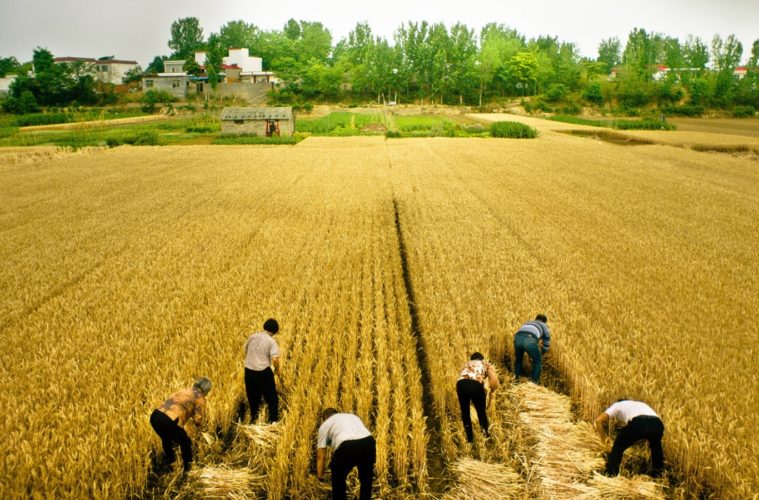 Of all the monumental parts that tend to constitute the films of Jia Zhangke–the shifting socio-economic landscapes; the departing mountains; Zhao Tao–none has been as prevalent or essential as time. He is a director with one eye on the then and one eye on the now (and occasionally one on the future).

Time is once again key to his latest work, a documentary titled Swimming Out Till the Sea Turns Blue, in which Jia uses both the writings of Ma Feng and a series of interviews with celebrated authors from his native Chanxi to cast an eye over China’s shift from rural to urban living; the implications of that change if not the more state-censorship-sensitive aspects. The mood, as ever, is one of reminiscence.

The interviews feel largely unedited, almost rambling at times, showing the manner in which writers speak about the past and not how they write about it. The first is the novelist Jia Pingwa, a man in his late sixties, whom the director shoots beside his family as they busily assemble a tray of dim sum–Jia’s earnest approach has always been endearing and Swimming Out sees it in full flight. The only woman to appear is the writer Liang Hong, whom the director leaves until last and allows the most time to for reasons which become immediately apparent. Indeed, the film is at its most poignant during Liang’s recollections of her mother and sister. One of the director’s most disarming qualities has always been his un-ironic appreciation for popular music. During a dramatization of Liang’s mother’s funeral (in which Liang herself acts) we hear a recording of Nessun Dorma. An earlier sequence offers Andrea Bocelli’s once unavoidable Time to Say Goodbye. They remain irresistible.

Alongside Liang, the film’s strongest scene-stealer is Yu Hua, an avant-garde novelist and autodidact who offers a candid history of his route into the industry. A secret weapon of comic relief, he also offers a commodity otherwise lacking in the film: genuine laughs. The director allows these divulgences to meander as the film itself meanders through an unusual chapter structure (numbering 1-15, with titles like Mother, Sound, Returning Home, and so on) while hopping back to some of Jia’s footage of Shanxi from the ‘90s–just the time when he began making films.

Swimming Out didn’t feature in competition at the Berlinale, an otherwise redundant distinction, perhaps, but one that might go some way to illustrating the smaller scale of this work. By basic design it is understandably slighter than the baroque storytelling of something like A Touch of Sin or the far swinging panoramas of Ash Is Purest White and Mountains May Depart. It is, however, after similar things. The mass migration of Chinese people from farms to cities has provided the backdrop of much of Jia’s latest work; and through his interviews with Liang, Jia, and Hua (who were each born a decade apart)–as well as some on the nose dramatizations of their recollections–we are given an almost chronological look at the shifting memories of that time.

Jia will enter his fifth decade this May, and with all its clear-eyed nostalgia, Swimming Out does feel like the work of someone of the cusp of such a milestone. (Interestingly, his previous non-fiction work, I Wish I Knew, came out around another significant marker for the director, in 2010). The filmmaker has increasingly sought to look back in his movies as China continues its own seismic sea change. The film’s poetic title refers to something Yu Hua says as he wanders past a spot where he once went swimming as a boy. The sea was yellow then, he explains, even though his teachers told him it was blue. Jia’s films continue to document that change in hue, however grand or humble they might be.

Swimming Out Till the Sea Turns Blue premiered at the Berlin International Film Festival.