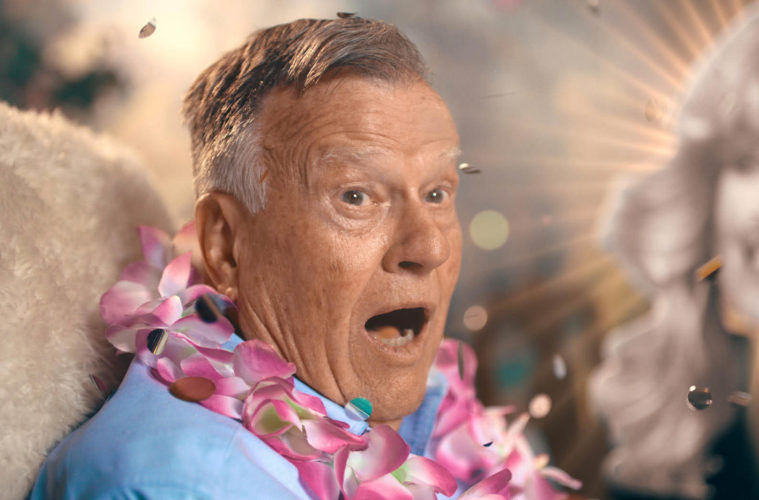 There’s only one universal truth shared amongst all humans: one day, we will die. For some, this cold, uncomforting reality can lead to paralyzing anxiety as we think of who and what we’ll leave behind. For others, it’s a call to action to live every day with receptive empathy towards others and a curiosity to explore what the world has to offer. As already proven in her masterful directorial debut Cameraperson, Kirsten Johnson clearly falls into the latter category. With her brilliant follow-up Dick Johnson Is Dead, leave it to the director to create an exploration of death that is fun, bittersweet, and bursting with colorful imagination. In her portrait of her (spoiler warning!) still-alive father, she carries the same self-reflexive wit and vision as her prior film but takes it in a whole other direction.

Her dad, Dick Johnson, is a Seattle-based psychiatrist who is finally hanging up his hat, but not by his own insistence. He had a heart attack some thirty years ago, which he admits was the most painful experience of his life, but has recovered and lived a relatively joyous life since then. However, early signs of Alzheimer’s are setting in as he double booked patients and even over-prescribed medicine to some. Guided by his daughter, he’s now setting out to move from their family home in Seattle into her New York City apartment and, in the process, reflect on the life he’s led and what comes next. It’s a journey that the inquisitive Kirsten Johnson, of course, takes part in both behind of and in front of the camera.

To capture such existential quandaries of the afterlife and mortality, the film doesn’t simply rely on intimate conversations between the filmmaker and her dad–although those are there, and are equal parts heart-wrenching and hilarious. Instead, the director conjures up inventive ways to visualize what heaven may look like and what the reason could be that he goes there. A life-long believer as part of the 7th Day Adventist denomination (which meant no movies, alcohol, or dancing), an adventurous individual like Dick Johnson was known to bend the rules a bit, expanding his daughter’s mind and setting her on a path after a viewing of Young Frankenstein as a child. His religion believes that the immediate afterlife is a waiting place and no one gets into heaven until Jesus returns.

For his daughter, it sparks a creative imagination of what this ultimate resting place may look like on a vibrant set featuring petals, confetti, chocolate, and popcorn–and placing her smiling father right in the middle. Mixed in between these fantastical sequences is a bit of the more macabre as we witness a number of scenarios in which Dick may bite the bullet. To spoil these Groundhog Day scenarios would take an amusing sting out of the movie, but suffice to say, these set-ups are less cathartic for her subject and more of an opportunity for him to go along on a fun ride–much like he’s done his entire life. When asked about these elaborately conceived deaths, Dick Johnson brings some self-awareness, saying, “Everybody dies so it’s not fantasy.”

Providing an emotionally poignant perspective, Kirsten Johnson is a presence through it all. By also focusing on the behind-the-scenes of the creative process when it comes to these fabricated death and afterlife scenes, what could have been a more somber or morose approach is lifted away. Instead, we see the humor when Dick Johnson mistakenly thought they would be using his real blood for a gag or when the director tells her father to slightly shift his arm after a tumble where’s lying “dead” on the ground. This consistently playful tone is a perfect tribute to a spirited man who seemingly always has a smile across his face.

It’s not entirely all laughs though. When Dick Johnson’s car gets taken away from him he equates to when his late wife was put into a nursing home after suffering the same disease. Tears fill his eyes as he comes to the realization of how his life will worsen for as long as he’s allowed to live. Johnson is also not just curious about her father, but those in his life, however minor they may be. In one sequence, she asks a worker who came to move items at his office about the experience of death in his family, resulting in a tender moment. The film is capped off with a beautifully bittersweet sequence that, while not spoiling, encourages every viewer to not take for granted the time we have with those we love.

When asked by her father why she is a documentarian and doesn’t make the “big bucks” in narrative films, she responds, “Real-life is more fascinating than what you can make up.” By exploring real death and getting profoundly personal when it comes to something we’ll all experience, Dick Johnson Is Dead might be one of the most universal films ever made. Providing levity and comfort to ideas of mortality, Kirsten Johnson has illuminated the sweet embrace of death.

Dick Johnson Is Dead premiered at Sundance Film Festival and will be released by Netflix.