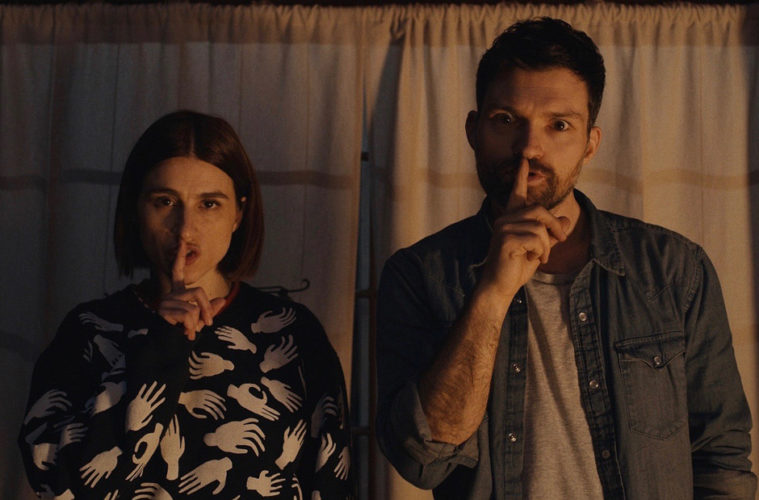 A cramped setting, an onslaught of clever dialogue and a twisty plot go a long way in Scare Me, an impressive little movie from writer/director Josh Ruben, who also stars.

North of New York City, secluded in a cabin in the woods, two writers weather a power outage by telling each other scary stories. Relative strangers at the start of the night, Fanny (Aya Cash) is a successful horror novelist and Fred (Ruben) is not. An incredibly impressive sound mix (and some minimal creature effects) aid our leads in their storytelling, each writer bounding about the cabin to convey the thrills and twists within. The location feels perfect for film, including a creepy second floor and a considerable amount of shadow that creates an ominous aesthetic.

From the start, it’s clear that Fanny is better at the game. She constantly helps Fred with each story, much to his chagrin. Cash, who you know from You’re The Worst, is the MVP here. Her confidence and charm serve as a source of admiration for Fred at first, before the night starts to devolve into something else.

A third character (Chris Redd) is introduced halfway through to complicate things, re-energizing a narrative at the precipice of stagnation. Redd, one of the most talented current SNL cast members, makes the most of his limited screen time. Ruben directs himself well enough, though it is clear he knows the x-factor in his arsenal is Cash as the co-lead. As motivations shift in the third act, Fanny runs through a gamut of emotions. The thesis of the entire picture hinges on the decisions she makes in the final minutes, so it’s a blessing that such a talented performer is at the reins. Ruben and Cash play off each admirably, though some credit must go to the editor, Patrick Lawrence. Snappy cuts and claustrophobic close-ups maintain a certain intensity that’s crucial.

There’s an obvious love for chamber mysteries past, Ruben making a specific homage to the great Sidney Lumet thriller Deathtrap at one point. Where Scare Me distinguishes itself from standard fare is in its rendering of fear. Specifically, the fear of irrelevance that Fred cannot shake. In this character we find a thirty-something white male acutely aware of his vicious limitations. When confronted–in a contained space–with a female who is smarter and tougher than he is, his worst impulses blossom. Ruben is never subtle about this examination, but goodness is it effective. During a Sundance year in which many films (Promising Young Woman, The Assistant, Into the Deep, On the Record) extrapolate on the sins of the entitled male, Scare Me emerges as a standout. This is a crisp slice of cleverness that demands a reaction.