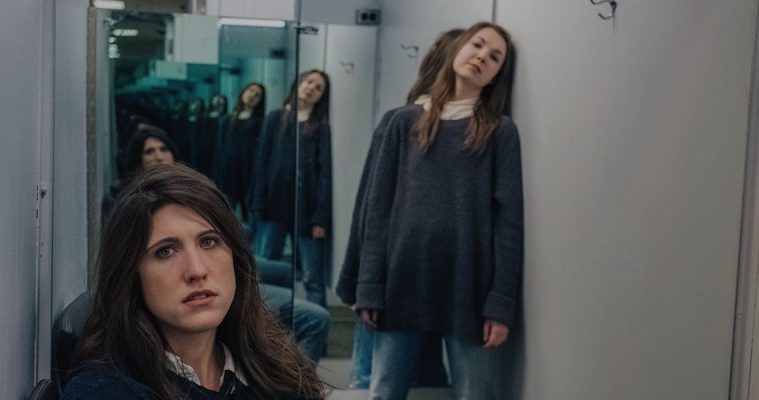 TIFF Review: ‘Mouthpiece’ is a Surreal Affair with a Brilliant Conceit

Cassandra (played by Amy Nostbakken and Norah Sadava) reminds her mother (Maev Beaty’s Elaine) that we (humans) used to only live until forty. I think we often forget this fact—subjectively rather than objectively. The disparity between my generation and my parents’ is a veritable canyon as far as notions of domesticity, parenthood, and identity as a whole. Boomers were married with two kids by the time they exited college and now it’s not unusual to wait that long just to pick a major. We don’t move as fast as we used to both because we don’t have to and perhaps because we shouldn’t. And we certainly shouldn’t believe we have just one chance to get it right. It takes years to find a single semblance of self that’s worthy of unleashing upon the world let alone the series of reinventions necessary for our very survival.

It’s no surprise then that one of the main themes throughout Patricia Rozema’s Mouthpiece (co-written by Nostbakken and Sadava, who originated the story on-stage with an acclaimed play of the same name) is this in-flux dynamic between Cassandra and her mom. She would love to believe they couldn’t have been more different considering her mother sacrificed a very promising career (the same one Cassandra pursued) to raise her children (Jake Epstein’s Danny is the other), but we know the opposite is true. We also know how much they cared for the other despite overreactions and hyperbolic grandstanding. But sometimes we mess up. Sometimes we get drunk and lay it all out in a very public fashion at Christmas without having a chance to apologize before the call arrives to explain we never will. Mom passed away.

What’s there to do in this situation? It would be hard enough to deal with the grief if Cassandra had called to say “I love you” the night before, so pairing it with guilt, regret, and anger only exacerbates emotions beyond sanity’s bounds. Couple this with the fact that her attack on Christmas came without knowing exactly who she was, let alone whether she wasn’t also failing to live up to her own potential and we begin to understand the forthcoming journey of insecure second-guessing happening in real-time. Because my saying two actors play Cassandra isn’t alluding to there being an old and young version of the character (Taylor Belle Puterman portrays the latter). I mean two actors play her simultaneously: one next to the other and almost always in conflict. One is recklessly impulsive, the other a (more) responsible dreamer.

It’s a brilliant conceit that must kill on-stage. A lot of how it unfolds onscreen is theatrical in that way too, but Rozema does a great job adapting things to the needs of a cinematic medium. She keeps them close, but not always together. While they ride her bike on two seats (one with helmet, the other without), they can also find themselves watching the other make a fool of herself or speak a necessary truth—as much an attentive audience member as ourselves. They’re yin and yang or angel and demon, in constant flux as to which is which depending on the scenario appealing to her sensibilities if not both in psychological agreement to feel the same. The format allows for as many belly laughs as heart-wrenching truths because we’re watching Cassandra’s inner monologue in all its endearingly embarrassing awkwardness.

Inside her head is where flashes of memories arrive from youth to recall details of Elaine’s life that may help with the funeral planned for two days later. Cassandra remembers moments with hindsight and maturity, seeing things aren’t as clear-cut as they may have seemed decades ago. She also retreats to the darkest recesses of her soul when emotions run too high to control, images of her drowning and gasping for air to find a voice untainted by self-destruction and self-hate. The two halves of her current form mock each other and embrace themselves in equal measure, everything happening so fast that she can hardly process her pain let alone push it aside to write the eulogy no one wants her to write. “Remember Christmas” is a running joke as funny as it is foreboding.

Because we don’t know what happened during the holiday—yet. Seeing Toronto covered in snow with decorations up provides evidence that the ordeal is fresh in everyone’s minds and thus a motivating factor in treating Cassandra with kid gloves whether her father (Ari Cohen), aunt (Paula Boudreau), or best friend (Jess Salgueiro). They want to shield this memorial from the hostility that sadly appeared more often than the love they know resided beneath it. But Cassandra needs the catharsis. She needs to work through her rage and blame and insecurities to both honor this woman who proves herself in memory to be worthy of it and also figure out how to compromise her two selves: the one fighting against patriarchal norms as a rule and the one who understands the grey areas in life.

It’s a surreal affair tethered to reality as musical interludes enter to continue Cassandra’s yearning to avoid before being woken to the fact that her suffering remains. And the way in which Nostbakken and Sadava talk to each other has a resonant honesty we can all relate with despite their shared character’s womanhood being crucial to the story. Even if Danny wasn’t married with a child, his version of this duality could never be the same because he wouldn’t be consistently comparing himself to his mother as both hero and archetype to avoid. She does it because society enforces it, family reinforces it (“When are you having a baby?”), and eventually it feels as though the choice is between flat-out rejection or defeated acceptance. Discovering the middle ground is a journey of hurt.

And that’s what Mouthpiece portrays. Nostbakken and Sadava have stripped away the artifice to get at the root of the problem—thoughts made flesh. A sex scene becomes a joint conversation about the thoughts Cassandra hoped the act would silence. Shopping for things needed at the funeral becomes a pirate ship’s plank wherein acquisition makes it both real and now. She isn’t therefore running through eulogy rough drafts as the film goes along as much as airing her frustrations in order to get them out of her head. She exorcises the bile, letting every unfair yet not wholly untrue thought trigger a scene from the past that proves more complex than knee-jerk indignation allowed. Eventually the rhythmic breathing-infused score will slow from anxiety-inducing staccato to a well-earned soothing calm.

Mouthpiece screened at the Toronto International Film Festival and opens on May 31.