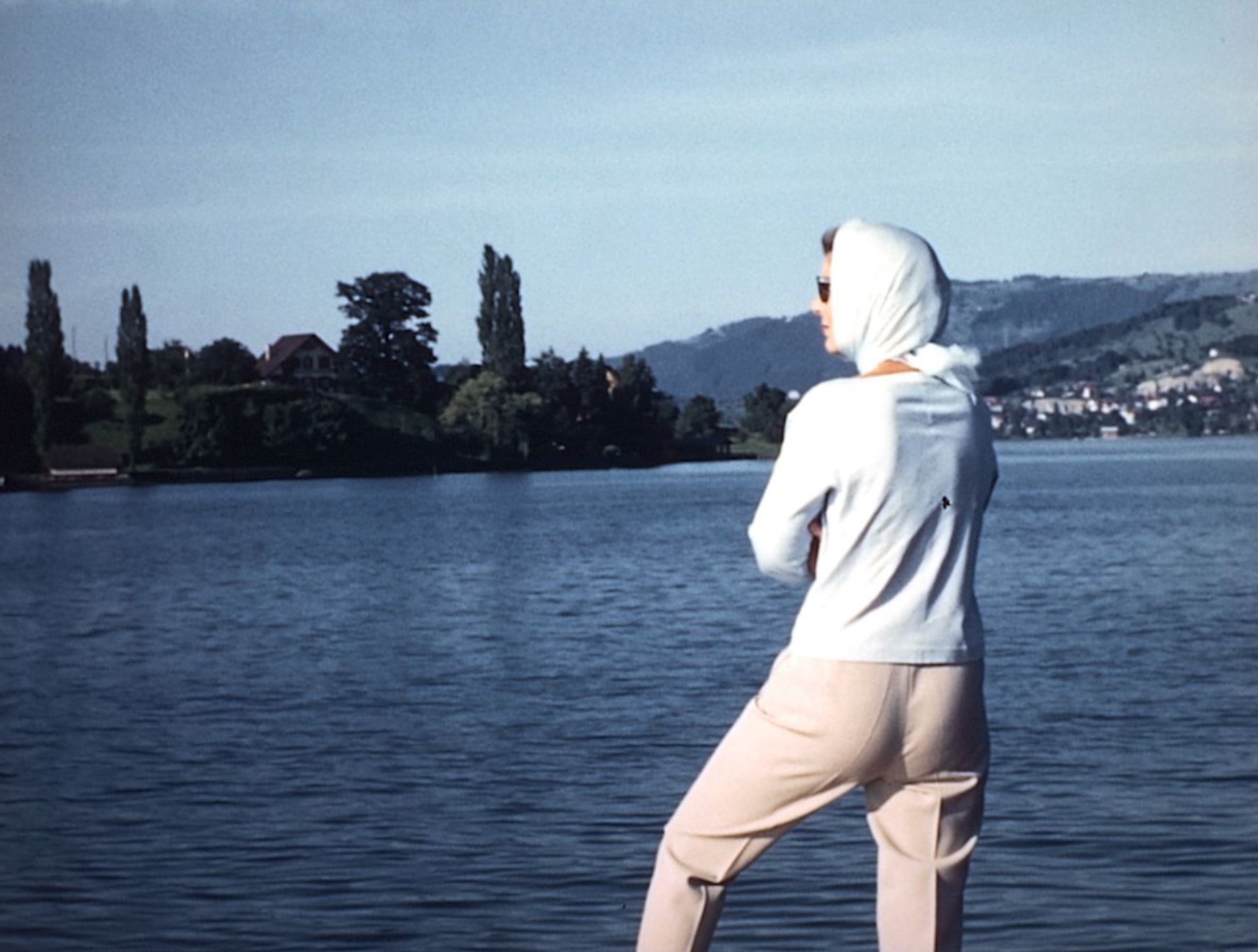 Assembled from a single couple’s trove of home movies—50 reels, nearly 30 hours, of 16mm footage captured at home and on vacation from the 1940s to the 1960s—My Mexican Bretzel is another challenge to a couple of bad, but lingering assumptions. First, that Generations Y & Z are uniquely prone to self-documentation; and second, that the quality of consumer-grade photographic equipment has meaningfully improved over the last, oh, 75 years. This is one of those photographic reveries that immerses you in a past at once tinglingly present-tense and poignantly conscious of posterity.

The couple in question are, we’re told, Vivian and Léon Barrett, Swiss and childless. In her headscarf and sunglasses she looks like Isabella Rossellini (or, from certain angles, Rebecca Front); he, it must be said, is something of a Hoskins-chested zaddy in the copious footage of them skimming across the continent’s waterways in a wood-paneled cabin cruiser. Camera-buff Léon, who takes some ambitious aerial shots, records a life of retro glamour, with images to match: A ski mountain in the Alps and a bullfight in Spain, the Sagrada Familia and the Notre Dame, a villa next to a frozen-over Lake Geneva and a terrace in Majorca are rendered in colors that are supersaturated but sharp; there’s a little bit of grain noise like beauty spots, and aside from issues with contrast in overcast or nighttime, the film has the crystalline unreality of memory. There is the occasional digital manipulation of the celluloid for subjective slow motion or b&w, isolated foley effects and added newsreel-style narration for the devastating crash at the 1955 edition of the 24 Hours of Le Mans (which our couple attended!), but mostly the footage is silent, like it’s being shown off on a living-room projector—the better to emphasize the on-screen text.

The narration, purportedly, comes from Vivian Barrett’s diary, and covers Léon’s hearing loss and discontinued career as an aviator, and subsequent success selling a new antidepressant called “Lovedyn,” as well as Vivian’s musings on freedom and death and truth and seeking. I don’t consider it a spoiler to say that this “diary” was written by Mexican Bretzel’s director, Nuria Giménez—devices such as Eastern spiritual guru whose writings Vivian quotes throughout her life, or the lost love “Leo” who represents an unrealized looking-glass version of her life with Léon, are obvious contrivances. The couple in the home movies are Giménez’s grandparents, Frank and Ilse; the film is at once her own history and her own imagination, and all the more interesting for it. Giménez has taken their home movies as a creative-writing prompt, and constructed a story around the pictures. The effect is something like an inversion of Sarah Polley’s Stories We Tell: Here we have real footage and a spurious domestic mythology, instead of the other way around, but a similar audio-visual weighing of a family’s public and private narratives, as well as a thesis on the constructedness of contentment.

Don’t go into this slideshow expecting the intellectual effervescence of Sans soleil or the homespun heartache of News from Home. Giménez offers up plenty of banalities about the difference between “seeing” and “filming” and between the “freedom of oblivion” and the “slavery of memory.” But the story she tells is adequate as a peg to hang the illustrations on. It’s a melancholic backdrop, with motifs of trauma and loss. The words reflect the shadow cast by the simple fact of Frank and Ilse’s aging—the years begin to tell, subtly at first and then all at once, as they hurtle forwards through the age of better things for better living through chemistry. There are no overt markers of time, but their life of leisure, ostensibly funded by “Léon’s” fortune made in the brave new world of pharmaceuticals, mirrors the prosperity of post-WWII industrial society, with early glimpses of rubble-reduced Gothic architecture and continental resorts soon enough forgotten as Frank and Ilse forsake the Old World for the New. We see America through their eyes, and it looks like the Kodak Colorama: The lit-up marquees of Broadway and Reno; the view of Central Park from the Empire State Building and the Hawaiian archipelago from an airliner; the novelties and nature of Los Angeles and the desert West. If you’ve ever been in your feelings about #tbt, this is a movie for you.