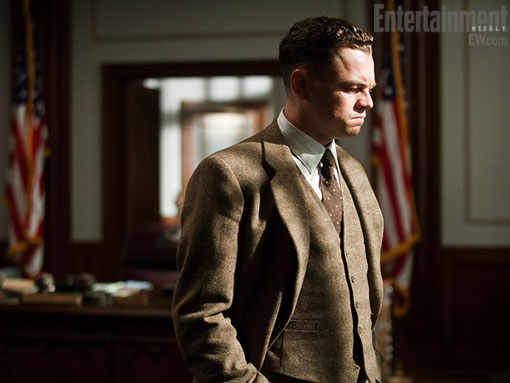 New Images From Biopics ‘J.Edgar,’ ‘The Iron Lady’ and ‘My Week With Marilyn’ We’re almost done with the round-up of images from the latest issue of Entertainment Weekly. This batch sees new looks at a round of awards-heavy biopics. Before we get to scans, EW has unveiled new official images on their site of Clint Eastwood’s J. Edgar, have we provided the first picture last night. They feature Leonardo DiCaprio as our lead J. Edgar Hoover and you can see those images above and below, but check out the site for an in-depth article. Written by Milk Oscar-winner Dustin Lance Black the drama also stars Naomi Watts, Judi Dench, Armie Hammer, Josh Lucas, and Ken Howard. “J. Edgar” explores the public and private life of one of the most powerful, controversial and enigmatic figures of the 20th century. As the face of law enforcement in America for almost fifty years, J. Edgar Hoover (DiCaprio) was feared and admired, reviled and revered. But behind closed doors, he held secrets that would have destroyed his image, his career and his life. The film follows Redmayne as Colin Clark, an assistant on the set of Monroe’s The Prince and the Showgirl, in which she starred with Sir Laurence Olivier (played by Branagh). It is based on a previously missing diary from Clark, in which he escorted the star on a week-long getaway.

Last up, there is a new image of Meryl Streep as Margaret Thatcher in Phyllida Lloyd‘s upcoming biopic. It looks more or less like the rest we’ve seen. Jim Broadbent also stars in film, oddly scored by Clint Mansell. You can hear him in the teaser and check out the image below. Which biopic are you most anticipating?