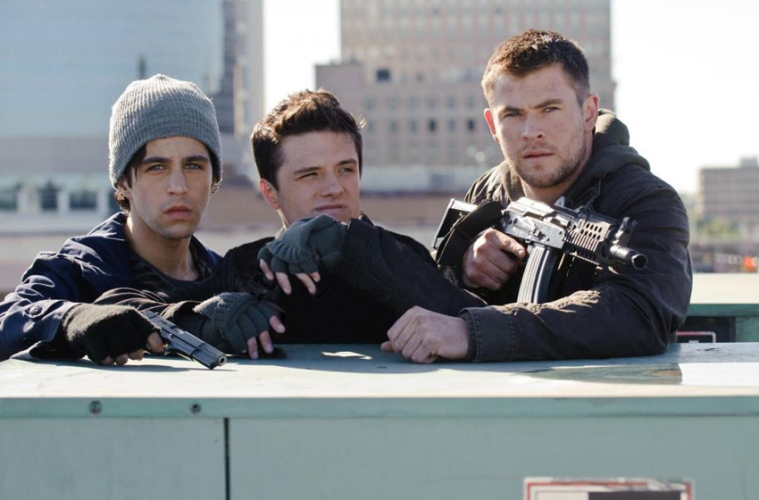 If one can get through the annoying Entertainment Tonight voiceover and on-screen logo, we’ve got a decent first look at the upcoming Red Dawn remake. I’m certain an official teaser is just around the corner, but this one-minute look provides most of the information to let you know if this could be a worthy update. Unfortunately, I’m wavering more towards the negative side, with some shoddy CG (in an invasion scene that somehow looked better in the 1984 original) and a general plain aesthetic to the production design and cinematography. Thankfully the cast is strong in Dan Bradley’s update, with the charming Chris Hemsworth and  up-and-coming stars Josh Hutcherson (The Hunger Games) and The Wackness‘ Josh Peck filling out roles originally held by Charlie Sheen, Patrick Swayze, and C. Thomas Howell. Check out the look below and we’ll update when the official one lands.

Update: See the official trailer below.

In RED DAWN, a city in Washington state awakens to the surreal sight of foreign paratroopers dropping from the sky – shockingly, the U.S. has been invaded and their hometown is the initial target. Quickly and without warning, the citizens find themselves prisoners and their town under enemy occupation. Determined to fight back, a group of young patriots seek refuge in the surrounding woods, training and reorganizing themselves into a guerilla group of fighters. Taking inspiration from their high school mascot, they call themselves the Wolverines, banding together to protect one another, liberate their town from its captors, and take back their freedom.