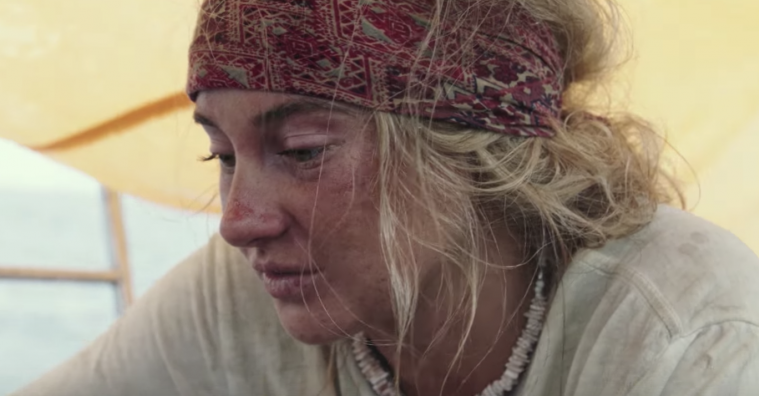 All is Lost for Shailene Woodley in First Trailer for ‘Adrift’

In what is unfortunately based on true events and not just Open Water 2, Shailene Woodley’s latest role sets her out to sea. Director Baltasar Kormakur (2 Guns, Everest) is looking to get into the harrowing romance business as he will tell the tale of hurricane-crossed lovers stranded in the ocean in the upcoming Adrift.

Co-starring Sam Claflin as Woodley’s busted up beau, the film appears to mostly be centered on the couple’s would-be doomed voyage directly into a category 5 hurricane–which the trailer notes was “the largest storm in the Pacific.” (Citation needed.) Getting her own All is Lost, Woodley must rescue her lover from certain death and somehow keep him alive, all while stranded alone at sea. The trailer depicts all of this in relatively short order with a typically triumphant score placed underneath for good measure.

Starring Shailene Woodley (Fault in Our Stars, Divergent films) and Sam Claflin (Me Before You, The Hunger Games films), ADRIFT is based on the inspiring true story of two free spirits whose chance encounter leads them first to love, and then to the adventure of a lifetime. As the two avid sailors set out on a journey across the ocean, Tami Oldham (Woodley) and Richard Sharp (Claflin) couldn’t anticipate they would be sailing directly into one of the most catastrophic hurricanes in recorded history. In the aftermath of the storm, Tami awakens to find Richard badly injured and their boat in ruins. With no hope for rescue, Tami must find the strength and determination to save herself and the only man she has ever loved. ADRIFT is the unforgettable story about the resilience of the human spirit and the transcendent power of love.