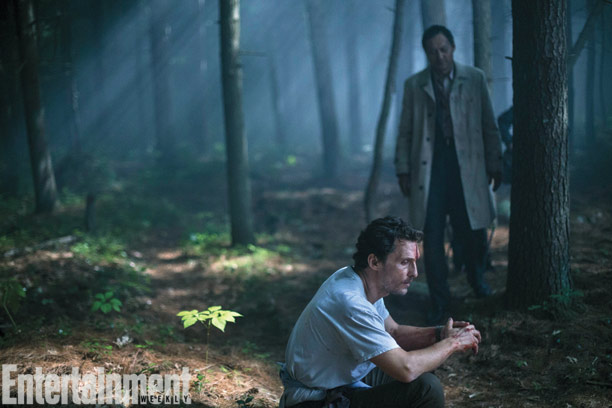 After just a few years of quality projects, Matthew McConaughey‘s name alone will now get us intrigued when it comes to a film. Thankfully, however, there’s usually a few other factors that go with his choices. Ahead of the release of Interstellar, the actor is currently shooting his next feature, The Sea of Trees, coming from director Gus Van Sant. The first image has now arrived today for the film that follows the actor as Arthur, a man who treks through the forests of Mount Fuji looking for answers to life.

“They are very different projects and characters yet they are both poetic,” McConaughey tells EW, comparing it to True Detective. “I say another title for this film is ‘You’ve got to go through annihilation to get to salvation’. It’s one hell of a survival story.” Also starring Ken Watanabe (in the photo below) and Naomi Watts, McConaughey added, “Everyone is going to leave the theater and have their own walk and talk through the parking lot to muse about its meanings, what it was about and what it wasn’t, what was real and what was a dream.” Check out the official synopsis and photo below for the highly-anticipated drama.

Arthur Brennan (McConaughey) treks into Aokigahara, known as the Sea of Trees, a mysterious dense forest at the base of Japan’s Mount Fuji where people go to contemplate life and death. Having found the perfect place to die, Arthur encounters Takumi Nakamura (Watanabe), a Japanese man who has also lost his way. The two men begin a journey of reflection and survival, which affirms Arthur’s will to live and reconnects him to his love with his wife (Watts). The Sea of Trees is expected to be released next year.