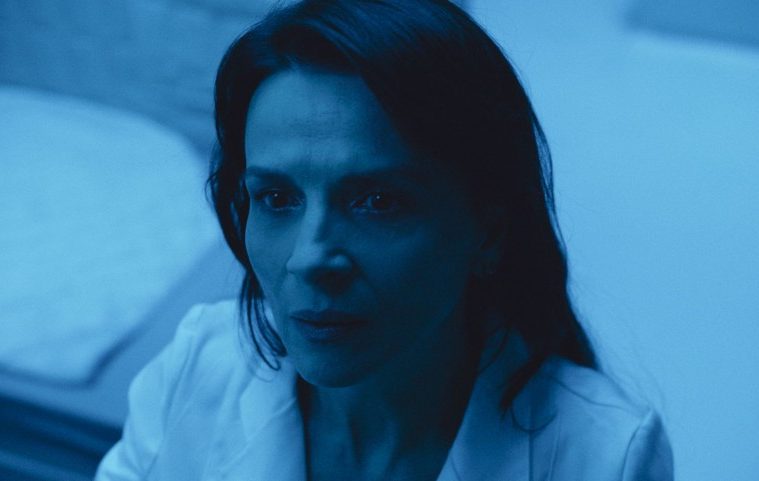 That emotional profundity most directors try to build to across an entire film? Mike Mills achieves it in every scene of 20th Century Women. There’s such a debilitating warmness to both the vibrant aesthetic and construction of its dynamic characters as Mills quickly soothes one into his story that you’re all the more caught off-guard as the flurry of emotional wallops are presented. Without ever hitting a tonal misstep, Mills’ latest feature takes place in a short period of time within relatively few locations, yet seems to pick up every wavelength of the human experience. There are also few funnier scenes in recent years than Billy Crudup’s William attempting to explain the ending of a certain classic. – Jordan R.

3 Faces is the fourth film Jafar Panahi has made in defiance of a 20-year filmmaking ban the Iranian government issued against him in 2010. The first three were all small-scale affairs, shot solo or with tiny crews, in which the camera never left the confines of a given space – Panahi’s apartment building in This Is Not a Film (2011), a holiday house in Closed Curtain (2013), and a taxi in Taxi (2015). His newest, which sees him working with a larger team, is almost entirely set in a remote village in the mountains, likely in Iranian Azerbaijan. This shift is in keeping with the thematic trajectory drawn by this series of clandestine films. While the first one focused on Panahi’s own predicament, each new installment has expanded the scope of his critique, encompassing further facets of the oppression engendered by the authoritarian values that hold sway over large parts of Iranian society. – Giovanni M.C. (full review)

Paul Thomas Anderson’s collaborative streak with the Radiohead crew continues in imaginative form with Anima. The self-described “one-reeler” takes us on an Orwellian journey with Thom Yorke’s Keaton-esque character as three songs from his new album serve as a backdrop in a search for place and meaning in a rigid world. I count myself lucky to have experienced Darius Khondji’s gorgeous cinematography on an IMAX screen, but now everyone can take a look on Netflix. – Jordan R.

While it didn’t make a cultural mark akin to Spring Breakers, Harmony Korine’s latest feature is one of his best films. 95 minutes of lovable, shaggy bliss, it’s wonderfully free of stakes with a tone so earnest that it never feels tedious. Yes, Moondog is a role Matthew McConaughey was born to play, but his wayward, hazy journey is also supported by a hilarious cast, from Martin Lawrence’s (worst) tour guide (ever) Captain Wack to Zac Efron’s Creed-obsessed rehab escapee Flicker to Isla Fisher’s care-free Minnie, the wife of Moondog, who receives pleasure any way she wants it. This may be Korine doing his version of dad rock, but he’s locked into a loose inner spirituality that the current state of American independent cinema could certainly use more of.  – Jordan R.

Set in a dry, dystopian future where a half gallon of clean water goes for $12, Julia Hart’s Fast Color is a superhero origin story about a unique family on the run that has come to back to the safest place: home. Gugu Mbatha-Raw stars as Ruth, a former drug addict who now makes ends meet doing dishes at various places in exchange for a meal. She left behind mother Bo (Lorraine Toussaint) and daughter Lila (Saniyya Sidney), outrunning a scientist named Bill (Christopher Denham), who hopes to study Ruth in a government lab. – John F. (full review)

While High Life has understandably drawn all kinds of comparisons to the 60s and 70s cerebral sci-fi canon (notably Solaris and 2001: A Space Odyssey), for both its abstract use of space imagery and its minimalist ship design which more often than not resembles an artificially-lit hospital filled with dated technology, its soul is firmly in the sensibilities of its filmmaker, French master Claire Denis, who mines the genre for a deeply sensorial and moving portrait of the misery and horror parents are willing and perhaps responsible to endure so their children might not have to. – Josh L. (full review)

There’s a strange, unspoken melancholy that hangs over the otherwise loose and endearing The Old Man & the Gun, a collective acknowledgement of the passage of time inherent in seeing an aged Robert Redford passing through a convincingly rendered aesthetic we familiarize with the actor’s younger self. It’s a simple (if a touch cloying) conceit on the part of writer/director David Lowery—whose previous two outings include the wonderfully economical and sensitive Pete’s Dragon, also starring Redford, and the intimately ambitious A Ghost Story. However, it fits perfectly within Lowery’s sensibilities as one of the more broadly generous, unassuming filmmakers we currently have. – Josh L. (full review)

Martin Scorsese has had a long, fruitful partnership with rock ’n’ roll as muse, subject, and accompaniment, and one thing at which he’s uniquely skilled is drawing out the playfully antagonistic relationship between performer and audience. Though 2005’s No Direction Home offered an exhaustive, four-hour look at a sliver of Bob Dylan’s career, it felt almost too civil–absent the combative spirit that has made Dylan such a prophetic and transmuting figure.  His latest attempt, Rolling Thunder Revue: A Bob Dylan Story–a remastered chronicle of the nearly 60-date tour that took place from 1975-1976–is as indebted to Dylan in form as content. A grandiose lark at least ten years in the making, its opening as a stirring Americana collage belies its later, consciously scattered direction. This is a portrayal of Dylan at his most unadulterated and prickly–a desolate genius who’s still almost always full of it. – Michael S. (full review)

Everything about this new–and markedly different–Spider-Man feels like a revelation, but in particular, it is the visuals; uniquely comic-book inspired while also leaving behind that medium completely, they get the rare recommendation of even seeking out the 3D version. Is it another Spider-Man origin story? Sure, but it knows this is a yawn-inducing trope and plays with those conventions while also giving us a person of color under the mask. The influences are worn on its sleeve–or in this case, a hoodie–with the Swae Lee and Post Malone jam Sunflower featuring prominently and a Spider-Man that opts for Jordans on his feet. This is a rare film that is able to blend bombastic action, laugh-out-loud humor, a smirking knowing meta-commentary on the genre, and some strong emotional beats all in one ecstatically entertaining package. – Bill G.

This Sunday, the Brooklyn-based multimedia publishing outlet Exmilitary concludes The Eastern European Apocalypse, a free, month-long streaming project dedicated to, per co-founder Leo Zausen, “four films that are largely unknown to the English-speaking world and derive from the Cold War’s looming threat of nuclear disaster and its aftermath: the destruction of the world.” Capping off a run that’s included Andrzej Żuławski’s On the Silver Globe, Piotr Szulkin’s O-bi, O-ba, The End of Civilization, and Konstantin Lopushanskiy’s Letters from a Dead Man is Andrei Tarkovsky’s Stalker, about which there is both little new to say and plenty left to discover.

Where to Stream: Exmilitary

A Star Is Born (Bradley Cooper)

Everyone loves the first, big stage performance of “Shallow,” but A Star is Born is great because of an empty parking lot. Away from the screaming adoration of fans, Ally (Lady Gaga) and Jackson (Bradley Cooper) found themselves in one another through the construction of a song. The first stanza is for him: “Tell me something, boy. Are you tired trying to fill that void?” Ally pulls it out of thin air, hearing about Jackson’s past, before singing his soul back to him. He’s touched, but then she puts herself into the song with a chorus she’d been working on that would become the backbone of “Shallow.” The two are tied together in the impromptu construction — not only of their song, but their love. As this doomed story continues, Ally and Jackson may not last, but their love does: in this song, in this image of their isolation from the rest of the world that might as well be the entire film. You never know when you’re living in a perfect moment — something that will become memory or fable. Most of us take a picture to preserve a feeling. Ally sang “Shallow.” – Willow M.

“Let’s see what’s behind this.” That’s the very first line we hear in Sunset, László Nemes’ masterful follow-up to his 2015 breakout Son of Saul, a daring debut that followed the trials of a Sonderkommando member at Auschwitz-Birkenau. The pointed phrase is spoken by the host of a world-famous Budapestian millinery shop during the dying days of the Austro-Hungarian empire. You may think that all sounds about as far away as one can get from the infamous Nazi death camp, yet Sunset somehow proves to be no less nerve-shredding a descent into hell for its lead character, and like Saul it is another film during which the frightening rumble of war can be heard in the not-so-distant background. – Rory O. (full review)

The Belladonna of Sadness
The Love Witch (review)

The Hate U Give
Los Silencios

Elvis: Strung Out
Murder!
Blackmail
Like Someone In Love
A Lullaby to the Sorrowful Mystery
China Not China
Zombies
The Lair of the White Worm
Moses and Aaron
Che
Beyond the Hills
War Witch
The White Storm
In Praise of Nothing
Imbued Life
Syndrome IO
Mutual Appreciation