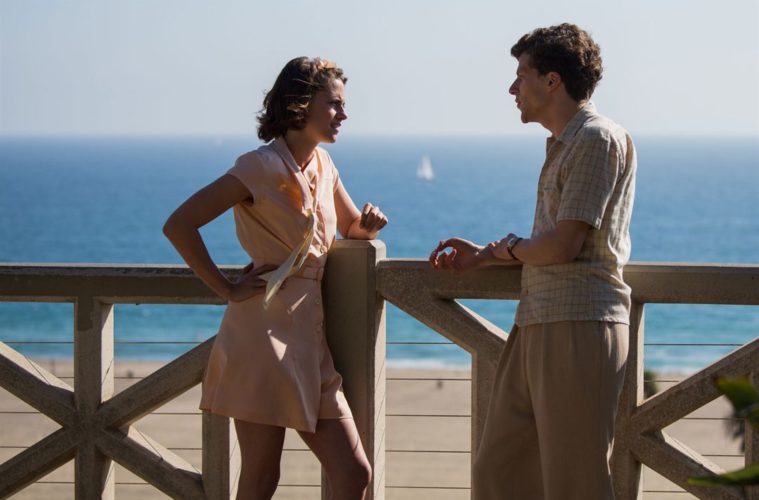 As the rumors swirl when it comes to the line-up for the 69th Cannes Film Festival, today brings confirmation of one specific title. The festival announced today that Woody Allen‘s latest feature Café Society — which Amazon Studios is expected to release this summer — will open the event as an out-of-competition title, marking the third time one of his films has done so.

Led by Kristen Stewart (who we expect to also show up with Olivier Assayas‘ Personal Shopper) and Jesse Eisenberg, the announcement also comes with an official logline (following last week’s details from cinematographer Vittorio Storaro) and the first still, seen above. Check out the press release below in full and return for our review.

The 69th Festival International du Film de Cannes will launch with a screening of Woody Allen’s new film, Café Society, on Wednesday 11 May in the Palais des Festivals’s Grand Théâtre Lumière as an Official Selection Out of Competition title. It’s a record-breaking coup for the New York director who has already opened the Festival twice, in 2002 with Hollywood Ending, and again in 2011 with Midnight in Paris.

The film tells the story of a young man who arrives in Hollywood during the 1930s hoping to work in the film industry, falls in love, and finds himself swept up in the vibrant café society that defined the spirit of the age.

Café Society features two rising stars from Hollywood’s up-and-coming generation, Kristen Stewart and Jesse Eisenberg alongside a stellar cast of acclaimed actors including Blake Lively, Parker Posey and Steve Carell. Stewart climbed the Red Carpet Steps at Cannes in 2012 for On the Road by Walter Salles and then in 2014 for Olivier Assayas’s Clouds of Sils Maria, which earned her a César. Jesse Eisenberg starred in Louder than Bombs by Joachim Trier, In Competition last year.

Woody Allen also joined forces with Vittorio Storaro for the film. The eminent director of photography was a member of the Feature Film jury in 1991 and is a three-time Oscar winner for Apocalypse Now by Francis Ford Coppola in 1980, Reds by Warren Beatty in 1982, and The Last Emperor by Bernardo Bertolucci in 1988.

From Manhattan in 1979 to Irrational Man in 2015, this will be the fourteenth Out of Competition selection at Cannes for the American director, screenwriter, actor, writer and comedian. Woody Allen was born in New York on 1 December 1935 into a Jewish family of Russian-Austrian descent. A prolific film-maker for the past forty years, directing virtually a film a year since the 1970s, he is also a jazz clarinettist. His career in film began in 1965 with What’s New Pussycat? which he both wrote and acted in. Then came his directorial debut – What’s Up Tiger Lily? – in 1966. He soon began to star in his own films, going on to win four Oscars (for Annie Hall in 1978, Hannah and Her Sisters in 1987 and Midnight in Paris in 2012). He has been nominated twenty times for the famous award, which he has never turned up to collect. Manhattan, Match Point, Take the Money and Run, Vicky Cristina Barcelona, The Purple Rose of Cairo and Deconstructing Harry number among his other successes.

Café Society was produced by Letty Aronson (Gravier Productions), Stephen Tenenbaum and Edward Walson, as a co-production with Helen Robin (Perdido Productions). Executive producers were Ronald L. Chez, Adam B. Stern and Marc I. Stern. The film was sold by FilmNation Entertainment and distributed on French territory by Mars Films.

In France, its release in cinemas is scheduled to coincide with the official opening of the Festival de Cannes on Wednesday 11 May, 2016.

The opening ceremony, hosted by Laurent Lafitte, will be broadcast by Canal +.

The 69th Festival International du Film de Cannes will take place between 11 and 22 May, 2016. The Competition Jury will be presided over by George Miller, and the Official Selection titles are due to be announced on 14 April.