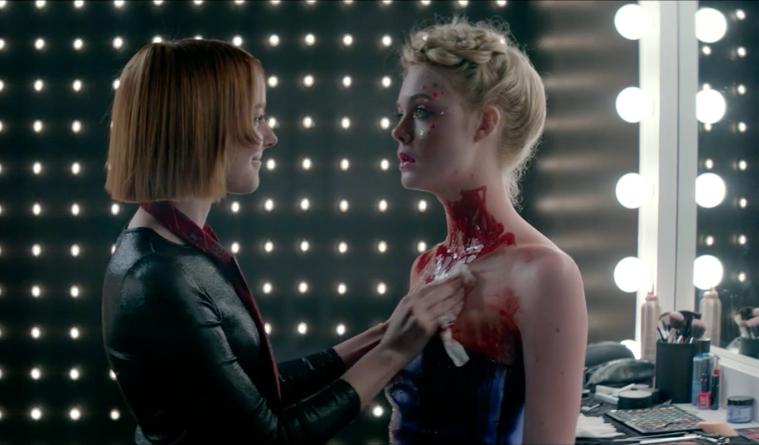 By our accounts, it’s been a pretty fantastic Cannes Film Festival thus far and there’s still a good number of highly-anticipated features left to premiere. One we’re quite curious about is Nicolas Winding Refn‘s next feature The Neon Demon, which stars Elle Fanning, Keanu Reeves, Christina Hendricks, Jena Malone, Abbey Lee, and Bela Heathcoate. Set for a premiere in two days, the horror-thriller follows an aspiring model who moves to Los Angeles where her youth and vitality are devoured by a group of beauty-obsessed women who will go to any lengths to get what she has. Ahead of the premiere, the first trio of clips have now landed.

I really believe there is a 16-year-old girl inside of every man, and I wanted to make The Neon Demon about the 16-year-old girl inside of me,” the directors tells THR. “And that is what got me obsessive moving towards to wanting to make this film. And there were some practicalities involved, like my wife would only move to L.A.. So I had to figure out a story set in L.A. I had done some really endurable fashion campaigns, so I was very interested in that world. And actually I’ve been trying to make a horror film for many years and had written down many ideas. I took them out and I could see a pattern that I could use. And that became The Neon Demon. In the end I wanted to make a teenage horror film.”

He also talks about his biggest influence, saying, “When I was making The Neon Demon, I was listening to a lot of [pioneering disco producer] Giorgio Moroder. I think that was the biggest influence. His late 1970s, early ’80s work … he was very inventive in that period, had a certain beat. That late ’70s disco beat that started to get electronic. I think I played him 24 hours a day, driving everyone completely insane. But it was a great inspiration.”

The director also talked about diving into the “cinematic language” of horror on the eve of The Neon Demon. He tells Variety, “It Follows was to me a very smart, sophisticated intelligent film. Like great horror, it’s all metaphor. It Follows is about angst over teenage sexuality.” Can we expect something similar with his latest? We’ll find out soon, but for now, check out the clips below, along with new stills and posters.

Update: See a fourth clip below.