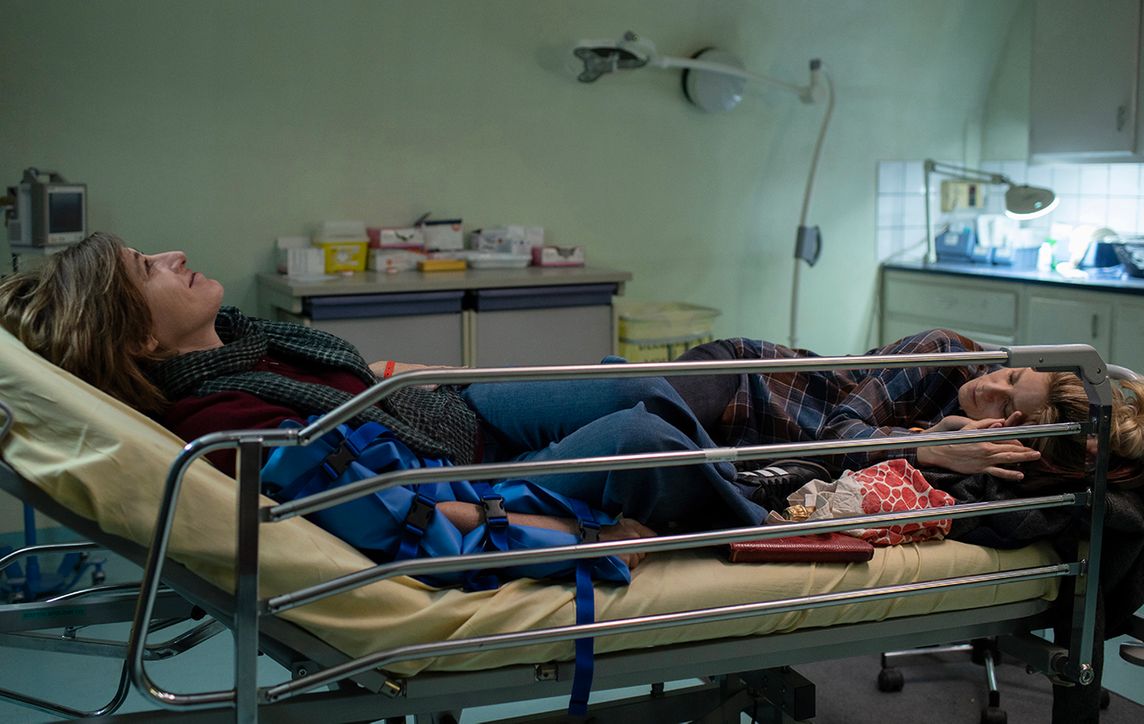 Anybody who thinks writers who use subtext are cowards will find plenty to admire in The Divide. Taking place over the course of one night, Catherine Corsini’s film charts the messy disintegration of a relationship amidst an overcrowded hospital emergency room, where staff are struggling to tend to the needs of the growing number of patients. If this sounds too subtle as a state-of-the-nation address, fear not––Corsini doesn’t want to leave anything even slightly ambiguous. This narrative is complemented by an overt political commentary consisting almost entirely of shouting matches between social classes (mostly arguments about Emmanuel Macron and Marine Le Pen), and is set at the height of the 2018 Yellow Jackets protests, with clashes between police and protesters moving ever closer to hospital grounds.

Even those with the slightest knowledge of recent French history may find themselves rolling their eyes at the glaringly obvious points The Divide is trying to make. As a commentary on an, indeed, divided France it can’t help feeling outdated. (It was shot during COVID but defined entirely by events that were merely a precursor to a pandemic that highlighted greater social divides throughout the world.) It’s a film that arrives long after the moment it could have made its greatest impact, its on-the-nose satire losing some of its sting now that the events within define a period that has long since passed. Corsini may use heavy-handed metaphors to show that some wounds are still yet to heal, but The Divide can’t help feeling irrelevant in total—a supposedly urgent black comedy that arrives looking more like a period piece.

Raf (Valeria Bruni Tedeschi) and Julie (Marina Foïs) are on the verge of finally breaking up. Julie plans to move out while Raf merely wants to continue escalating tensions between the pair, spending entire evenings sending her partner endless melodramatic texts. When Raf breaks her elbow she’s taken to an understaffed, overpopulated emergency room waiting for an X-ray that will never materialize. Many of the staff are on strike, while the growing number of patients wounded from yellow vests protests are making it near impossible for those who are on shift to determine who should be treated first.

Into this chaos arrives Yann (Pio Marmaï), a trucker whose leg was damaged when he attended the protests. He urgently needs to be seen so he can go back to work the next day but spends most of his time in the waiting room coming into conflict with Raf, a middle-class liberal who mistakenly assumes all (predominantly working-class) protesters have far-right sympathies. Julie arrives to look after her soon-to-be separated partner, tension between them remaining at a high as the Kafkaesque waiting game to get checked up by a doctor continues all through the night.

The only aspect of The Divide that feels painfully relevant is the stifling hospital setting, an emergency room filled to capacity and monitored by a dwindling staff—a sight familiar to anybody who has needed to attend a hospital in the past 18 months. While it sounds very regionally specific on paper, with healthcare workers very frequently striking over poor pay conditions in the country, it also feels like an accurate depiction of being a healthcare worker during a pandemic. The nurses on shift are the most easily empathetic characters herein (Corsini predominantly cast non-professional actors who have worked in hospitals for these roles), the abuse they receive being the only time the consistent shouting matches between characters feels as uncomfortable as it should. Her satirical aims may have not registered were we to spend more time with the few characters in the ensemble who aren’t obnoxious, but it would have been an infinitely more rewarding perspective on this crisis.

As with other turns of her drama, the director, working alongside screenwriters Agnès Feuvre and Laurette Polmanss, seems to think this commentary was too subtle. In what might be the most dunderheaded moment of a project defined by such moments, part of the ceiling falls and shatters next to Yann, leaving another patient to deliver the line “the healthcare system is collapsing.” Satire so heavy-handed as to become a hysterical parody of itself.

The Divide was the surprise winner of this year’s Queer Palm, beating several more lauded and overtly transgressive contenders, including the year’s overall Palme d’Or winner Titane. In a way it proves to be a more adventurous pick than films directly grappling with issues of sexuality, dramatizing two very familiar queer archetypes seldom depicted onscreen: the middle-class, right-wing-adjacent gays who can’t imagine for a second they hold bigoted beliefs because they’re gay themselves. In concept this is why placing Raf in an emergency room—one very laboriously designed to represent wider French society and the divides therein—is a winning satirical idea. In practice, despite the melodramatic joys of Valeria Bruni Tedeschi’s performance, it proves somewhat one-note, its tensions always reverting back to binary arguments regarding France’s 2017 Presidential election.

The idea of a deteriorating queer relationship during a time of social upheaval will likely draw some surface-level comparisons to Wong Kar-wai’s Happy Together, set during a moment of tension for Hong Kong’s gay community and the country as a whole, as the territory was handed back to China from British rule. Of course, that was a film much more adept at weaving together the political and the personal; in The Divide, everybody is knowingly designed as a caricature, and its political ideas feel all the more shallow for it.

The Divide played in competition at the Cannes Film Festival.