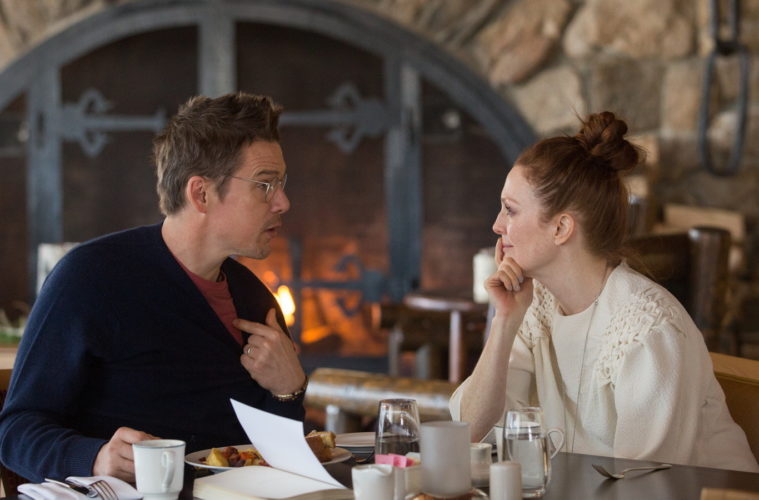 After hitting a variety of major film festivals over the last six months or so (including Toronto, Sundance, New York, and Berlin), Maggie’s Plan, the latest feature from Rebecca Miller (The Ballad of Jack and Rose, The Private Lives of Pippa Lee), will arrive this summer. Starring Greta Gerwig, Ethan Hawke, Julianne Moore, Bill Hader and Maya Rudolph, it follows a thirty-something whose plans for motherhood change when she meets a married man.

Screening to mostly agreeable reviews, The Guardian‘s Nigel M. Smith said, “Writer/director Rebecca Miller’s film is tonally the complete opposite of its lead – true to life, it’s unpredictable and a bit of a mess. And that’s what makes Maggie’s Plan such a delight.” The first trailer has now arrived ahead of a May release and one can check it out below, along with the poster.

In Rebecca Miller’s witty modern romantic comedy MAGGIE’S PLAN, Greta Gerwig portrays Maggie Hardin, a vibrant and practical thirty-something New Yorker working in education, who without success in finding love, decides now is the time to have a child on her own. But when she meets John Harding (Ethan Hawke), an anthropology professor and struggling novelist, Maggie falls in love for the first time, and adjusts her plans for motherhood. Complicating matters, John is in an unhappy marriage with Georgette Harding (Julianne Moore), an ambitious academic who is driven by her work. With some help from Maggie’s eccentric and hilarious best friends, married couple Tony (Bill Hader) and Felicia (Maya Rudolph), Maggie sets in motion a new plan that intertwines their lives and connects them in surprising and humorous ways. Maggie learns that sometimes destiny should be left to its own devices. MAGGIE’S PLAN is a sweet, sophisticated and funny exploration of the unexpected complexities of modern romance, mixing heart and humor in a story of the delightful variability of relationships over the course of time.

Maggie’s Plan opens on May 20th.