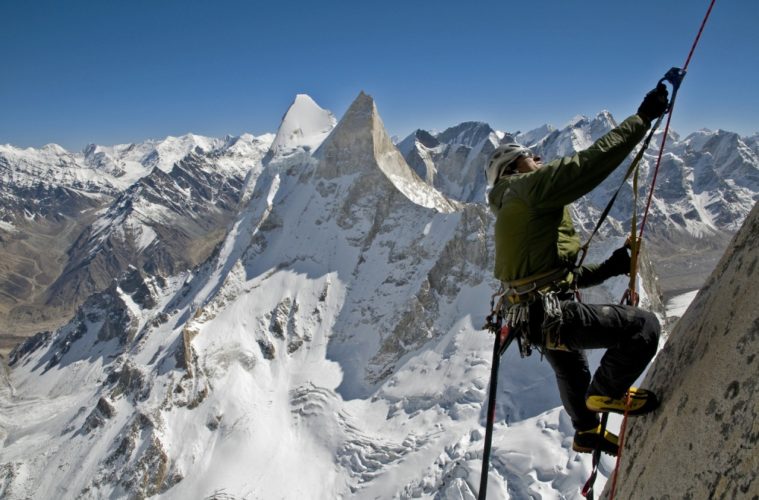 If the big-budget thrills of this fall’s Everest aren’t realistic enough for your tests, next month comes a new documentary that will certainly give one vertigo. Meru, which picked up the U.S. Documentary Audience Award at the Sundance Film Festival earlier this year, follows a trio of mountain climbers who attempted to scale the most challenging mountain in the world.

Directed by Jimmy Chin and E. Chai Vasarhelyi, Music Box Films have now released the first trailer for the film, which takes a first-person account of the events. Coupled with talking head interviews, we’d be intrigued to see if they distract from the visceral thrills that the imagery brings, but nonetheless, it looks like a must-see on the big screen. Featuring Conrad Anker, Jimmy Chin, Renan Ozturk, Jon Krakauer, Jeremy Jones, and Jenni Lowe-Anker, check out the trailer and poster below.

In the high-stakes pursuit of big-wall climbing, the Shark’s Fin on Mount Meru may be the ultimate prize. Sitting 21,000 feet above the sacred Ganges River in Northern India, the mountain’s perversely stacked obstacles make it both a nightmare and an irresistible calling for some of the world’s toughest climbers. In October 2008, renowned alpinists Conrad Anker, Jimmy Chin and Renan Ozturk arrived in India to tackle Meru. Their planned seven-day trip quickly declined into a 20-day odyssey in sub-zero temperatures with depleting food rations. Despite making it to within 100 meters of the elusive summit, their journey, like everyone before them, was not a successful one. Heartbroken and defeated, the trio returned to their everyday lives, where the siren song of Meru continued to beckon. By September 2011, Anker had convinced his two lifelong friends to undertake the Shark’s Fin once more, under even more extraordinary circumstances than their first attempt. MERU is the story of that journey, an expedition through nature’s harshest elements and one’s complicated inner demons, and ultimately on to impossible new heights.