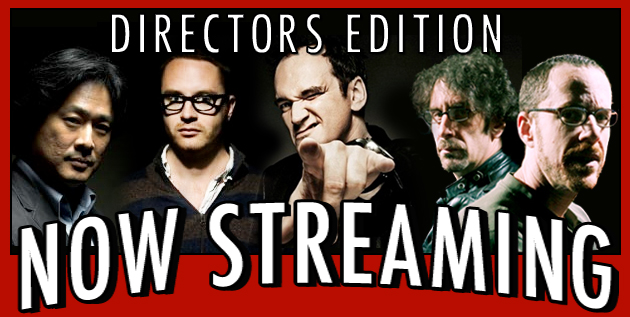 Each week within this column we strive to pair the latest in theatrical releases to worthwhile titles currently available on Netflix Instant Watch. But this week, we pay tribute to the thoroughly thriller filmmakers whose next efforts are among our Most Anticipated Films of 2012!

From some of Tarantino’s early offerings, to the best of the Coen Brothers, to the genre experiments of Chan-wook, and the emerging talent of Winding Refn, we’ve got you covered with some seriously striking movies now available online.

Pictured below in his cameo role in the East meets West action-flick Sukiyaki Western Django—the ever-edgy American auter will take on a new brand of revenge narrative in 2012 with Django Unchained. Jamie Foxx stars as a slave-turned-bounty hunter on a bloody quest to save his wife from a menacing slave owner. Leonardo DiCaprio, Christopher Waltz, and Sacha Baron Cohen co-star. Four Rooms (1995) Reservoir Dogs‘ star Tim Roth stars as a bellboy besieged by problems in this outrageous comedy crafted by Tarantino, Robert Rodriguez, Allison Anders and Alexandre Rockwell. Each director helms one chapter of Roth’s journey, and in typical Tarantino style, he not only directs the segment “The Man From Hollywood” but also co-stars alongside a grizzled and hilarious Bruce Willis.

Jackie Brown (1997) Pam Grier stars in Tarantino’s homage to Blaxploitation, playing a role reminiscent of those she portrayed in her heyday. Jackie Brown is a flight attendant who earns a nice sideline using her unsuspected luggage to smuggle dirty money. But when the authorities catch on to her criminal moonlighting, she’ll have to think fast to get out clean…and with the cash. Samuel L. Jackson and Robert De Niro co-star. The Big Lebowski (1998) This Coen Brother cult classic follows Jeff “the Dude” Lebowski (Jeff Bridges) on a quest to get back his stolen carpet in an adventure that throws him into a bizarre realm of pontificating cowboys, ferret-loving nihilists, and a sexually adventurous heiress. John Goodman, Steve Buscemi and Julianne Moore co-star.

The Man Who Wasn’t There (2001) The Coens take on film-noir with this black-and-white blackmail tale. Billy Bob Thorton stars as a disgruntled barber who believes his wife’s infidelity may be the key to a new life. But you know what they say about best-laid plans…Frances McDormand and James Gandolfini co-star.

True Grit  (2010) As ardent and open admirers of Hollywood’s Golden Era, Ethan and Joel finally took on the western genre with this thrilling remake that reunited them with Big Lebowski star Jeff Bridges. Here, rather than playing a stoned out slacker, Bridges portrays a drunken, one-eyed gun for hire whose seeking out a merciless killer (Josh Brolin) while pestered by a precocious young cowgirl (Hailee Steinfeld) and a flashy and arrogant Texas Ranger (Matt Damon). Among a long-list of honors—including Oscar nods for The Coens, Steinfeld, and Bridges—True Grit also earned a spot on my 2010 Top 10.

South Korean filmmaker Chan Wook Park, who drew notice with his bloody vengeance trilogy, descends into outright horror in his first American effort, Stoker. Mia Wasikowska stars as a teen girl who in the midst of mourning her father must face down an unexpected threat when her estranged uncle (Matthew Goode) pays a visit. Nicole Kidman and Dermot Mulroney co-star. Lady Vengeance (2005) The final film of Park’s vengeance trilogy may not be as well-known as its predecessor Oldboy, but with a distinct and twisted tale of maternal revenge, it’s long been my favorite. Lee Geum-ja (Yeong-ae Lee) has just served 13 years in prison for a crime she didn’t commit. Robbed of a life in which she could peacefully raise her daughter, she tirelessly hunts down the man responsible to exact one of the most brutal yet satisfying revenge scenarios ever captured on film.

I’m a Cyborg, but That’s Ok (2006) Park offers a complete 180 with this whimsical romantic comedy. Su-jeong Lim stars as a young woman whose conviction that she is a combat cyborg has landed her in an insane asylum. While her health deteriorates as she rejects human necessities (you know, like food and water), love begins to bloom with a young man (Rain) who believes he possesses the power to steal people’s souls.

Thirst (2009) A vampire tale unlike any other, Kang-ho Song (The Host) stars as a priest whose transformed into a mythic blood sucker after an experimental medical procedure goes awry. Now, beyond the thirst for blood, he has a lust for life that tempts him to break his vows and pursue an affair with the wife of his long-time friend. It’s a dark tale of romance that’s hard to shake. Bronson (2008) Refn made waves in the U.K. with this brazen and bizarre biopic that reveals the shocking and true tale of Britain’s most notorious convict, Charles Bronson, a man who sees violence as the highest art form. A brawny Tom Hardy delivers a powerful and unhinged performance.

Valhalla Rising (2009) Danish leading man Mads Mikkelsen stars in this gritty Viking adventure. One-Eye was once a fearsome warrior, but broken down from years of slavery, his only wish is freedom. However, when his escape attempt lands him in a world plagued by vicious and invisible demons, One-Eye must rediscover the fighter inside to survive.

Pusher 3: I’m the Angel of Death (2005) The final film in Winding Refn’s Pusher trilogy centers on a less-than-average effort to balance family life and work. Zlatko Buric stars as a heroin dealer whose forced to track down an MIA shipment of drugs while planning a garish birthday celebration for his demanding daughter. But don’t expect some winsome life lesson, Winding Refn’s always had a flare for the dark side of human desire.