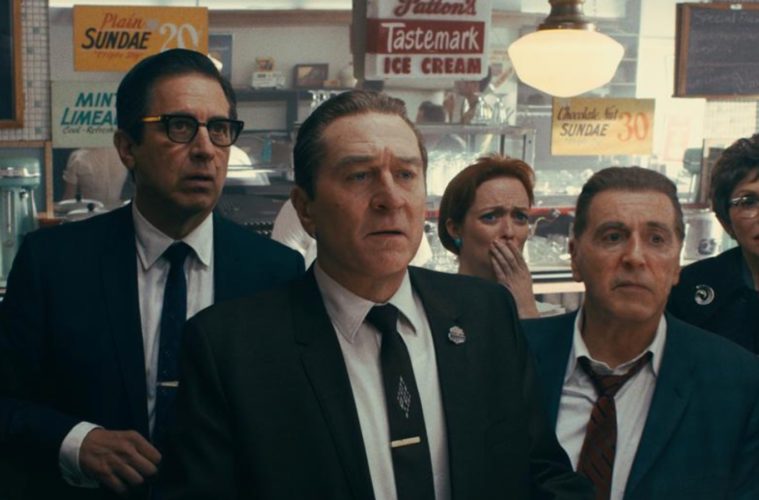 New Images from Martin Scorsese’s ‘The Irishman,’ Which Clocks in at 3.5 Hours

We are now in the month of the world premiere of the year’s most-anticipated film, Martin Scorsese’s The Irishman. Set to open the 57th New York Film Festival, the story of Jimmy Hoffa’s mysterious disappearance will then hit theaters on November 1 followed by a release on Netflix on November 27. One can also get ready for Scorsese’s longest narrative feature yet.

The festival revealed that the crime epic will run an expansive 210 minutes, though that 3.5-hour runtime is subject to change as post-production finalizes. Regardless, it sounds like the perfect length for the decades-spanning story featuring Robert De Niro as Frank Sheeran, Al Pacino as Jimmy Hoffa, as well as Joe Pesci, Harvey Keitel, Anna Paquin, Bobby Cannavale, and Ray Romano.

Following the trailer, Empire has now revealed a few more images and got details on the moment in 2015 that Scorsese and De Niro knew they were ready to embark on the production and extensive visual effects. Working with Industrial Light & Magic’s Pablo Helman, Scorsese and De Niro recreated the Christmas Party scene from Goodfellas as a test to see if the de-aging would work. First, watch the scene below:

“We made a little set that looked a little like the original film, and then Bob got going,” the director told Empire. “He did his monologues and soliloquies and different expressions. ‘Get rid of the fur coat! Get rid of the Cadillac!’ Then he went through a series of computer processes.” After some visual effects work and watching the de-aged version back to back with the Goodfellas scene, they had their answer. “We all decided this is going to work,” said Scorsese.

Check out the new images below, revealing the first look at Jesse Plemons’s mob associate Chuckie O’Brien, Jonathan Morris playing a priest speaking to an 8o-year-old Sheeran, and Stephen Graham as mobster Anthony ‘Tony Pro’ Provenzano. For more on The Irishman, check out Empire’s latest issue pick up the new Film Comment issue in which cinematographer Rodrigo Prieto explains his influences behind his visual approach.

The Irishman world premieres at NYFF, then hits theaters on November 1 and Netflix on November 27.