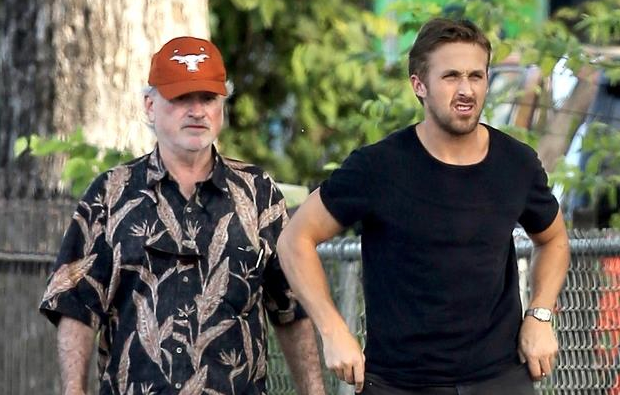 We picked up a few tweets late last night regarding the possibility of one of Hollywood’s finest actors joining the ever-growing ensemble of Terrence Malick‘s latest film, but wanted to hold off until the inevitable photographic evidence piled in — and like clockwork, indeed it has. Spotted on the set of his latest untitled film was none other than Michael Fassbender, who was seen shooting a scene alongside Ryan Gosling.

A user over at the IMDb boards gathered all the information a few hours ago, highlighting the below, blurry photo from a Fassbender fan Tumblr, as well as a tweet indicating that Fassbender popped on set after shooting some of Ridley Scott‘s The Counselor nearby. He has the title role in that film and last we heard it was shooting in the UK, but it looks like production has moved on location now, considering the drama takes place near the Texas border. Check out the photo from Malick’s set below.

Update: See photos of Fassbender with Portman below via Celebitchy and check out a new addition here. While Gosling, Rooney Mara, Natalie Portman, Cate Blanchett and Christian Bale will likely pop up in the film about “two intersecting love triangles” telling the “story of sexual obsession and betrayal set against the music scene in Austin, Texas,” there’s no telling if cameos from Fassbender or the recently spotted Holly Hunter will make the final cut. Regardless, one can definitely see Fassbender next year in both The Counselor and Steve McQueen‘s Twelve Years a Slave, as well as next to Portman again in Jane Got a Gun.