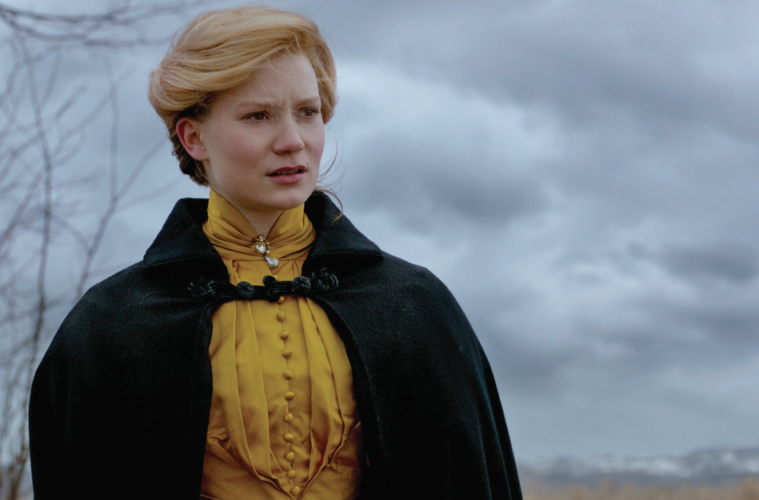 Following up his harrowing debut Eyes of My Mother, according to Variety, director Nicolas Pesce has just finished wrapping his new film Piercing with stars Mia Wasikowska and Christopher Abbott (James White). An adaptation of Ryu Mirakami’s novel, the film follows Abbott’s crazed protagonist who plans on murdering an unsuspecting call girl at a hotel. Unfortunately for him, he becomes allured by the mysterious woman who shows up (Wasikowska), which starts a dangerous game of chance and chase. Mirakami’s works are often dense and psychological, and it will be interesting to see how Pesce handles the material.

In more adaptation news, Léa Seydoux has joined Colin Firth and Matthias Schoenaerts in a film based on the book Kursk, which tells of the gripping real-life events of a Russian submarine disaster, according to Screen Daily. Helmed by director Thomas Vinterberg (The Hunt), Kursk is penned by Robert Rodal of Saving Private Ryan fame and follows an explosion of a submarine that caused a mad struggle for the lives of those on board. With the docu-buster taking off in the hands of Peter Burg and Mark Walhberg, it will be interesting to see how Vinterberg’s English-language film and foreign-language sensibilities mesh.

In other news, a slew of stars are set to join Jim Hosking‘s An Evening With Beverly Luff Lin. Thanks to Entertainment Weekly, we now know Aubrey Plaza, Emile Hirsch, Craig Robinson, Jemaine Clement, and Matt Berry are all attached to star. Apparently, the film follows a woman (Plaza, probably) whose, “unsatisfying marriage takes a fortunate turn for the worse when a mysterious man from her past comes to town to perform a mysterious event called ‘An Evening With Beverly Luff Linn; For One Magical Night Only.’”

Hosking’s previous film The Greasy Strangler is a wild ride of gross out gags and pitch-black humor, and The British Film Institute’s Mary Burke said in a statement that, “After the success of The Greasy Strangler, we are proud to continue to support Jim Hosking as a left-field, break-out British comedy talent.”

Lastly, Eva Green and Gemma Arterton are set for the romance film Vita & Virginia, Screen Daily reports. The sophomore film from Chanya Button (after Burn Burn Burn), Vita & Virginia follows the passionate affair between novelist Virginia Woolf (Green) and a socialite Vita Sackville-West (Arterton) amidst the flourish of the 1920s. Along with helming, Button also co-wrote the script with Eileen Atkins (her first writing credit, despite a multitude of acting gigs). The film is backed by Protagonist, whose CEO Mike Goodridge said the following,

“We just love this witty and evocative screenplay by Eileen Atkins and Chanya Button. This is a playful and sexual Virginia Woolf, far removed from the gloom often associated with her, and Vita Sackville-West is a vivacious and flamboyant character who dominates high society in London in the 1920s. Embodied by the glorious actresses Eva Green and Gemma Arterton and directed by the inspired Chanya, we believe Vita & Virginia will be warmly embraced around the world.”