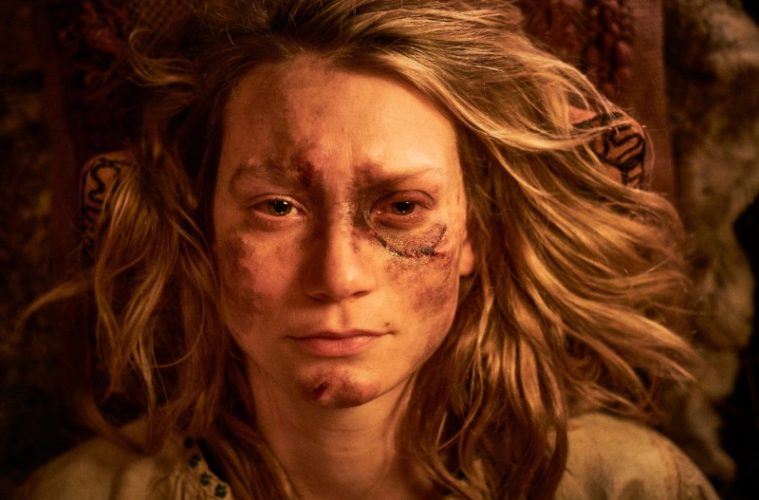 Mia Wasikowska’s latest outing, directed by Mirrah Foulkes in her feature debut, finds her smashing the patriarchy. The Sundance selection Judy & Punch tells a revenge plot set in the medieval era, which also happens to combine puppetry and vaudeville in a darkly humorous twist. Set to open in select theaters in the U.K. November 21st with an upcoming U.S. release still awaiting a date, the first trailer has now arrived.

The film conveys the story of Judy (Wasikowa), the brain’s behind the puppetry show that is the main attraction of the town of Seaside (nowhere near the sea), performed by her and her husband Punch (Damon Herriman, recently seen as Charles Manson in Once Upon a Time… in Hollywood and Mindhuter). Punch has described himself as “the greatest Puppeteer of his generation” to give a sense of how much of an egotistical character he is. When Punch enacts a mishap, Judy’s life is left ruined while he pushes the blame onto unfortunate scapegoats and leaves her to die out in the woods. What follows is an idiosyncratic revenge tale for Judy as she vows vengeance on her philandering bastard of a husband.

Jordan Raup wrote in his review, “If her most recent performances have proven anything, regardless of what era she might find herself in, Mia Wasikowska is fed up with the patriarchy. After outsmarting the male leads in last year’s Sundance premieres Piercing and Damsel, the actress heads to the medieval era in Judy & Punch, which serves up a heaping of darkly comedic Australian revenge. Putting a modern, live-action spin on this fable-esque puppet tale, director Mirrah Foulkes crafts a vibrant, brutal directorial debut, even if the ultimate catharsis leaves something to be desired.”

In the town of Seaside, nowhere near the sea, puppeteers Judy and Punch are trying to resurrect their marionette show. The show is a hit due to Judy’s superior puppeteering but Punch’s driving ambition lead to a tragedy that Judy must avenge.