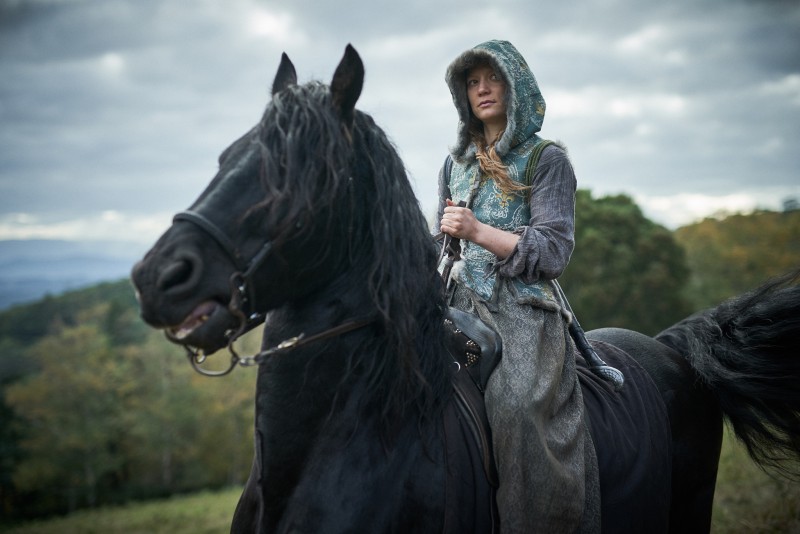 If her most recent performances have proven anything, regardless of what era she might find herself in, Mia Wasikowska is fed up with the patriarchy. After outsmarting the male leads in last year’s Sundance premieres Piercing and Damsel, the actress heads to the medieval era in Judy & Punch, which serves up a heaping of darkly comedic Australian revenge. Putting a modern, live-action spin on this fable-esque puppet tale, director Mirrah Foulkes crafts a vibrant, brutal directorial debut, even if the ultimate catharsis leaves something to be desired.

With opening typeface straight from The Witch, we’re introduced to the town of Seaside, which is nowhere near the sea. A marionette show from Punch (Damon Herriman), the self-proclaimed “greatest puppeteer of his generation,” and his wife Judy (Wasikowska), who is actually the brains behind the operation, is the town’s main attraction–at least when it’s not stoning day. This is the era where the law was determined by vindictive hearsay and so when a trio of women from the village had chickens die, got a rash, or stared at the moon too long, they are declared witches and put on the chopping block. The timid, good-natured new Constable, Derrick (Benedict Hardie), hopes to change that by enacting the due process of the law, something the rough-and-tumble denizens of the town simply won’t accept. Foulkes gets quite a bit of mileage out of repeating this particular joke about the primitively savage societal norms.

When one particularly bleak-as-hell mishap happens at the hands of Punch (played as a joke that I can’t believe they pulled off), it means Wasikowska’s life is ruined as she knows it. Beaten to a bloody pulp by her bastard husband, she’s left out in the woods to die as Punch blames his crimes on his innocent, frail elderly maid and her husband as he quickly convinces the town of their witchcraft. Taking its cues from the centuries-old Punch and Judy show, Wasikowska packs a fierceness in what will be a fitting calling card if Hollywood ends up rebooting Assassin’s Creed. Herriman plays Punch with a disgusting menace, which bodes well for his role as Charles Manson in Quentin Tarantino’s forthcoming Once Upon a Time in Hollywood.

Foulkes, who got her start acting in the particular brand of twisty, dark, witty work of Blue-Tongue Films, carries through with that tradition here. That she’s able to so deftly concoct a mix of wildly different tone, from fanciful whimsy to downright traumatic (and make it all go down with a light touch) is quite a feat to pull off. With modern melodies infused into François Tétaz’s playful score and a colorful agility from cinematographer Stefan Duscio (Upgrade), the film has a briskness that may have one leaving with more of a shrug than wrestling with the ideas it presents. But in crafting an entertaining puppet show come to life, Foulkes has a promising directorial career ahead of her.