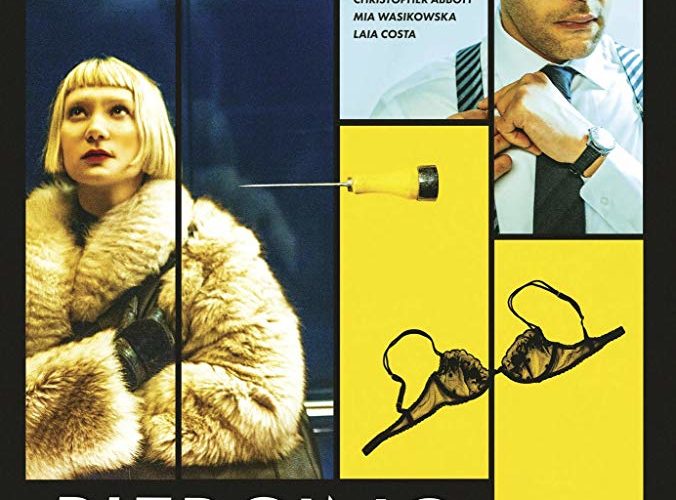 A marriage between the gorgeously disturbing imagery Nicolas Pesce delivered via his debut The Eyes of My Mother and the surreally warped sensibilities of Audition author Ryû Murakami definitely piqued my interest as far as the former’s adaptation of the latter’s novel Piercing. This psychological thriller concerns new father Reed’s (Christopher Abbott) need to briefly leave his wife (Laia Costa’s Mona) and the baby he can’t stop himself from wanting to stab with an ice pick in order to find a prostitute with which to cleanse his dark thoughts of murder elsewhere. Maybe he’s a serial killer or maybe this urge is the culmination of not yet having put metal into flesh. Either way, his carefully laid plans will inevitably go awry so our voyeuristically perverted Gods may laugh.

Let’s face it: watching Reed rock his screaming baby until it stops to stare him in the eye and say, “You know what you have to do” in an impossibly demonic voice must be followed with at least a giggle. Add the colorful and obviously miniature-made cityscape as exterior exposition shots and we’re practically being transported from one dollhouse to another inhabited by unsuspecting women and the anxiously compulsive Patrick Bateman Ken doll desperate to get through a night of carnage he’s scripted inside a little red book. Pesce lends an anachronistically obscure aesthetic to render the whole a more cartoonish laugh riot than even American Psycho‘s satirical bent could. Its theatricality allows a claustrophobic uncertainty to settle in until we question whether reality is involved at all. So we smile during Reed’s test run. He practices the conversational way in which he’ll lead his victim to the hotel bedroom and tie her up under S&M pretenses, miming the assault and bathroom dismemberment only to begrudgingly admit it took too long. You could ask, “Too long for what?” but it will do you no good since there’s no need for an answer. We merely chalk it up as yet another idiosyncratic detail building towards this house of cards’ tumble sparked by heavy indecision. It’s the same with Reed haphazardly wiping surfaces clean with a handkerchief as though that’s enough to hide DNA. These ticks simply let us chuckle at his nervously dumbfounded look when Jackie (Mia Wasikowska) throws a wrench the instant she enters the room.

Pesce is meticulously constructing the perfect murder only to systematically dismantle it for devilish fun. Maybe it’s a spoiler to call Piercing a comedy, but that’s exactly what it is. (Unless my mind is more sadistic than previously thought.) To have Reed sweating with anticipation after Jackie closes herself in the bathroom for longer than he hoped the entire ordeal would last is pure farce. Letting the punch line turn the tables in a way that forces him to switch gears from killer to savior warrants the biggest look of skeptical incredulity we can muster. If you thought The Eyes of My Mother teetered on the edge of being too much, this one works to push its audience further by daring us to storm out from anticlimactic disbelief. This would of course be a mistake, though. Doing so would prevent you from watching as fantasy and dementia take hold to make us wonder what it is that’s actually going on. I’m talking unbelievable accomplices, CGI insect-like viruses crawling around for a host, and blink and you’ll miss them visual insight into Reed’s past with an abusive mother, unshakeable memory of animal cruelty, and homicidal contrition. What began as a coldly calculated mystery quickly devolves into a giallo homage (complete with repurposed Goblin track and black gloves) that comes off as absurd as it does violent. Reed and Jackie’s dynamic becomes more waltz with alternating lead than hunt between predator and prey. One seeks release with a weak constitution while the other delights in playing with fire.

Is its being a good time enough to deem it a success? That’s left in the eye of the beholder. I’d say yes — but just barely. While a step-back in overall execution from his debut, however, it is a step forward in cementing Pesce’s willingness to bring a unique sensory experience to the big screen. He’s taking risks with obtuse subject matter that possess as much potential to alienate as they do to bring people together. And studios (boutique or not) are bankrolling that vision to capitalize on its independent flavor. Piercing has cult classic written all over it because it’s difficult not to imagine watching with a packed theater of like-minded hedonists looking for amusement. He’s intentionally delivering humor that “bad” horror from decades past provided unintentionally. And right when you think it’s all going to become yet another misogynist’s wet dream, he lets his women in on the game to prove even more sinister than Reed. The toy ultimately gains control with enough defiance to think revenge and intent to think everything was planned from the start. We know that’s not the case considering the discoveries made along the way and multiple chances for escape on both characters’ parts, but the fact Pesce lets his cast imply as much through performance shows his desire to keep us on our toes. That is where he truly succeeds because it does prove impossible to know where things might go next thanks to the physical manifestation of internal turmoil and the hallucinatory blur between life and psychosis.

Abbott and Wasikowska are a big part of this with their left-of-center depictions of clichéd stereotypes. The way the former cautiously moves about while second-guessing himself will have you knowing that he must use great antiperspirant to keep his clothes from being drenched with sweat. By contrast the latter is almost always sure of herself, playing with his anxieties from the get-go whether it be dialing up the school girl innocence, purposefully leading him around in circles, or engaging in self-mutilation. And both hold an affinity for or fetish in puncturing skin to feel the blood and/or pain that gets released. This is how they mark those days of pure unbridled aggression: with a grin and scar. Whether the second prize is physical or mental is their choice.