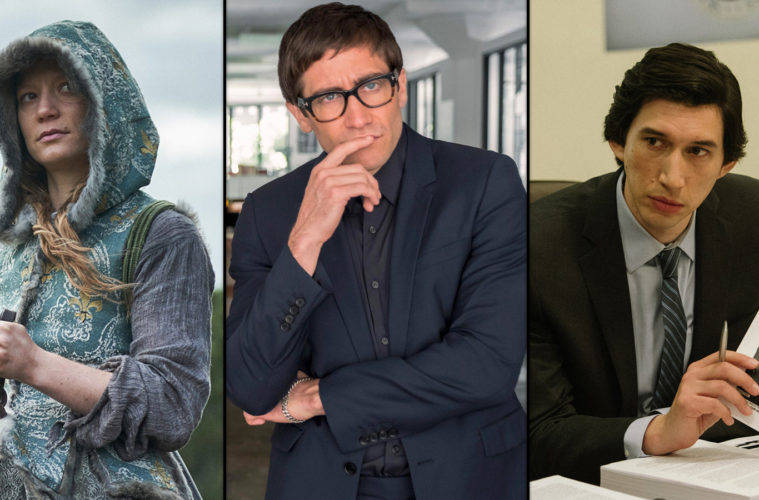 Comprising a considerable amount of our top 50 films of last year, Sundance Film Festival has proven to yield the first genuine look at what the year in cinema will bring. Now in its 41st iteration, we’ll be heading back to Park City this week, but before we do, it’s time to highlight the films we’re most looking forward to, including documentaries and narrative features from all around the world.

While much of the joy found in the festival comes from surprises throughout the event, below one will find our 20 most-anticipated titles. Check out our picks below and for updates straight from the festival, make sure to follow us on Twitter (@TheFilmStage, @jpraup, @djmecca, and @joshencinias), and stay tuned to all of our coverage here.

From Brother’s Keeper to his Paradise Lost films to Metallica: Some Kind of Monster, documentary extraordinaire Joe Berlinger is returning to the realm of narrative feature filmmaking for the first time in nearly a decade with this drama about serial killer Ted Bundy starring none other than… Zac Efron. Even in less-than-stellar films, the actor proves his charisma, so it’ll be intriguing to see what he does with more dramatic material here in the film which looks to explore more of his family life and his unassuming wife, played by Lily Collins.

19. The Sound of Silence (Michael Tyburski)

One of the more compelling-sounding films in the Sundance Film Festival is the directorial debut of Michael Tyburski, which follows Peter Sarsgaard as a self-described “house tuner.” His career path takes him into people’s homes (notably Rashida Jones’ character) to analyze their aural experience and if it’s creating a disturbance in their lives. The director was a feature film fellow for Sundance Institute’s Music and Sound Design Lab at Skywalker Sound, so with this plot and that experience, we imagine this will be something special.

18. We Are Little Zombies (Makoto Nagahisa)

After winning the top short film prize at Sundance two years ago with And So We Put Goldfish in the Pool., Japanese director Makoto Nagahisa returns this year with his feature-length debut We Are Little Zombies. Following a group of thirteen-year-olds whose parents die, they form an eccentric rock band to help heal the wounds. A seasoned director in the world of commercials and music videos, we imagine this will be a kinetic, dazzling debut.

17. Knock Down the House (Rachel Lears)

Every year there are so many timely documentaries at Sundance, one always hopes they aren’t rushed to the finish line and have at least a bit of perspective with the subject(s) they are depicting. One that has our attention is from Rachel Lears as she focuses on four women in the primary race for Congress: Alexandria Ocasio-Cortez, Amy Vilela, Cori Bush, and Paula Jean Swearengin. When it comes to AOC rightfully disturbing the peace in her new position, we imagine Lears may still be editing this one right up until the premiere.

Two years ago, Justin Chon brought his L.A. riots drama Gook to Sundance Film Festival where it picked up the top prize in the NEXT section. He’s now back with his follow-up Ms. Purple and he’s stepped up to U.S. Dramatic Competition. Once again focusing on Los Angeles, this story follows Kasi (Tiffany Chu) who works as a doumi girl in Koreatown’s karaoke bars as she reconnects with her family when her father’s caretaker departs. Chon showed his gift for cultural specificity with his debut and we imagine it will be carried through with his second feature.

For many, the Satanic Temple only enters their radar when they make headlines, whether it is suing the producers of Sabrina for using the likeness of their deity or putting their stamp of approval on The Witch. At Sundance this year, one can dive much deeper into the religious movement with a new documentary from Penny Lane, the filmmaker behind The Pain of Others, NUTS!, Our Nixon, and more. Lane has always been a playful director and we can’t wait to see what devilish fun she has in store here.

Five years ago, David Wnendt brought his debut Wetlands to Sundance and it was among the talk of the festival for its shocking take on the coming-of-age story. He’s now back this year with something that at least on the surface might be a bit more palatable, but hopefully retain his distinct touch. Starring Jenny Slate, Zach Galifianakis, Alex Sharp, and Gillian Anderson, The Sunlight Night follows a woman who has reached a dead end in her life in America and ventures to a Norwegian island for an art residency that becomes much more strange then expected.

13. Them That Follow (Britt Poulton and Dan Madison Savage)

An outsider’s look into strange communities seem to be a running theme when it comes to Sundance premieres and the most promising one this year is Them That Follow. Starring Olivia Colman, Kaitlyn Dever, Alice Englert, Jim Gaffigan, Walton Goggins, and Thomas Mann, the film follows a community of Pentecostal snake handlers in rural Appalachia. If that’s not enough to sell you, Goggins plays the lead pastor of this insular, strange group, which should prove a meaty role.

Oscar-nominated filmmakers Steven Bognar and Julia Reichert return to the arena of blue-collar industry with their latest documentary, American Factory. Back in 2014 at a defunct General Motors plant in Dayton, Ohio, a Chinese billionaire opened a Fuyao glass factory, which meant thousands of new jobs in the area. Bognar and Reichert were on the ground to capture the excitement, the cultural collision, and more in what promises to be a documentary that’s a microcosm of our global marketplace.

Australian actor-director Mirrah Foulkes (who you may have seen in Top of the Lake, Animal Kingdom, and Sleeping Beauty) makes her feature-length debut with Judy & Punch. Starring Mia Wasikowska, it follows her story as she takes revenge on a cohort in a marionette theatre act they run after he beats her senseless. Joining the recent streak of movies in which the actress ingeniously humiliates self-serving men (after two other Sundance films, Piercing and Damsel), this is a thematic trilogy we can get behind.

A few years back the directing duo known as the Daniels debuted Swiss Army Man to an unsuspecting Sundance audience and, being at the premiere, it was quite a sight to behold. Now one-half is back with a new feature, once again backed by A24. Daniel Scheinert’s The Death of Dick Long follows a trio of bandmates in a small Alabama town and after one dies, things get quite mysterious. Part of the NEXT section, we imagine this will be one of Sundance’s strangest trips.

9. To the Stars (Martha Stephens)

One of the most delightful Sundance premieres I’ve seen in the last few years was Land Ho! and now co-director of that buddy adventure, Martha Stephens, is back with a drama set in 1960s Oklahoma. Another buddy adventure of sorts, it follows a reclusive teen and her mysterious new friend as their small-town gets shaken up. With it being seven years since Stephens’ last solo feature, Pilgrim Song, we’re eager to see her back in the director’s chair in one of the most compelling U.S. Drama competition premieres.

Shia LaBeouf is once again getting meta this year, starring in Honey Boy, a film based on his own experiences with his alcoholic father, played by LaBeouf himself. Playing the character inspired by LaBeouf across different time periods in his contentious upbringing as a childhood TV star is both Lucas Hedges and Noah Jupe. Directed by Alma Har’el, who last gave us the beautiful documentary Love True, and shot by The Neon Demon cinematographer Natasha Braier, we imagine this will be the talk of Sundance.

After earning acclaim for their horror feature Goodnight Mommy, directors Severin Fiala and Veronika Franz are back this year with what looks to be an even bigger break-out. The Lodge, starring Riley Keough, Richard Armitage, Jaeden Lieberher, and Lia McHugh, follows tells the story of a young woman and her new stepchildren who are menaced by a terrifying supernatural force while spending Christmas in their remote cabin. Shot by Yorgos Lanthimos’ frequent cinematographer Thimios Bakatakis, this has the makings of a chilly fright fest.

If the jump scares and horror setpieces of Paranormal Activity or The Conjuring franchises were exchanged for an authentic reckoning of the tangled emotions the departed may leave behind, you may have something close to Light From Light. Paul Harrill’s follow-up to his remarkable debut Something, Anything follows Shelia (Marin Ireland), a single mom living in rural Tennessee, working at a car rental service by day and a paranormal investigator at night. With her passion for ghost hunting sparked by a prophetic dream, she’s taken on a new case involving Richard (Jim Gaffigan), whose wife Susanne died a year prior in a plane crash and peculiar occurrences are happening in his home.

The work of Scott Z. Burns has been most seen in his fruitful collaborations with Steven Soderbergh, and now the writer has gotten behind the director’s chair for his own drama. Starring the powerhouse cast of Adam Driver, Annette Bening, Jon Hamm, Ted Levine, Maura Tierney, and Michael C. Hall, The Report dives into the uncovering of the CIA’s post-9/11 interrogation tactics, as discovered by Senate staffer Daniel Jones, played by Driver. After Adam McKay’s recent disaster, hopefully this is a more insightful look into the Bush era.

While his last film Roman J. Israel, Esq. didn’t earn as much acclaim as Nightcrawler, this writer found it to be a more fascinating, idiosyncratic character study. Dan Gilroy is now back with his third film, Velvet Buzzsaw, which stars Jake Gyllenhaal, Rene Russo, and Toni Collette in the story of the strange world of fine-art trading. In the trailer, what begins as a cheekily goofy satire soon turns into a strange-looking thriller with horror elements sprinkled in, something that hopefully proves true in the final film.

After gaining attention with his horror feature Under the Shadow, director Babak Anvari is returning to Sundance Film Festival this year with a higher-profile project. Starring Armie Hammer and Dakota Johnson, Wounds follows a bartender in New Orleans who picks up a phone left at his bar and a series of strange, disturbing occurrences begin to unravel. Backed by Annapurna Pictures, it will be intriguing to see two of Luca Guadagnino’s collaborators team for what looks to be a dark psychological mind game.

The long-awaited return of Exhibition and Archipelago director Joanna Hogg, Souvenir is our most-anticipated world premiere at Sundance Film Festival. While Tilda Swinton appears in the film, it is actually led by her daughter Honor Swinton Byrne, who stars alongside Tom Burke. The story follows a young film student who finds her first love in a mysterious man as a dangerous relationship begins. Already picked up by A24, we’re eager to see Hogg’s singular, observational approach in this 1980s-set drama.

With nearly 100 more films in the lineup, there’s much more we’re looking forward to, including the Mica Levi-scored Monos, the archival footage doc Apollo 11, the Midnight premiere Mope, a look at Ridley Scott’s masterpiece with MEMORY–The Origins of Alien, the NEXT titles The Wolf Hour and Selah and the Spades, as well as a handful of bigger films, including the Opening Night selection Native Son, Troop Zero, Sweetheart, Late Night, and The Farewell.