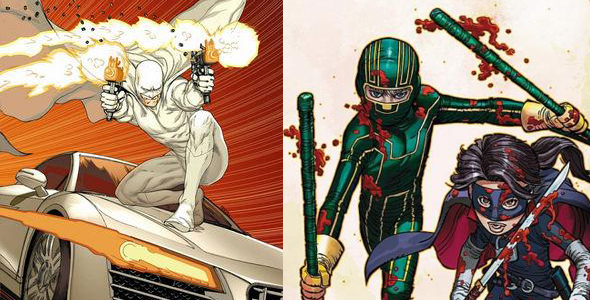 Mark Millar is a man of hope, a true optimist. Not only does Millar see the glass as half-full, he can’t conceive of the glass being empty. Ever.

Millar is a comic book author who is known (arguably infamous) for creating comic book properties with the express desire to sell them as movies. His latest film was the action-and-obscenity-packed Kick-Ass, which earned about $250 million less than his previous venture, Wanted. Despite this, Millar is confident Kick-Ass 2: Balls to the Wall is a go, telling BBC Radio Five:

“The estimate is [Kick-Ass] will do 100 to 150 million on DVD based on the American sales, you know, so it’ll end up making a quarter of a billion on a 28 million investment. So it should be okay. So the sequel’s greenlit, we can go ahead and do the follow up now, you know. The first made so much compared to what it cost it would be crazy not to.”

There are several worrisome elements here. For one, the DVD has been out since the beginning of the month and earned only $16,275,154 to date according to The Numbers. Beyond that, Box Office Mojo estimates the film’s production costs were closer to $30 million, and some speculate that with P&A costs $40 million is more likely. Ultimately, the film’s done well – but nowhere near well enough to guarantee a sequel.

The idea of this film being greenlit without a script in place is dubious, and there’s little likelihood one exists with Kick-Ass‘s co-writers (Matthew Vaughn and Jane Goldman) working on the highly anticipated X-Men: First Class. This is something Millar half-acknowledges in an MTV interview posted yesterday:

“Matthew just wants to get ‘X-Men’ done next year then hopefully we’ll just go straight into ‘Kick-Ass 2,’ that’s the plan.”

I’m curious if Vaughn would return for the sequel when he himself has declared that the comic book genre is on its way out.

For his next feat, Millar presents Nemesis, a comic book whose pitch is basically ‘What if Batman was a total prick?’ The film is in development, and Millar claims it will be a big production with a hat trick of A-listers, saying to BBC:

“Tony Scott, brother of Ridley Scott… I just got a call from him, literally about a month ago… it was one of those very surreal things. This is a $150 million budget… he said “Who do you fancy for it?”… I said “I dunno, Brad Pitt, Johnny Depp” so he said “That’s good, we’ll give them a call.”

Let’s ignore that Millar felt the need to explain who Tony Scott is. While Scott is signed on for Nemesis, Scott’s last film, The Taking of Pelham 1 2 3, had a budget of $100 million, while his upcoming Unstoppable, has a budget of $90 million. So, I’d like to know from where Millar is getting this estimate. Anyway, this is not the first time Millar‘s told the public he wants Depp and Pitt on board. He recently told Empire:

“With Nemesis, you’ve got two great roles for two A-list stars…You’ve got Holmes versus Moriarty here or Batman versus The Joker, so each one has got to be a $20 million actor, really. I think you could go for the A+ list and get Johnny Depp as Nemesis and Brad Pitt as Blake Morrow.”

So, if Millar‘s estimate is correct, the fee for his leads alone will be $40 million – the cost of Kick-Ass.

Now the film is in the works, but it’s doubtful it will be the tent pole attraction Millar‘s selling to the press. As a big fan of Kick-Ass, I’m hoping for a sequel. Plus my comic-nerd friends say Nemesis could be a great flick. But the more Millar speaks to the press the more I wonder…

What do you think? Will Kick-Ass 2 make it into production? Will Nemesis score big names and a bigger budget? Will Millar and his movie ideas hold your interest?